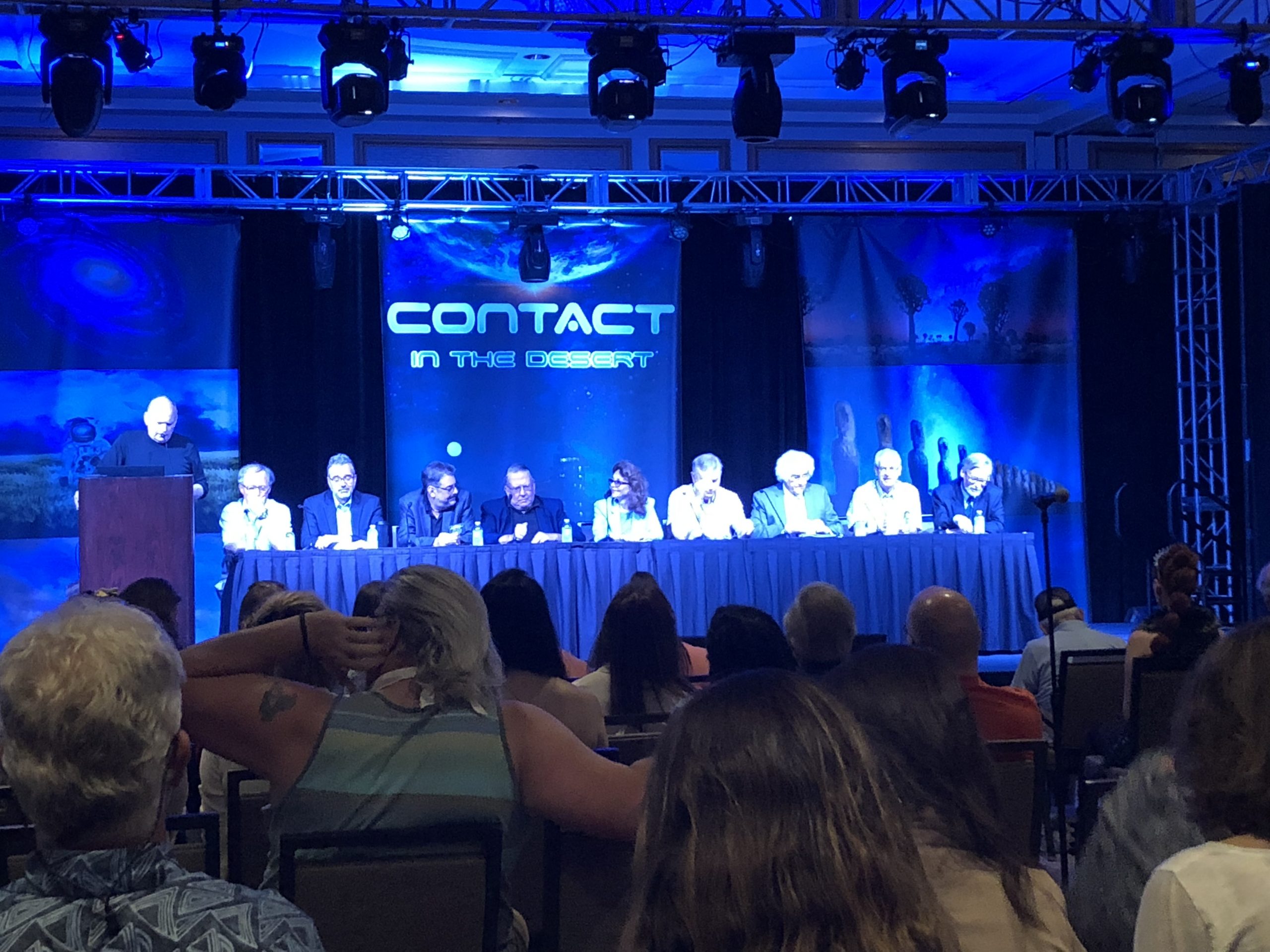 But oh, it was so much more. Through a weekend of panels, workshops, experiences, and vendors, Contact in the Desert proved to be a fascinating look at the modern mythology of the alien experience. We in the press were able to experience a weird, fascinating subculture that surrounds aliens and the abductee and contact phenomenon. Oh, and a little bit of governmental disclosure thrown in. Perhaps the best way to revue this event is to focus on 2 very different panels that seemed reasonable but consistently went off the rails. I’m not a believer. Logically there MUST be extraterrestrial life. And signs of organic molecules are all around our universe. The issue at hand, though, is visitation. There really isn’t much evidence to look at aside from eye witness testimony. I would gladly accept anything at Contact in the Desert IF reasonable evidence was presented. IF… At the Ancient Aliens panel, featuring many researchers from the show of the same name and hosted by George Noosy (Coast to Coast AM), the discussions ranged from the biblical to the hardcore data research. I was happy to hear about interesting research into megalithic structures and finds in Africa and new info about known ancient locations. Could there be a room under the Sphinx? Is the Sphinx thousands of years older than we believe?

Aaaand then a panelist or audience member brings up the unbelievable and derails interesting research. Comments about channeling alien spirits or people with weird conspiracies about alien DNA clones really took me out of it. Maybe I’m too scientific or too much of a fan of hard sci-fi, but the weird spiritual stuff or nonsense really caused my eyes to roll. If you’re going to claim you can cure cancer in your astral form, you probably shouldn’t be on a panel with published archaeological researchers. Save that for a weird workshop. Maybe. In the words of Nerdbot Girl DarthKitty, “Keep the spiritual stuff and science stuff separate. Maybe they can have a Spirits in the Desert, too.”

Still, DarthKitty and I had a blast. The venue was beautiful. We bought a great gray alien computer generated art print. We picked up some jewelry. I met and talked with Georgio Tsoukolas (Ancient Aliens) and Travis Walton (the abductee of Fire in the Sky fame). Everyone was nice and wanted to talk. And in the middle of all the high strangeness, everyone talked to DarthKitty about her space cat dress.

The struggles of being a Nerdbot Girl? *shrug* In the Disclosure panel I asked a simple question: If aliens have been here in historic times, and are here now, where’s the trash they must be leaving behind?

The response: Aliens have a magic device that takes every molecule back with them. That’s why we don’t have alien styrofoam containers or invasive alien grass.

And there’s the real point of Contact in the Desert. Like any other pop culture convention, it’s for true believers and hardcore fans. And in that way, it was a great time. I also saw hints of science and mainstream acceptance trickle in. Tsoukalos called out flat earthers and those who still support known fakes and forgeries. And did I mention our sweet gray alien print? Go to Contact in the Desert. If you’re a believer, attend the workshops and maybe the great experiencer round table. If you’re a person, like me, who grew up on In Search Of and Chariots of the Gods by Erich von Daniken but have since moved on the series search for life via NASA, still go and experience the mythology and community.

And buy DarthKitty and I some orgone power amulets or a copy of a documentary about Skinwalker Ranch, please!

Geoff Johns Has A New Role In The DCEU