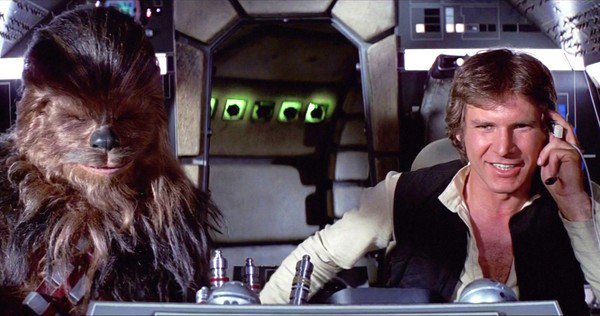 Where is O.G. Star Wars?

With Solo: A Star Wars Story coming out May 25th, it would be nice to get together with friends and revisit the original trilogy that made us all love Han Solo. When sending out invites for a watch party, the question that keeps coming back is this: “Which version do you have?” Seeing as my mom threw out our VHS copies, the only version I can easily get my hands on are the dreaded “Special Editions”. For those not in the know, George Lucas made several changes to the theatrical versions which many die-hard fans hate, such as: adding a Jabba scene to A New Hope, adding an alien jazz-rock song to Return of the Jedi, and worst of all, having Greedo shoot first and miss. HAN SHOT FIRST!!!!!!!!

It saddens me to think there is a whole generation that thinks Han Solo wouldn’t shoot someone under the table like the rogue, space-cowboy he is. You would think that since Disney bought Lucas Film and the Star Wars franchise that fans would get the version that they want. Well it’s not so simple because 21st Century Fox still has distribution rights for the first six Star Wars films. I looked around to see if maybe Fox stuck out the original versions to capitalize on Solo’s upcoming release, but no such luck. In fact, when looking on Amazon, YouTube Movies, and other legal downloading sites, they hide the fact that their versions are the Special Editions and there are many angry reviews from those who were tricked. It would seem George Lucas still has the power at Fox to keep the older versions locked up.

When I started writing this article, it seemed like Disney buying 21st Century Fox seemed like a done deal and that’s how we’d get the originals released. However, it would seem Comcast has made a last minute bid to buy Fox and has sweetened the pot by offering all cash. Disney can still make a higher bid, but might wait to see if the AT&T buyout of Time-Warner goes through because if it doesn’t, Comcast doesn’t have a chance legally. I of course want the originals to go to Disney, because if Disney has made one thing clear, George Lucas has no say in what they do with Star Wars. Even if there is some dusty contract saying that George holds sway over what version can be released, Disney will just buy him out because they have all the money. Even if Comcast buys Fox, Disney still might still try to buy the distribution rights to the original Star Wars.

I predict Disney will use the original versions of Star Wars to launch the Disney Streaming Service. You see, even though there are many Disney fans that will sign up just to have access to their catalog, it’s going to take a lot more than The Black Cauldron to get many to cough up that monthly fee. There’s people who already own the Marvel, Pixar, and Disney films they want, so why pay to own them twice? On the other hand, having the Original Star Wars Trilogy streaming in HD would turn a lot of heads. It would be like the move CBS All Access did: lure people in with a beloved sci-fi series (Star Trek: Discovery) and hope they keep their membership for new Survivor episodes (the Disney equivalent being… Duck Tales?)