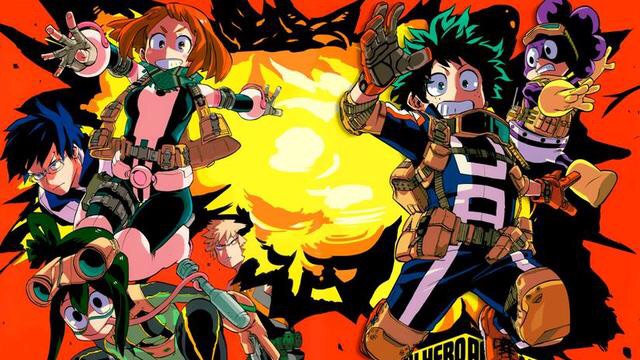 This series came out around the same time as My Hero Academia, so it’s no surprise if you watched this in tandem or if you missed the hype train entirely. Little Witch Academia is about a clumsy girl named Akko who dreams of being like her idol, Shiny Chariot. She goes to a magical academy to become one of the greatest witches of all time. It’s a no brainer why this is the first suggestion on the list. The main characters aren’t identical by any means, but their “dramatic needs” are. (This is my favorite screenwriting term, look it up!) In terms of overall quality, Little Witch Academia is a great recommendation as a stand alone. It’s also been referred to by many as “an anime you can tell someone to watch who hasn’t seen a lot of anime before”. If the first season of My Hero Academia was fun to watch, then you’ll absolutely feel the same way about Little Witch Academia. (It’s also basically the same in the title alone.)

You can watch it on Netflix and learn more about it here. This is, without exaggeration, the shojo manga version of My Hero Academia. Gakuen Alice was a series that I unexpectedly fell in love with. It is a long running shojo manga series about a ten year old girl named Mikan who isn’t good at much, except for caring about her friends, who tries to follow her best friend who suddenly moves away to a prestigious boarding school. Upon arriving, Mikan meets a mysterious teacher who soon teachers her that she has a superpower and can enroll immediately.

This series is an even mix of Little Witch Academia, Cardcaptor Sakura and Fullmetal Alchemist. For the majority of the series it is extremely fluffy and light with occasional dark undertones thrown in. When the catalyst is reached however, it becomes extremely plot driven and serious pulling MAJOR plot twists. The anime itself barely even begins to cover the true meaning of Gakuen Academy, opting to only cover all of the (still extremely enjoyable) sweet elementary school antics. It’s a favorite of mine, merely because it’s such a hidden gem. Most people don’t expect what happens in the final arcs of the manga, even when it’s happening right before your eyes.

You can watch it on Crunchyroll and learn more about it here.

Some Real Big News for “Robotech” and…

Practice ABCs and 123s with These Pokémon Primers

If you haven’t gotten into the manga ye t, and you’re reading this before the 3rd season comes out, chances are you don’t know that My Hero Academia has a lot of emotional and dark content. If that’s one of the aspects that draws you to the series, definitely check out Charlotte. This is another masterpiece by Jun Maeda of Clannad, Air and Angel Beats! Fame. By watching any of his pieces of work, you’re almost guaranteed to cry.

This is about a group of high schoolers with superpowers, but in this universe, having a superpower isn’t as celebrated of a thing. It’s more of a curse actually. This series is loaded with twists, turns and spoilers at every episode so if you want something off course from the normal superhero drama, this is a great option for you.

You can watch it on Crunchyroll and find more about it here.

If any other title on this list hasn’t sparked your interest yet, One Punch Man will. It’s a great series if you enjoy light-heated shounen action series, likable protagonists, “r ags to riches” journeys and most of all, punching things. One Punch Man is about a normal every day man who is bored with his life, so he pushes himself to the limit every day to become incredibly strong. He fights villains and makes important friendships along the way. Both main characters of each series go through a similar structured journey, along with the people that accompany them. This is an extremely fun series and is known for it’s amazing sense of humor and boundless creativity.

You can buy/watch/read the anime and manga here (at VIZ)   and also on Hulu, you can learn more about it here.

Now that you know how to fall further down the rabbit hole of superhero anime hell, I wish you luck on your journey! All of these series are ready to stream on Funimation, Crunchyroll, Hulu and Netflix! Don’t forget to watch Anime Weekly every Wednesday at 9pm, go to Anime Pasadena and check out Nerdbot for more!