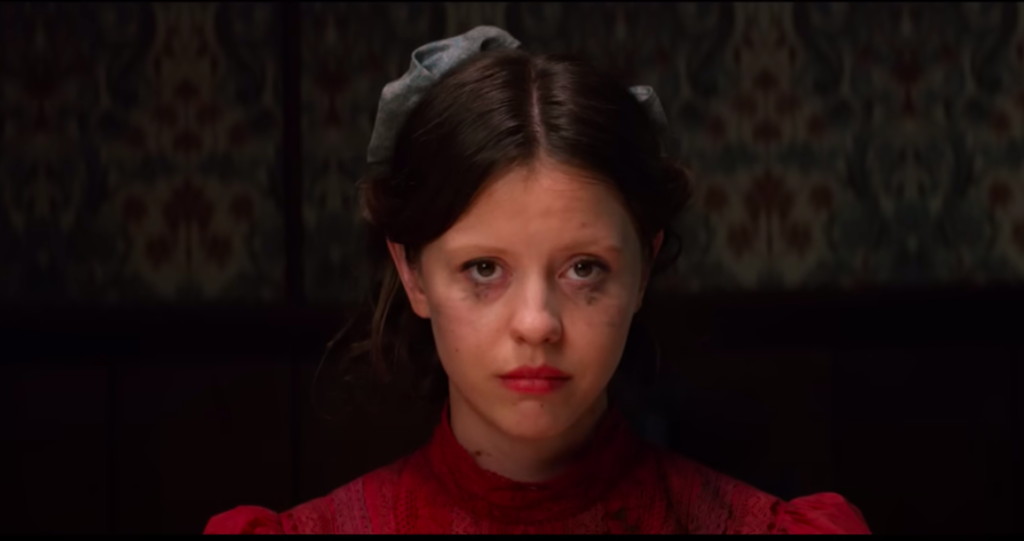 If you would have told me 6 months ago that the now “X” franchise would become one of my favorite horror franchises of the year, I would’ve laughed in your face and called you crazy. But here we are, reeling from the overwhelming (in a good way) experience of “Pearl,” a surprise prequel we didn’t know we wanted but manages to be even better than its predecessor. Not only that, but “Pearl” elevates “X,” an already solid, subversive slasher to an unrecognizable level in ways I don’t even think we’ve fully comprehended yet. We are witnessing a filmmaker in Ti West discover his muse in Mia Goth in real time, and together they build a world of period pieces and deeply complex genre films that I for one cannot get enough of now. “Pearl” is an unforgettable descent into madness, powered by incredible production and filmmaking, and a star making performance from Goth.

Written and directed by West and co-written with Goth, “Pearl” serves as a direct prequel to “X,” following the murderous old woman in her younger days and filling in some gaps of how the titular character Pearl came to be who she is when we first met her years later. Taking place in 1918 at the end of World War 1 and the height of the Spanish Flu, Pearl (Goth) lives on a remote farm in Texas with her overbearing and stern mother and her near-paralyzed from illness father. With her husband Howard at war with no word, she is forced to care for her father and tend to the farm. Pearl is desperate for a different life, one far, far away from the farm. She believes herself to be a star, and wants the life of the dancing girls in the pictures. As her life becomes more and more unbearable on the farm and her mother continually standing in her way to prove her worth to the world, Pearl has a darkness rising her that begs her to stop at nothing to get the life she’s always wanted. Even if it means bloodshed.

Similar to its predecessor, West perfectly captures the time period with which “Pearl” exists, expertly injecting vibrant colors and purposefully picturesque backdrops against heightened melodrama. We are engrossed not just in the time period of the early 1900s, but in the rising art of film of the time as well. Think demented “The Wizard of Oz.” West also uses the events of The Spanish Flu to subtlety deliver biting social commentary of our most recent pandemic, managing to make it feel as relevant to the story 100 years ago as it is today. West does this in the same breath without ever overshadowing one over the other. “Pearl” is explicitly set in the time it wants to be in, but is never limited by it. The film’s production and cinematography is simply excellent, and allows for “Pearl” to take its time to reach its fever pitch climax. West is incredibly patient, letting the atmosphere swell and swell and swell until finally, like a powder keg it explodes with violence, gore, and brutal, brutal kills. The body count is rather humble but highly effective, largely because west is so keen to take his time exploring the mental and psychological breakdown of Pearl before getting to the nitty gritty of pitchfork murders.

“Pearl” is also crafted in such a way that it requires a unique watch order of its connecting films. I had a lot of people ask which film they should see first, “X” or “Pearl,” and the short answer is yes. Chronological order will absolutely make for a great movie watching experience, and you’ll be able to follow the surface level trajectories of all of the connective stories. But seeing them in the order they were released does something I don’t think any other franchise has done, in that is actually forces you to watch “X” twice. See, if you watch “X” first, then “Pearl’s” easter eggs littered throughout hit harder, and influences a very complex and troubled individual and why she is the way she is when we meet her. But “Pearl” is so goddamn effective and expertly made, that if you watch “X” again afterwards, you will quite literally be watching an entirely different film you didn’t even know was there. “Pearl” is so good the second watch of “X” will be like watching it for the first time, again. West packs so much beneath the surface that you need three watches of two films in order to dig deeper in the nuances and complexities of it all. Yes, “Pearl” is that effective, that purposeful, and that rich with story and themes.

Of course, none of this ambition and layering works if we aren’t fully invested in the character, and my god, does Mia Goth deliver. Goth’s Pearl is delightfully unhinged, hauntingly delusional, disturbingly charming, and unexpectedly vulnerable. Like her character, Goth’s performance in “Pearl” is downright star making, and it is criminal that horror films are ostensibly excluded from most prestigious awards. She deserves every single one of them here. She takes huge swings and disappears into every facet of this deeply disturbed character, and Goth is daring and formidable here. There are few people onscreen who can make you somehow root and empathize with a full blown, sexual deviant psychopath, completely void of empathy herself. There are even fewer who can deliver a 6 minute, unflinching monologue in a lingering close up and completely captivate every single audience member with every word uttered. Goth is the lynchpin of “Pearl,” and while everyone else in this small cast are terrific, it is Goth and Goth alone that puts herself on the map as one of the best actresses of the year.

I am not overselling this, nor can I stop thinking about how incredible her performance is here. There is an unwavering shot that lasts for minutes (and I do mean literal minutes, not a seconds that feel lingered on) that is just Goth smiling at the camera unnervingly, with tears eventually streaming down her face without ever breaking her disturbing ear to ear smile and gigantic, unblinking eyes. “Pearl” burns this image into your psyche, and while every instinct is telling you to look away, you simply cannot. This is announcement, a statement performance and West displaying his muse with complete trust in her abilities. “Pearl” is proof that this is Goth’s world now, we’re all just living in it. I’m calling it now and taking the over that Goth wins an Oscar within the next three years. She is THAT damn good, and “Pearl” packs a wallop of a performance that will be talked about and analyzed for years to come.

To that point, so will “Pearl” and by proxy, “X.” The amount of layering, commentary and purpose West has injected into something as simply as a slasher franchise would take countless essays and studies that far exceed a simple review. There is so much I want to address and discuss, but we would be here all day and I’d be taking up precious time that you could be spending seeing the film yourself. “Pearl” does so much for a surface story so simple and intentionally over the top, and every layer that gets pulled back uncovers another treasure trove of ideas and filmmaking craftsmanship. And there’s still more to come, because West already has the third film in the series, “Maxxxine” locked and ready to release next year. The duo of West and Goth is something truly special, and “Pearl” puts it all on display and demands that you see it all through to its inevitable conclusion.

I really liked “X,” but I absolutely LOVED “Pearl.” The more it rattles around in my brain the more I love it, and the more I fall in love with its predecessor. Whatever West and Goth want to do, I’m all here for it. I don’t even need to know the project, just tell me he’s behind the camera and she’s in front and I’ll be there opening night. “Pearl” is truly that special and thoughtful, and delivers a damn good time at the movies. I highly recommend “Pearl,” and I’m not afraid to admit that is circling the list of my favorite films of the year. Thanks A24!

“Pearl” is now playing in theaters. You can watch the trailer below.