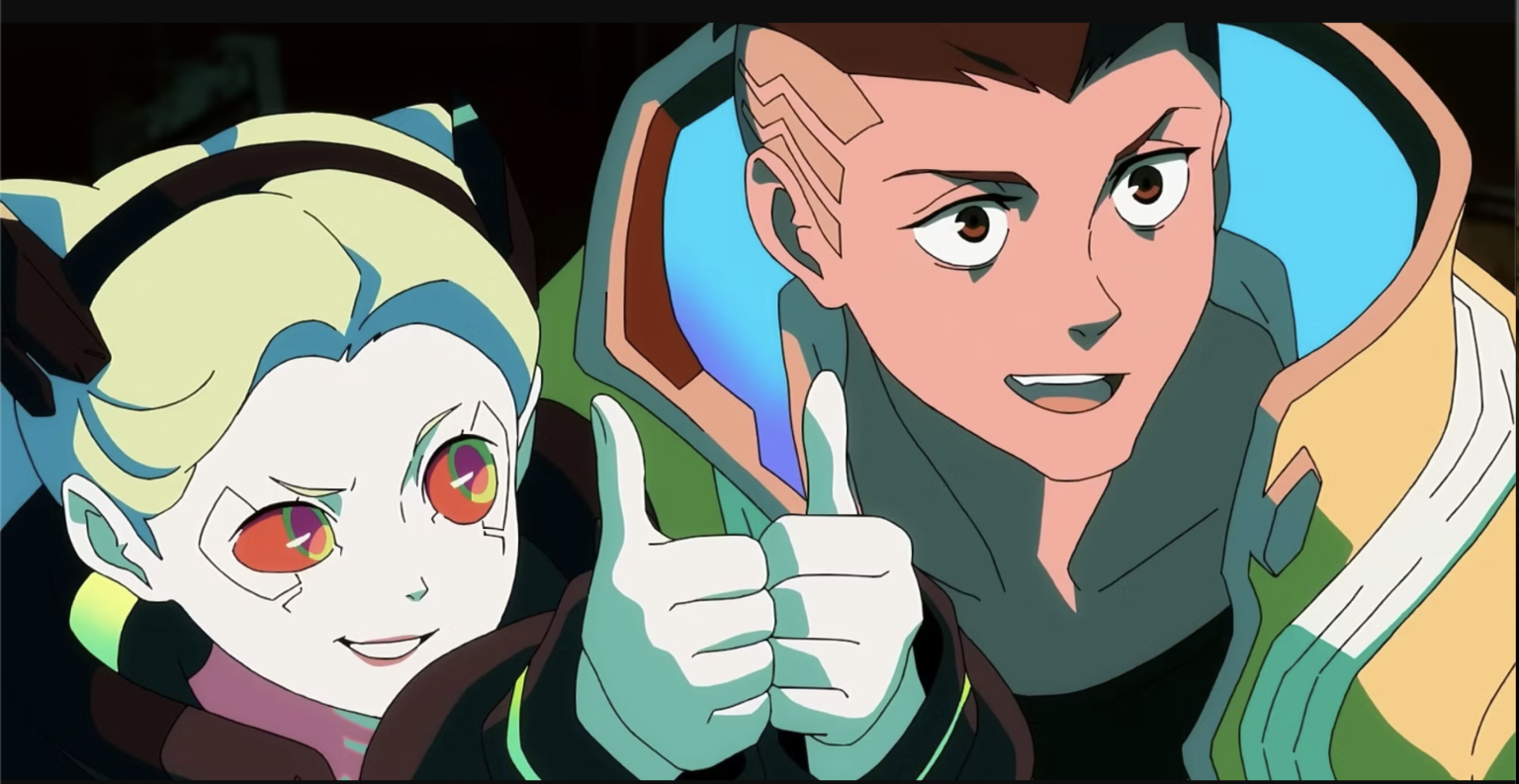 CD Projekt Red and Studio Trigger’s “Cyberpunk:Edgerunners” has finally hit Netflix. Only ten episodes, it’s a quick jaunt through a singular story taking place in Night City. But however short, it was just as sweet. There’s no shortage of Trigger’s iconic action sequences and a plot that’s easy to follow. It comes as no surprise that the anime style suits itself extremely well to the universe of “Cyberpunk 2077.”

Anime’s no stranger to futuristic settings and augmented humans. So the style of it already feels like it’s right at home. The story is one of love, tragedy, and a commentary on the corruption of power. Given how encapsulated it is, I could easily see CDPR creating anthology series of Night City’s goings on.

The story follows David, a misfit teenager, as he navigates the grimy underbelly of organized crime in Night City. The series establishes quickly what kind of world he inhabits. David and his Mom are apathetically left to die by EMTs after a car accident, finding they’re both without health insurance. Only able to get her the lowest level of treatment, David’s mother dies. If that’s not a social commentary, I don’t know what is.

Among her belongings is a piece of military cybertech called a Sandevistan. Which bestows its user with super speed when engaged. At his wits end, David decides to have it installed regardless of the dangers. There are perpetual warnings of it causing cyberpsychosis – a degeneration of the brain from overuse of cybertech.

With nowhere to go, no money, and no family, David finds his way into the fold of the Edgerunners, cyberpunks that run jobs with high risk and high reward. For David, they become a found family, despite the kind of world they inhabit. He becomes embroiled within the corrupt corporate world that uses cyberpunks to run jobs and take falls if something goes wrong. Which happens in spectacular, explosive fashion.

A Melancholy Tale Against a Cybernetic Backdrop

The mechanical animations and the action are awesome to watch. Several times I rewound scenes just to see how Trigger did it. That snappy, frenetic energy that Trigger employs works so incredibly well for a series where things happen quickly and violently. The show thrills with gory action and explosive visuals, but leaves you with the melancholy of this story being a blip in Night City. That no one but the players on that particular stage even noticed. Adjacent to David’s story could easily be one of similar origin happening elsewhere in the city limits.

Within it is humanity, though. It’s not just anime bombastics. Even though you don’t spend too much time with the supporting cast, you come to realize that this is the only option for them. That a better life isn’t attainable for cyberpunks. There’s a reason they’ve turned to mercenary work. That all they can do is survive better than someone else. Despite being set in a futuristic, hyper-augmented universe, the theme of social injustice is extremely strong.

The world of Night City as a backdrop for stories that CDPR couldn’t potentially fit into their video game seems like a fantastic way to tell an anthology of stories in this universe. Whether they will remains to be seen, but they seem to enjoy animating stories that they want to tell that couldn’t fit within a single video game. “Cyberpunk: Edgerunners” is a short, snappy story that happens quickly and leaves you a bit sad, and strangely relieved by the end. It’s a fantastic short story that comes and goes outside of anyone’s notice in Night City.