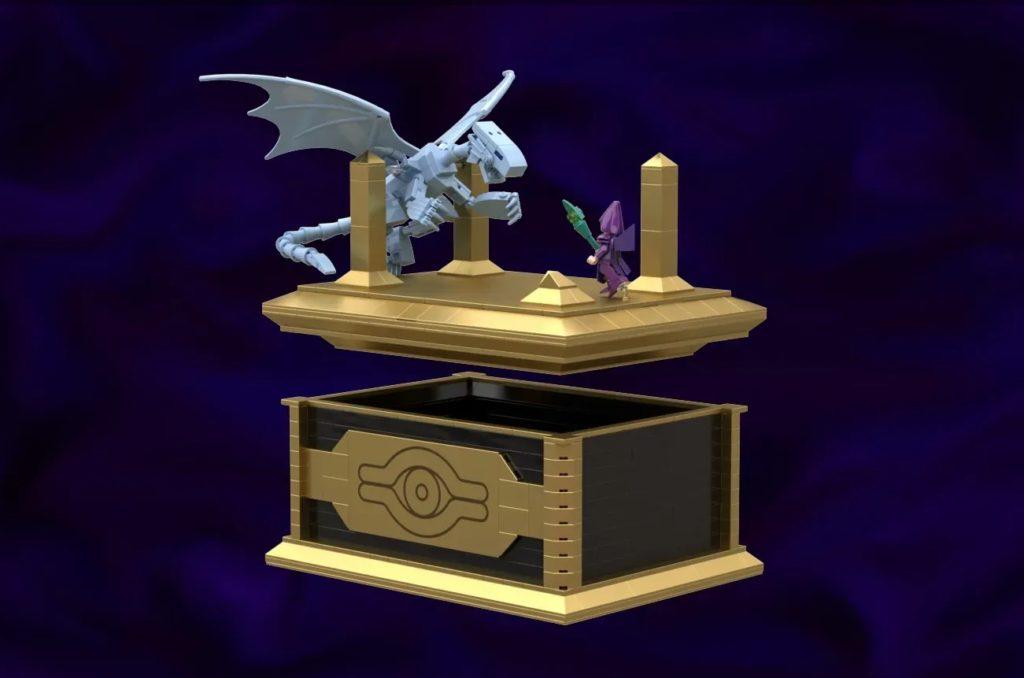 We recently received a tip pointing us to this epic “Yu-Gi-Oh!” LEGO Ideas project. The box, which holds your dueling deck, is sitting at about 6,312 supporters out of the 10,000 LEGO wants to consider pursuing the IP. The good news is there are 335 days left to support this project. So what are you waiting for?

“Yu-Gi-Oh!” is a beloved card-centered anime, and came to the United States in September of 2001. Many fans watched in awe at some of the special twists in episodes would lead to really cool cards and powers. Zero Helix, the designer of the set calls it a, “love letter to the Yu-Gi-Oh! franchise.”

A box for your most treasured cards, topped by the franchise’s two most iconic monsters squaring off: Dark Magician vs Blue-Eyes White Dragon, depicted in their anime colours. I’ve done my best to shape them as accurately as possible! For reference, the inside of the box is 192mm by 128mm by 86mm, large enough to hold your cards (including sleeves) with some extra finger room too.

LEGO Ideas are the best possible way to get our fandoms recognized and sets created of them. Just recently a set was chosen of the Sanderson Sister’s cottage from “Hocus Pocus.” Other sets that have been popular are sets based on “F.R.I.E.N.D.S” and other sitcom classics. Not to mention this would be a great way to honor Kazuki Takahashi, the creator of “Yu-Gi-Oh!,” who recently passed away in a snorkeling accident.

To support this project all you need to do is create a log in account with LEGO Ideas which is as simple as using your Facebook for authentication. Check out the project page here. It’s time to D-D-D-D-Duel!