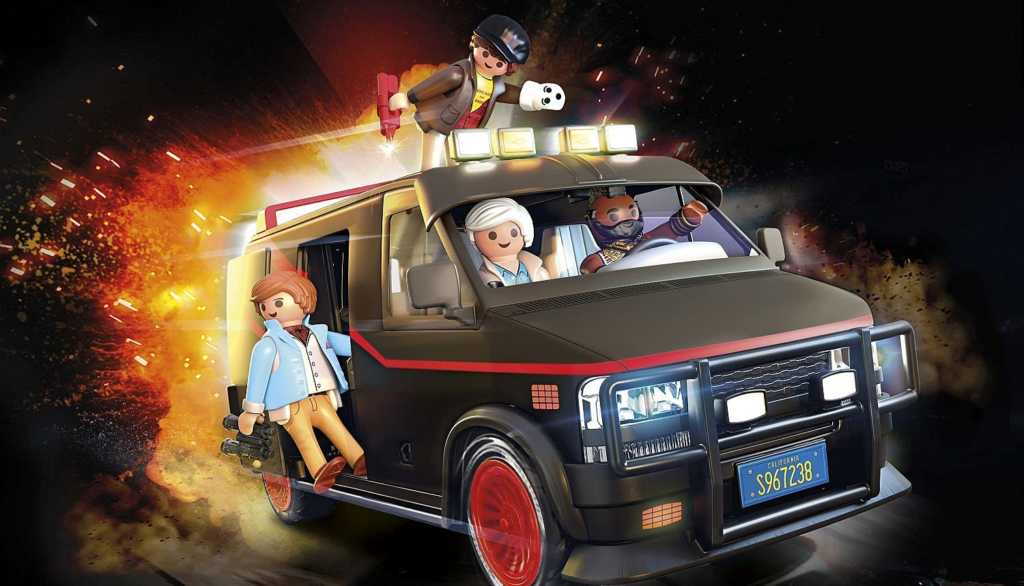 When picking out toys to play with, sometimes it’s the ones you don’t expect that really catch a kid’s eye. I should have known, because it’s a giant van with people you can play with, that it would be a big hit. But part of me thought maybe because it wasn’t super bright colors it would be rejected by my toddler.

An included booklet has character descriptions as well as instructions. That way even if you haven’t watched the classic 70s show “The A-Team,” you’ll still know who the characters are.

The set itself is very easy to put together. I haven’t opened all of the smaller pieces because I’m afraid they’d be lost to the abyss (set says ages 3 and up), but with only the people and car it still provides for hours of entertainment. You can play with this thing through different stages of you child’s development which is really cool. For toddlers, you pretty much just need the people and to attach the wheels to the van. Attaching the wheels is easy as can be. For elementary school ages, you can probably start opening the accessories and do some advanced play acting with it. Then when they’re ready to watch the show you can put it on and act out the story. And of course when they’re older they can put it on their collection shelf.

This set isn’t just for kids! You can keep it in the box, which is pretty cool to look at. Or you can set it on your own collector’s shelf. The nice thing about this is it literally has so many fun features. The top front opens so you can set a driver and passenger inside. The top back opens so you can play out them grabbing supplies. Back doors open and shut, which is pretty much what my kid loves to do over and over again. Even if a door pops off it’s easy to reattach.

You can pick one up yourself here. PLAYMOBIL has a ton of other show and movie-themed sets. These would be a great way to get kids started on a fandom that you love.