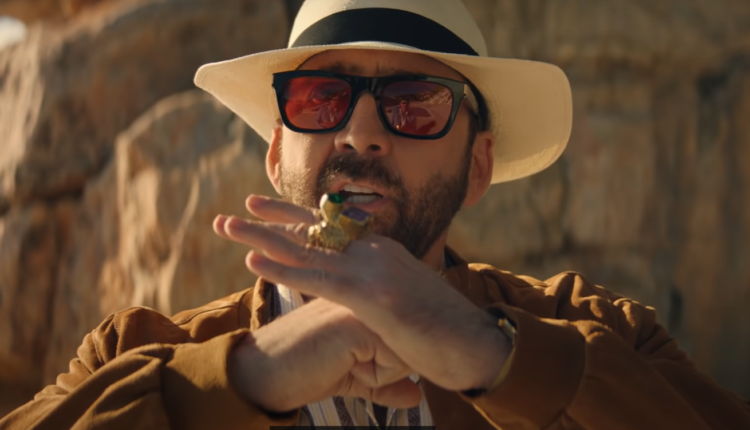 Full disclosure: this is going to be a shorter review than you’re normally accustomed to from me. Not because I don’t have a lot to say about “The Unbearable Weight of Massive Talent,” but rather most of what I have to say is high praise, and will get redundant. The main takeaway is that the film answers a question I have posed more times than I liked to admit: How much Cage could Nick Cage Cage if Nick Cage could Nick Cage? The answer? “The Unbearable Weight of Massive Talent.”

I always asked this question rhetorically, never expecting anyone to actually respond with a “hold my beer.” But that’s exactly what this film does. It takes everything you love and hate about the eccentric actor and frames in a way that you can’t help but absolutely love. It doesn’t get Cagier than this.

“Unbearable Weight” is downright hilarious, and I don’t mean that in any cliche way. I mean it is laugh out loud, gut busting, snort laughing funny. The film is able to tap into every single perception of Nicolas Cage, from the overacting to the very public debt to income ratio to the need to appear in literally everything that comes across his desk. The film is so self aware that it no longer becomes a parody of the actor being parodied, but rather an homage to a talented albeit divisive actor with a massive and divisive filmography. What do you with an Oscar award winning actor who has delivered some undeniably great performances but has also become a punchline of his own career? You make this film.

Written and directed by relative newcomer Tom Gormican (who was also a producer for “Movie 43,” but please don’t hold that against him…mistakes were made), the film features actor Nicolas Cage at a crossroads in his life. A man so obsessed with working and film that he neglects his own family, after losing a huge role he decides to quite acting for good. His agent has one last appearance for him, though. A big payday for minimal effort, Cage travels to a remote private Island to appear at a rich guy’s birthday party. That guy is Javi, a billionaire superfan of Cage who may also being a viscous drug lord under investigation by the CIA. What was suppose to be an easy, quick pop in, kiss babies and leave trip turns into a whirlwind of espionage, kidnapping, and gun fighting.

The film gives off strong “Tropic Thunder” and “Bowfinger” vibes, in that it feels like an industry inside joke that happens to be accessible to general audiences. But Cage once again delivers, tapping into every single facet of his capabilities and never once shying away from examining his own career and how the public perceives his filmography. Case in point: he’s fucking great here. Love him or hate him, Cage always gives 110% and refuses to phone it in even when the project doesn’t call for it. Cage truly gives everything he has to every single role he’s every played, and “Unbearable Weight” is no different even when it should and could be. You get all of Nicolas Cage playing Nick Cage, and by god does it work.

The real standout (outside of Cage Caging it up all over every single frame) is Pedro Pascal as Javi. This is hands down the most entertaining performance you’ve seen thus far, and I truly hope he continues to take on unabandoned roles like this one. He completely embodies a superfan, one who simply loves films and films that star Nick Cage, and gushes and trips over that obsession as he meets his film hero. There is also a genuine friendship that buds throughout the film, and Cage and Pascal are match made in heaven. I would watch an entire buddy cop series of those two, and I mean “Fast and Furious” length franchise entries. They shine here, and “Unbearable Weight” lets both of them run amok on screen and play to every single strength with both knew and didn’t know they both possessed. It’s wild to say, but Pascal may just being the stand out in a Nick Cage film featuring Nick Cage playing an exaggerated version of Nick Cage. He’s THAT good.

The long and short of it is no matter how you feel about Cage, “Unbearable Weight of Massive Talent” is worth every single second. Love Nick Cage? This one has Cage in spades. Hate Nick Cage? This one puts all of your misgivings about his work on display. On the fence about Pascal? This is as good as he’s ever been. Have you ever wondered what it would be like to watch Nick Cage on an acid trip while he tries to write a meta screenplay about the film he’s currently in but doesn’t know that he’s in because it’s another dimension wall break meta narrative?

I legitimately haven’t laughed this hard at a film in a very long time. “The Unbearable Weight of Massive Talent” is just a damn good time at the movies. It knows exactly what it is, what it wants to be, and what it wants to deliver. I can’t tell you how refreshing it is to watch a film that is so confident and self assured in what it wants to achieve and be. This is already a contender for one of the best films of the year, and I’m not trying to be cheeky, either. You’re going to be hard pressed to find a film more enjoyable and funny than “The Unbearable Weight of Massive Talent.” There is simply nothing like it, and I’d pit this against any other film that has done similar meta narrative comedy well.

I can’t stress this enough: Go see “The Unbearable Weight of Massive Talent.”

Direct quote, by the way. Also, everyone should watch “Paddington Bear 2.” Don’t ask me why, just….watch both films.

“The Unbearable Weight of Massive Talent” is in theaters April 22nd, 2022. You can watch the trailer below.