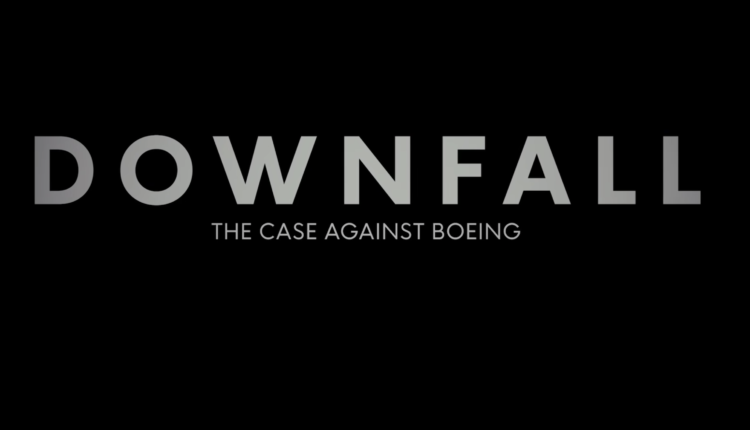 Speaking as someone who travels a good 60% of the year for work, there is nothing more terrifying than an expose on the dangers of flying. Logically, I know that there is always a danger when traveling no matter what the method is, but “Downfall: The Case Against Boeing” highlights intentionally dangerous business practices from the world’s leader in flight travel that claimed the lives of 346 people in less than 5 months. And, exposed an industry in ways I don’t think any of us were ready for. It is extremely important to examine, however.

The decisions and practices of Boeing that lead to these avoidable tragedies yet again demonstrate that corporate greed has dire consequences. “Downfall” expertly retells the story of the 737 Max tragedy and acts a cautionary tale of the dangers of American corporate culture.

I hate to have to do this, but we live in a world where the messenger and message are often indistinguishable in many eyes, so a disclaimer is required before we get too deep into the documentary. “Downfall” deals with a lot of political commentary as it seeks to dissect the events and decisions that lead to the two tragedies. These things require a certain willingness to critique the very fabric of our economic and political systems, and while some of my views may align with those of the filmmakers, I am going to say things that may not always reflect those personal views. This is merely a review and an analysis of the content that exists in the narrative presented. I know a knee jerk reaction is to find soundbites and out context sentences and run with it as the primary reflection of the whole piece, but I’m asking you to use a little discretion and make some common sense distinctions between the review and reviewer.

“Downfall: The Case Against Boeing” is directed by Rory Kennedy, and is notably produced by Brian Grazer and Ron Howard, among others. It tells the story of the Boeing 737 Max crashes that happened 5 months apart, killing 346 people, and grounding and entire fleet for two years in its wake. The documentary examines not only the tragedies and the loved ones left behind, but also the history of Boeing as the leader of the aerospace industry and corruption and culture that ultimately lead to a congressional investigation that found Boeing culpable and criminally responsible for the tragedies. It details almost every aspect of the case; from the tragedies themselves to the rise of Boeing to the ultimate fallout and damning documents that revealed their direct involvement and indifference for the sake of profit margins.

The documentary covers a vast amount of information, all of which is beyond damning to the Boeing reputation. Rather than recount things we may or may not already know, it’s best to discuss “Downfall” on the basis of whether or not it sets out to achieve what it’s trying to do. In that regard, it absolutely does. And that’s not even necessarily a good thing, as the documentary will leave you seething with anger and fear, all of which are targeted at a company that was (and still is) allowed to thrive in our current culture. In addition to expertly crafting sympathy for the loved ones of the victims, “Downfall” also delivers some harsh truths. The biggest of which is this: Capitalism breed innovation until it no longer needs to.

The film truly exposes a changing culture of profit over safety, and the hundreds of thousands documents released to Congress from Boeing (after almost a year of demanding them) demonstrate outright negligence on the part of executives, with every single decision made driven by profit above everything. It is sickening to watch in the face of the enormous tragedies, and the indifference of the FAA armed with regulatory power refusing to intervene despite knowledge of the MCAS system failure only fuels that fire. Everything from the design of the aircraft to the purposeful cover up of system failures to the consistent initiative to hide the system from its pilots seeks to paint a picture of the dangers of our systemic culture. The power of Wall Street and big business that operate without impunity is inherently dangerous, and directly led to the deaths of 346 passengers.

There is just so much to be angry about in “Downfall,” including the outright racist campaigns from Boeing in the immediate aftermath that put the blame directly on the pilots solely on the basis that they weren’t white, American pilots. They did all of this knowing full well the plane itself should not have been in the air in the first place and that the pilot didn’t matter in terms of being able to correct the situation. It is infuriating, and doesn’t have a happy ending. I’m sure you all know by now, but Boeing is still very much in operation and even worse, the 737 Max is in the air. Business as usual because business is all that matters. In our effort to continually preserve the fallacy of the American dream, we have created a culture that bears no responsibility or concern for lives lost in pursuit of that dream.

It’s a lot to take in, but “Downfall” handles all of it really well. It may be hard to watch, and it’ll instill the fear of God when it comes to flying, but the documentary is very focused in what it wants to convey. It delivers an important investigation into tragic events that, while probably won’t happen again in this specific instance, is a product of a culture that fosters and protects these kinds of tragedies if the bottom line remains high. Stock buy backs and dividends rule the skies, not the safe travels of humanity. The film also asks you to call into question every comforting statement these country rulers make. Namely, we’re customer focused, safety is our number one priority, we strive for excellence etc. The real conclusion the documentary makes is that if it’s big business, you’re probably right not to trust anything they tell you.

“Downfall” is a fascinating and terrifying documentary, one that is self assured and confident in its conclusion from a clearly well researched investigation. The pieces it puts together tell a terrifying tell of greed and negligence, and outside of asking you to be a bit more critical and cautious, never seeks to provide answers to a much larger problem in our economic system. You will absolutely learn a lot, but it’s probably not something you should watch before bed. Or before a flight. Or when you’re not in a completely safe space and feel any sense of vulnerability. It is a difficult but necessary examination into tragedy and culture, and should light a fire in viewers to begin questioning things we’ve been told to not worry about.

You should definitely worry about them. “Downfall” makes it very clear: big business does not have your best interest at heart, and you should be wary of any company that tries to tell you otherwise. Even one like Boeing, who spent decades gaining public trust only to smash it into bits for bigger bonuses.

Not so friendly skies, indeed.

“Downfall: The Case Against Boeing” is currently streaming on Netflix. You can watch the trailer below.