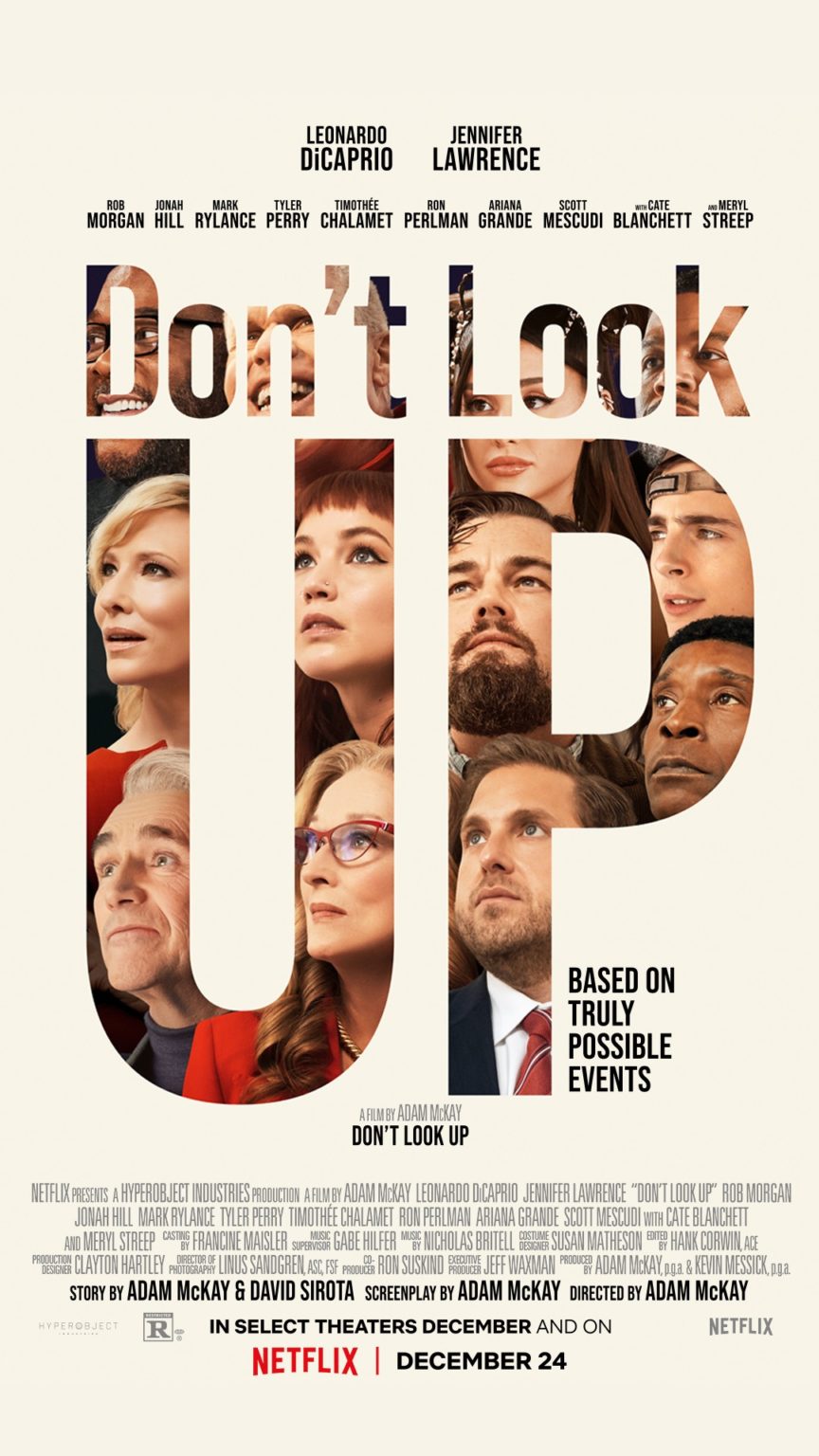 One of the great things about the streaming services these days is that every so often I’ll come across something that I haven’t heard anything about, and the newly released Netflix disaster-thriller-dark satirical comedy, “Don’t Look Up,” is one of those gems. Starring Leonardo DiCaprio and Jennifer Lawrence, it’s a fabulous introspective spin on just how messed up the world, and in particular, America, has become.

Lawrence plays astronomer PhD candidate Kate Dibiasky, and DiCaprio is her professor, Dr. Randall Mindy. While taking observations, Dibiasky discovers a new comet, and as she and Mindy run the orbital calculations they discover it’s squarely on a collision course with earth. Sure, we’ve had no end of films like this over the years – “Deep Impact” and “Armageddon” come quickly to mind. But where this one finds it’s angle, is in the fact that most of the government is far more concerned with the upcoming elections than a planet killing comet is on it’s way in just over six months.

Pre-production of the film started before Covid hit, however most of the finalization of the casting and the script was completed in the latter half of 2020, giving additional relevancy to the less than subtile political challenges that keep delaying the country from taking action against the looming menace (except here with a comet as the metaphor for COVID). Writer/director Adam McKay (“Anchorman: The Legend of Ron Burgundy“) straddles a very fine line between straight up comedy, and the kinds of antics by the fictional governmental administration that we not only could readily imagine coming out of a recent real-life White House occupant, but that had echos of actual happenings.

The film works on a few levels, because they never actually have anyone doing anything so nuts that we couldn’t see it happening in reality. Had you played this same film before the 2016 election, it would have read very differently. Now what you wind up feeling is a sense of anguish and loss as the meteor barrels ever closer, and the main thought that comes up – is if humanity (and earth) is really worth saving at all.

Now a lot of individuals who watch it will actually miss the underlying themes, even though they’re about as subtile as a sledgehammer. The title itself comes from the fact that while the comet is getting closer, and scientists all around the world have been explaining the data ad-nauseam, a large segment of the population doesn’t believe that the comet exists. Eventually of course it becomes visible to the naked eye, and initially the hashtag of #justlookup starts trending, only to find counter-messaging from the deniers who stand by a dictum of #dontlookup. Is an interesting effect because there’s tension not only from the potential of impending doom for the planet, but also, the audience feels some tension because as noted earlier, it’s hard to admit that maybe a reset on the planet isn’t the worst thing that could happen.

Lawrence and DiCaprio deliver great performances, as does Meryl Streep as President Orlean (who does a solid job in her character’s own narcissistic interests). Jonah Hill plays Jason Orlean, the President’s son and Chief of Staff. His contributions are the only ones that read as if they’re stepping across the line into parody. Hill can act, but here he winds up trying to be the one that goes a bit too far overboard.

In the end, it’s a long film, clocking in at 2 hours and 18 minutes, but it doesn’t really drag, either. Rated R for language and nudity. It can be enjoyed on couches everywhere by way of Netflix.