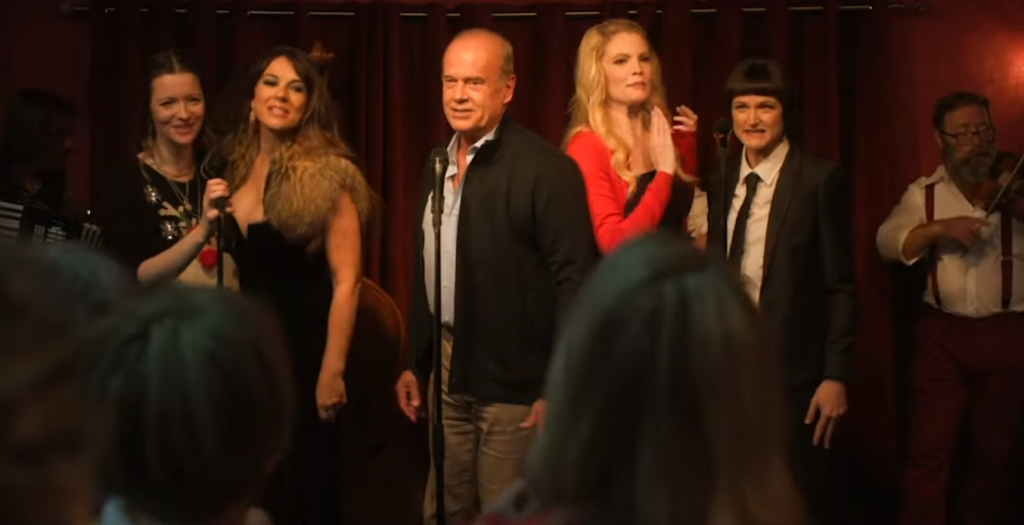 Halloween is over and November has begun. So naturally, the time of year has come again for us to start to usher in the kind of spirit that we inescapably know as “Frasier.” Oh, sorry, I mean the holiday season. But what if we told you that you could celebrate “Frasier” and Christmas, together? Well, in a way you can thanks to the new upcoming Netflix film, “Father Christmas is Back” starring the one and only, Kelsey Grammer. Oh, and Elizabeth Hurley and John Cleese are there too amongst others but, let’s face it, we all know why we’re here.

Frequent visitors to Nerdbot may already know that we have a strong affection for the 1993 sitcom “Frasier” where Kelsey played the titular character after the wrap-up of “Cheers.” We’ve also reported on Grammer’s film career, reviewing everything from “Down Periscope,” to one of his latest films, “The Space Between.” So combine Christmas with Kelsey Grammer, and clearly we’re intrigued, even if the premise of the film seems a bit forced and derivative.

Actress Nathalie Cox plays one of the four Christmas sisters who wants to have a perfect Christmas party at her house for her family and sisters. Hurley plays one of the other three, and if the trailer is anything to go by, it looks like they may not get along incredibly well. To make things even more awkward, their father, played by Kelsey Grammer, left them on Christmas years ago. But now, on this particular Christmas Eve, he suddenly returns with a new girlfriend. Shenanigans ensue. Also that’s the set-up for the extremely on-the-nose pun about how the family’s last name is Christmas, so Kelsey is literally FATHER CHRISTMAS. Get it?! FATHER CHRISTMAS, and now he’s BACK?!

The movie is co-directed by Mick Davis and Philippe Martinez, form a story created by Martinez. In case you thought the quality of the film didn’t bode well based on the titular pun, it doesn’t get much better when you go through the filmography of Martinez and see movies like “General Commander” with Steven Seagal and “Viktor” with Gérard Depardieu and Hurley. The latter of these currently has a rating of 1.6 out of 10 on Rotten Tomatoes. Now granted, past failure is not necessarily indicative of future results, but that’s not exactly the kind of track record that’s gong to make you rush to Netflix when the film premieres on November 7th.

At the very least, Kelsey Grammer always gives everything he has to his roles; the man has a strong work ethic. That being said, we’ve mentioned previously his tendency to wind up in some pretty rough films. Will this break the trend and become a new holiday classic? We’ll have to see. In the meantime, here’s a Christmas gift for you in the form of a piece of trivia; this is not the first time John Cleese and Kelsey Grammer have worked together. Cleese was a guest star on an episode of “Cheers” playing a colleague of Frasier’s, Dr. Simon Finch-Royce. He won an Emmy for that part; something tells me he won’t be taking home an Oscar here.

“Father Christmas Is Back” hits Netflix on November 7th, 2021.