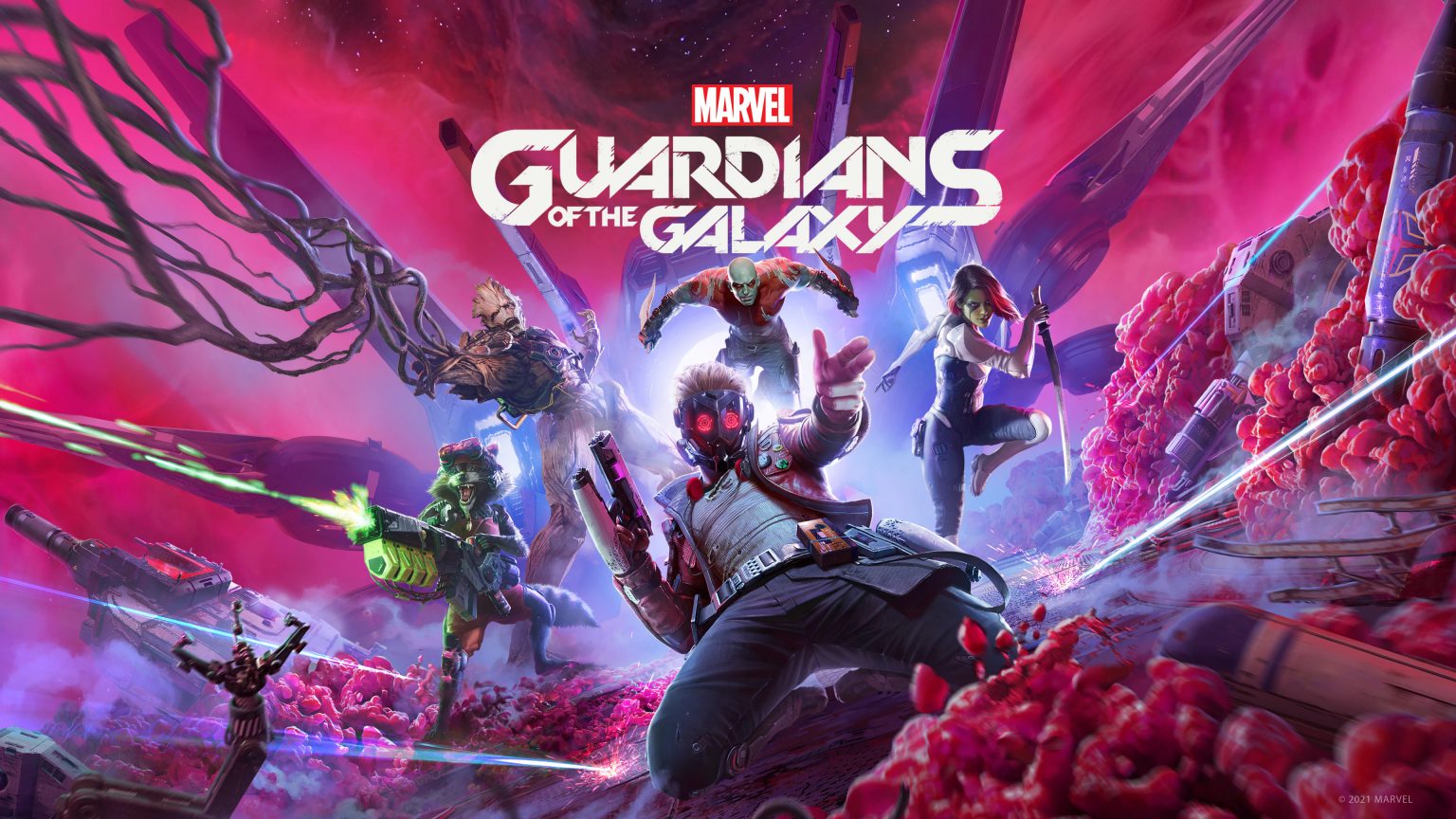 It’s not easy being a Guardian of the Galaxy. First, you’ve got the entire galaxy to guard. One that’s filled with space pirates, giant alien beasts and rampaging Chitauri in the echoes of an intergalactic war. You’ve got prisons to escape from, meddling Nova Corps to dodge, and all the while the space llamas are chewing on your communicator relays.

When Star-Lord, Rocket, Groot, Drax and Gamora are once more thrust into adventure through space, the Guardians must band together to face a new threat, pay a mighty big debt, and learn to live with one another as they go. In “Marvel’s Guardians of the Galaxy” it’s time to jump into the saddle as Star-Lord and take on the universe.

Something of a cross between action mainstays like “Mass Effect 2” and 2018’s “God of War,” “Marvel’s Guardians of the Galaxy” takes almost all the wonky movement controls and clunky projectile aiming from “Marvel’s Avengers” and promptly tosses them out the window. This is a game, while sharing the stunning visuals and overall production value of the former, that has been redesigned completely for playability. Most importantly, “Marvel’s Guardians of the Galaxy” is a tight, linear single player experience from start to finish. There is a cinematic story here, one to be enjoyed like its massive movie counterparts, and it is a drastic distance from the multiplayer slog of its predecessor. It’s a combat heavy adventure, mixed with explorable worlds, decision-based dialogue exchanges and even a little light RPG-like ability advancing.

Combat is complex and fast paced, and while seemingly complicated, is fairly quick to get a grasp on and control with precision. While physically controlling Star-Lord moving around the battlefield and firing off his twin pistols, you simultaneously control the targets and special moves of your four Guardian allies. Yes, you are essentially controlling five characters at once, but it’s easier than it sounds. Each character has different moves attached to their own cooldowns, so managing when and upon whom your allies use their abilities allows you to control large hordes of enemies with style. Rocket hits areas with large AOE attacks, Groot can ensnare targets with vines, and Gamora can be directed to focus on a single target for huge damage. It starts simply with one ability a character to get used to, but each character gains more as you grow in power throughout the game, and combat becomes increasingly tactical and varied the more abilities you get. Combat can definitely get cluttered at times, there is a lot going on simultaneously, but I never found it to be altogether too much. That being said, if you’re the type who likes to take their time and aim up in a game like this, you’re going to get slapped around a lot. This is a game of near constant movement when in combat, dodging a relentless enemy assault.

The rest of the team automatically go about their own brand of havoc when you aren’t directly ordering them around, with Rocket occasionally leaping onto Groot’s shoulders to spray down fire on opponents and Gamora leaping in to dynamically slice through an enemy you may have just sent flying with a kick. It all feels very fast paced and kinetic and is honestly a lot of fun to play.

Star-Lord himself feels a little useless at the beginning of the game, with little more than the ability to hover on his jet boots and pluck away with his pistols. While they feel a bit pea-shooterish at first, the trademark twin pistols quickly gain in fun and versatility when you start seeing the four elemental settings come into play, giving you the ability to freeze enemies in ice or zap them with electricity, and then branching into an upgrade tree increasing Star-Lord’s effectiveness in various aspects of combat. Upgrades are paid for by a mix of materials found liberally littered in hidden places around the game’s levels, and by leveling up with experience gained from just how swiftly and stylishly you disposed of your foes.

Combat being a lot of fun is a huge aspect of any action game, but probably more importantly to a story driven single player experience of this kind, the characters are really there. This is a personality driven story, and every Guardian is represented fully and regularly. Like the source material, this is a team story and everyone is present and plays a major part in dialogue, emotional drive, and story. Rocket exchanges barbs with Quill as you wander around looking for secrets, Drax misses the subtext of every conversation, and Groot somehow manages to get those well timed lines in so that you can almost guess what he’s saying.

In between battles, you’ll also find hidden items in the darkest corners of the levels that will then be added to the hub area, the hunk-of-junk spaceship Milano, where you can interact with them to prompt conversations with your crew about their past, their adventures and their secrets. There’s a lot to be enjoyed here, hearing Drax reminisce about his wife, Rocket describing the horrors of his birth on Half-World, and a whole lot more. The character heavy concept is bolstered by some sturdy voice acting, with everyone somehow sounding not-necessarily like an impression of their movie star equivalent, but identifiably like the characters we know nonetheless. While each character has a brand new costume design all their own by default, each Guardian has a number of additional costumes to unlock by finding craftily hidden crates throughout the game, further rewarding exploration and giving something for completionists to go back for.

While not exactly the MCU incarnation of the spacefaring team, they are indeed pretty close. Just like “Marvel’s Avengers” was a near thing as far as movie equivalents are concerned, these Guardians are clearly heavily inspired by their MCU counterparts, but just distinct enough to be their own thing. Quill himself isn’t quite as goofy or childish as Chris Pratt’s performance of the character, and like in the comics his father is J’son, as opposed to Ego like in the movie timeline. For those true continuity nuts amongst you, the story doesn’t exactly fit in the comic canon precisely, but can be safely slotted somewhere in the post-Annihilation Conquest era Guardians status quo.

While film fans will definitely find the characters they’ve come to love on the big screen, there is also a lot here for more old-school Guardians fans too. There’s plenty of references to the excellent Abnett/Lanning era of “Guardians of the Galaxy,” and plenty of cameos from familiar faces showing up to ruin our heroes day in some way or another.

Of course, anything featuring the Guardians of the Galaxy just isn’t complete without an absolutely stellar soundtrack, and “Marvel’s Guardians of the Galaxy” does not disappoint. With an on-ship music player filled with 80’s classics (and an album of original metal ballads by in-universe band Star-Lord), you’ll hear the familiar sounds of Gary Numan, Billy Idol, Blondie, Blue Oyster Cult, and many others. Music even features into the combat system itself, with the team huddle attack bringing everyone in for an impromptu pep talk, granting everyone a battle buff and blaring out a tune from Star-Lord’s tape player over the ongoing battle. It captures the joy and energy of the film’s love for music, and it is good stuff.

Video game adaptations of cinema do not have a good reputation. There are diamonds in the rough, but they are often forgotten in the general rush to assume any such adaptation is going to be bad. “Marvel’s Avengers” had a great Ms. Marvel game buried in it, crushed into a corner by the awkward and frankly dull multiplayer center. “Marvel’s Guardians of the Galaxy” really makes me wish we had got that fully fleshed out single player game from that too, as there’s so much fun to be found here. It’s got the off-beat comedy and the surprising heart that the team is so well known for, the interplay between our five heroes and a budget well used on glorious graphics and a blistering soundtrack. I’m as surprised as anyone that “Marvel’s Guardians of the Galaxy” is as good as it is, and I’d go so far as to say that with the notable exception of a certain web-slingers adventures, it may be the best video game outing we’ve had about a Marvel property in a very long time.

“Marvel’s Guardians of the Galaxy” is available on PS4, PS5, Xbox One, Xbox Series X, Nintendo Switch and PC now. My experience was with a PS5 console.