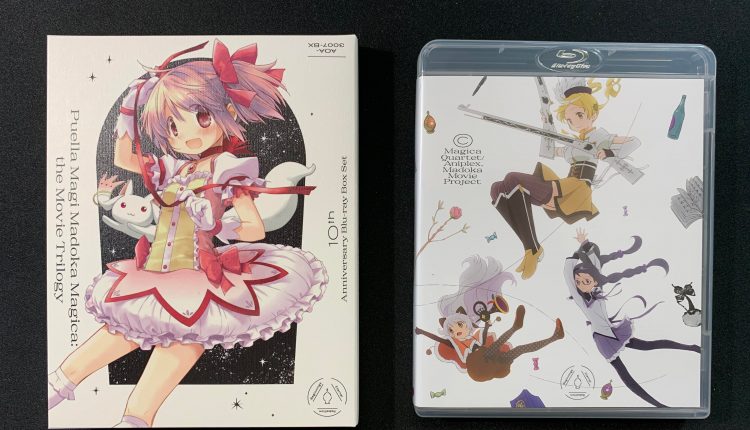 That’s right, It’s been 10 whole years since the debut of the groundbreaking anime series “Madoka Magica!” Feel old yet? We sure do.

“Madoka Magica” was one of the first of its kind. A dark, psychological take on the magical girl trope, full of death, despair, and pretty colors. The series ran for 12 episodes in 2011 and received 2 movie adaptations in 2012 and a movie continuation in 2013. These releases were originally licensed in the US by Aniplex of America, but they have been out of print for quite some time.

Until now… To celebrate the 10 year anniversary of the series, Aniplex and Right Stuf have paired up to release a bundle blu ray set of all 3 movies, together for the first time ever!

Of course, as soon as we heard about this new set, we had to get our hands on one! And our copy came a whole 4 days early (thanks Right Stuf!)!

At first glance, the slip cover does look a little cheap, but the art is beautiful throughout the set. All 3 movies get their own disc and there are a decent amount of special features including TV spots and trailers.

The first two movies, Beginnings and Eternal, serve as a recap of the series, with some additional scenes and updated animation, while the third movie, Rebellion, is a direct continuation of the series.

These movies sparkle in HD and they each have a fantastic English dub, as well as the original Japanese track. This set is a must have for any “Madoka Magica” fan!

Pick yours up here while you still can!

Champion Athleticwear Teams Up With “Naruto”