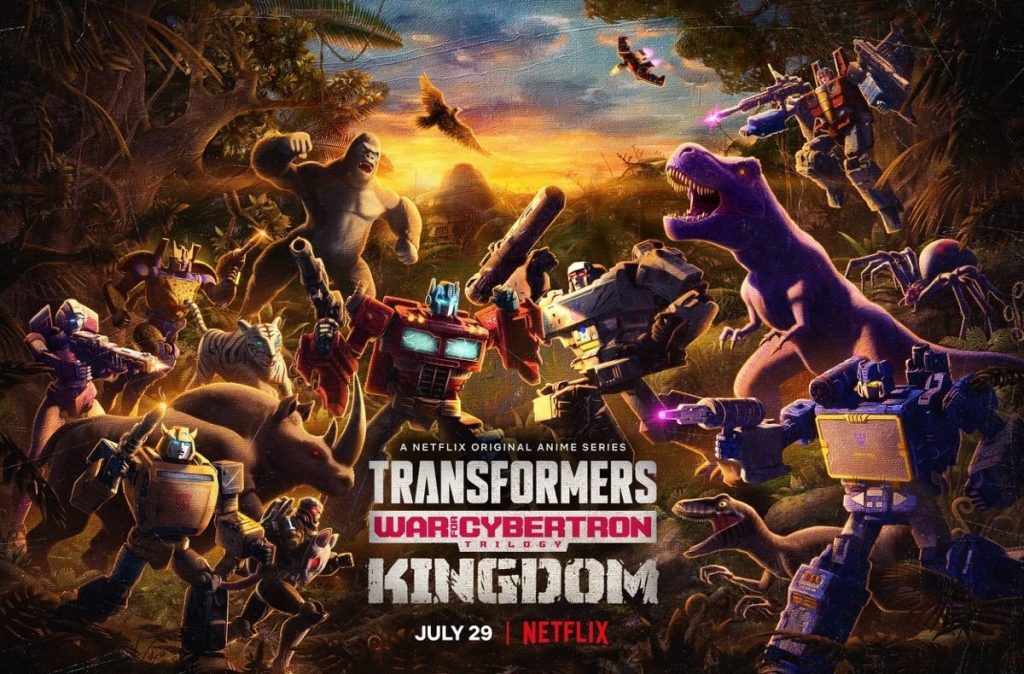 As Netflix continues their iron grip on streaming, there is a tendency to try to do too much all at once. While their track record has been more hits than misses, it goes without saying that Netflix originals, particularly when dealing with the capitalization of 80s and 90s nostalgia, tends to be at best, polarizing. Luckily, “Transformers War for Cybertron: Kingdom” is another stellar entry into a well balanced trilogy series, packed with the right amount of nostalgia and complex story telling for the kids inside adults trying to relive their childhood and dazzling new ideas to capture the imagination of actual children. It’s not only difficult to do this once, but to do it 3 times in a row and end strong, “Kingdom” does just about everything right and achieves everything it set out to do.

“Kingdom” follows the events of the previous series that are separated into three parts. “Siege” and “Earthrise” are crucial pieces to watch in order to fully appreciate the conclusion of “Kingdom.” I made the mistake of not realizing how intricately tied the three series actually were, and essentially watched “Return of the King” without watching “Fellowship” and “Two Towers.” I had to go back watch the previous series, which is a compliment to the strength of “War For Cybertron’s” conclusion. It’s not too hard to follow even if it’s the only part you watch, but you can definitely tell there are some major plot points and events that our characters are still affected by that enhance the viewing experience if you start from the real beginning. The story left me so invested I had to backtrack to make sure I got the full picture. “Kingdom” pulls from Beastwars, including both Maximals and Predacons as both the Autobots and Decepticons are marooned on a seemingly lifeless planet in search of the allspark to restore Cybertron.

The 6 episode series is packed with betrayal, time travel, dopplegangers, future selves vs present selves and much, much more. It’s actually really impressive that a story that centers around transforming cars, mammals, and yes, dinosaurs who are chasing macguffins like The Matrix of Leadership and The Allspark still manages to not be as silly as it should be. There is a part of you that wants to roll your eyes at how dumb it sounds on paper, but “Kingdom” uses the elements in a way the feels important and earnest, clearly created and written by people who care for the source material and the transformers themselves. “Kingdom” is such a complex, sprawling narrative that includes both death, loss, and self identity it’s hard to believe that it is actually for children. I mean look, deep down we all know it’s not, but “Kingdom” rides that line between silly and purposeful really well, allowing it to be accessible to just about anyone that enjoys Transformers regardless of age.

Story and Screenplay writers F. J Santos and George Kristic (who also worked on “Star Wars: The Clone Wars” which makes a lot of sense when you hear it) bring out the best the Transformers have to offer, blending sleek, vibrant animation with surprisingly deep and intricate storytelling.

While having the original voice cast of the Transformers Franchise would’ve been a wonderful cherry on top, everyone in “Kingdom” does well enough to make this slight forgivable.

Add to that a compelling story and gorgeous animation, and “Kingdom” is a fitting conclusion to a strong trilogy, capturing the magic of Transformers while still finding new and unique ways to further the world and story. Admittedly it was low on my list of things to watch, and I ended up watching the entire trilogy, with the story and artwork sucking me in and keeping me interested from start to finish.

If you’ve been on the fence about starting “Transformers War for Cybertron” or if you found yourself triggered or put off by the subversion tactics of “Masters of the Universe Revelation,” (review here) I would highly recommend giving the series a watch. The episodes are short (23-25 minutes) and pacing whisks across the galaxy and through time and space at a rapid but balanced pace.

“Transformers War for Cybertron” is good fun for the whole family, young and old. So get everyone together and yes, Autobots: ROLL OUT!