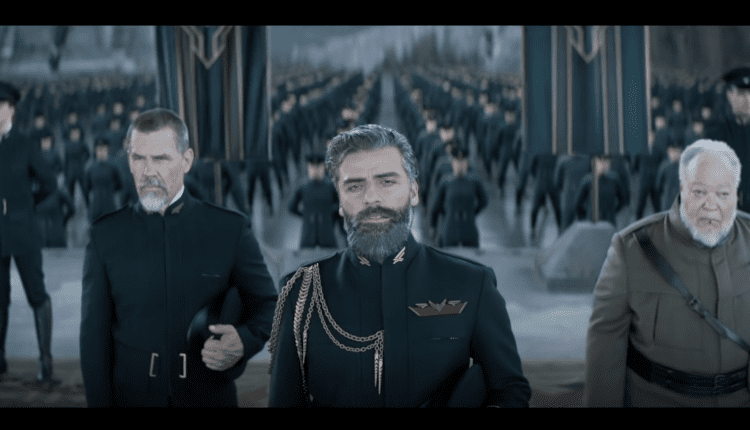 I’m gonna dive right in to the new “Dune” trailer that hit this morning, because WHY THE HELL NOT. After delays, release confusion, and what seems like a never ending level of frustration, we’re getting ever closer to the actual bowing of the ultimate coming of age story. Frank Herbert‘s seminal work “Dune” was first published in 1965, and has endured as a major touchstone of the science fiction genre. Rich in lore and world creating, the saga of politics, humanity, and adventure seems to reach every single generation.

There was of course David Lynch‘s seminal film version of the tale in 1984, as well as SYFY’s (back when it was SCI FI CHANNEL) two-installment mini series from 2000 which covered the first two novels. But this new take, from visionary filmmaker Denis Villeneuve, is aiming to be the ultimate adaptation.

With some absolutely PERFECT visuals unveiled in this morning’s cinematic trailer (see here), we feel safe in Villeneuve’s hands. BUT- there are some changes we can spot right away. Will they hinder or propel “Dune” for true Fedaykin? That remains to be seen.

Let’s take a look at what was new in this morning’s trailer. Moments straight outta Arrakis, Caladan, Geidi Prime, and our deepest desert dreams.

Guild Heighliners, Sardukar, a delegation from the Paddishaw Emperor Shaddam IV of House Corrino, Chani the freedom fighter, House Harkonnen ‘blessing’ their troops, Piter and The Baron, Jamis [I am a friend of Jamis!], ornothopters over the Arrakis capitol city of Arakeen, Dr. Yueh, the Fedyakin warriors meeting the Harkonnens in battle, Lady Jessica becomes the Sayyadina, and so much more.

Who Is The World Leader In Artificial Intelligence?