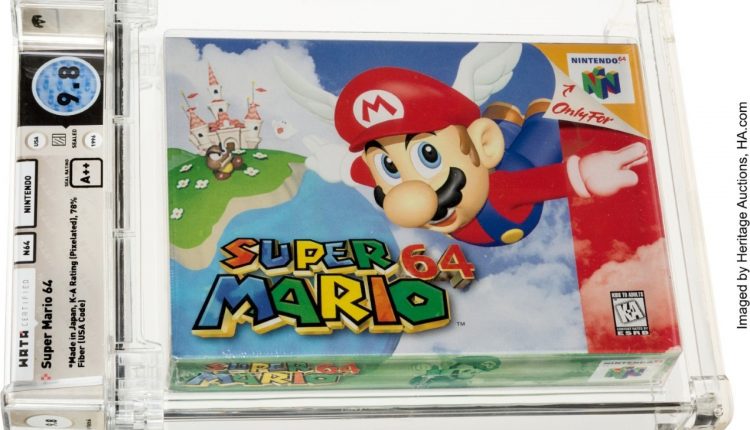 Near-Perfect Sealed Copy of “Super Mario 64” Sells for Over $1.5 Million

It’s one of the most influential games of all time, as well as one of the most beloved. “Super Mario 64“ hasn’t aged well in some aspects; with its rough polygonal graphics and frustrating camera controls, some of the gaming elements it pioneered have been refined and executed far better in the games that would follow it. That being said, it’s still Mario. Perhaps that’s why a sealed, pristine copy of “Super Mario 64″ just sold at auction for $1,560,000 from Heritage Auctions.

Yup, that’s right0- over $1.5 million for a boxed, sealed, very well kept copy of Mario’s 1996 debut on the Nintendo 64. If this story sounds familiar, then you may be thinking of the recent auction, where a copy of “The Legend of Zelda” was listed at $87,000. That cartridge finally ended up going for ten times that amount at $870,000 on July 9th.

Here we are two days later, and that record has already been crushed.

This particular boxed copy of “Super Mario 64″ seems notable for its rare quality, and that it’s not one of the million-seller “Player’s Choice” reprints. Several of the more popular N64 games received a reprint with a gold flavor text on the box, indicating that the game had sold over a million copies prior to to the reprint run. Sony did a similar thing with PlayStation games, that were reprinted with a green ‘Greatest Hits’ label. The details on this auction don’t say anything about that. They just show a picture of the box which is clearly not a ‘Player’s Choice’ version, and how it’s a sealed copy rated at a 9.8 on the widely used WATA scale.

Nintendo 64 games tend to be hard to find in box. Unlike CD based games that came in jewel cases, N64 cartridges came in bulky boxes, many of which were discarded. Go to any used game store and see how many loose cartridges you’ll see as opposed to any boxed N64 games. Combine this with Mario’s name, nostalgia, and a renewed interest in game collecting thanks to the COVID-19 pandemic, and you can start to see where “Super Mario 64″ might command a high price.

Still- $1,560,000 is a LOT of money. It would be interesting to see how much it would’ve fared prior to the pandemic and the gaming resurgence. Sealed copies of older games are getting harder and harder to find though; so this likely won’t be the last time we see an auction sale like this. In the meantime though, we tip our wing caps to you Mario, even 25 years after your first 3D outing, you’re still making a name for yourself.

Mary Anne Butler May 26, 2022
We are so very sorry to report the passing of actor Ray Liotta. Reports indicate the "Goodfellas" star passed in…
Nerd Culture