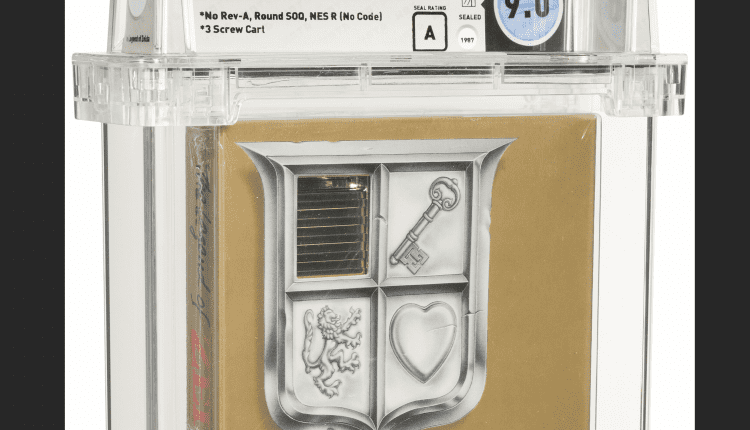 We’re no strangers to the fast paced world of collecting. Sealing, slabbing, and rating of comics and other collectibles is something we love to cover, especially when it’s something rare like a 9.0 Action Comics #1. But sometimes, an item crosses our desk that we’re left scratching our heads about. Like this sealed and rated 9.0 NES Legend of Zelda cartridge Heritage Auctions has.

Bidding is still going, so we expect the $87,500 number to continue to go up.

A True Grail Among Games

The Legend of Zelda – Wata 9.0 A Sealed [No Rev-A, Round SOQ, Early Production], NES Nintendo 1987 USA. Truly, the term “grail” only begins to scratch the surface of describing this game. Of all of the games we’ve offered in our auctions, this sealed, early production copy of the first game in the groundbreaking Legend of Zelda series is no doubt the apotheosis of rarity, cultural significance, and collection centerpieces. A proverbial trifecta of collector perfection that only one will receive the honor of calling their own.

While it is a hard truth, it is a truth nonetheless — none of the copies we’ve offered of this title previously could even attempt to hold a candle to this one due to its incredibly rare variant that holds early production status. This matter is completely inarguable. This is the only copy from one of the earliest production runs that we’ve ever had the opportunity to offer, and, possibly will have the opportunity to offer, for many years to come. Considering this variant was only produced for a few months in late 1987 before it was ultimately replaced by the “Rev-A” variant in early 1988, this statement likely comes as no surprise to collectors. Only one other variant precedes the offered “NES R” variant and that is the “NES TM” variant, which is the true first production run. However, it is also widely believed that only a single sealed “NES TM” example exists, and there is no telling whether or not that copy will ever come to market. Essentially, this copy is the earliest sealed copy one could realistically hope to obtain.

As for the game itself, what explanation is even needed? Few franchises in the realm of video games could match the significance of Nintendo’s Legend of Zelda franchise. It successfully encapsulates everything there is to love about video games: solving puzzles, world exploration, immersive storytelling, and incredible character design just to name a few. There’s certainly no wonder as to why Link is considered to be one of Nintendo’s primary company mascots!

As for this particular copy of the world’s first adventure with Link, we don’t even need an entire hand to count the number of copies that are purported to exist in sealed condition from this “No Rev-A” production run, and this copy is among the finest known of these examples. Until now, there has never been a single public opportunity to lay claim to this spectacular collection centerpiece (or one even close to matching its allure and significance).

You can bid on the item (or just keep an eye on how much someone is willing to pay for this) on Heritage’s website here.

Semi-Obscene Corn on the Cob Butter Aid Is Super Weird

Diamond Found in Botswana May be World’s 3rd Largest