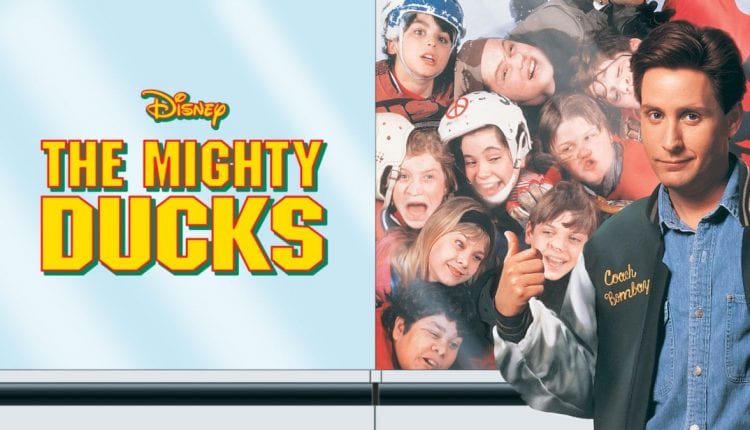 Ok, before anyone gets bent out of a shape, “The Mighty Ducks” does not hold a 10% or Less rating on Rotten Tomatoes. It does, however, have a score far lower than what you would expect, and is probably more shocking that some of the films that end up on the worst of the worst list.

There are actually a lot of beloved classics who’s cultural impact don’t correlate at all with their Rotten Tomatoes score, and to give myself a break from the depth of despair filmmaking, I’ve decided to examine films that may not make the worst list, but come surprisingly close enough it’s worth revisiting. “The Mighty Ducks” is an undeniable powerhouse in the cultural zeitgeist, a film that spawned much more than a franchise and has entered countless phrases, quotes, and personalities into the timeless cultural lexicon. Even if you have never seen the original, you know almost everything about it and have probably inadvertently followed many of the careers the film helped set in motion. So, here we will examine why “The Mighty Ducks” has stood the test of time, why the critics have rated it so low, and whether or not it deserves its very low rating.

“The Mighty Ducks” is a 1992 Disney underdog sports story that follows a group of young ragtag peewee hockey players who are assigned a reluctant coach on probation and are transformed into a championship level team. They fight, they lose, they win, and of course, they learn the power of friendship and what matters in life by becoming a team. It’s about as predictable of a sports coming of age story as you can get, rarely deviating from the tried and true formula and checking all the boxes of its genre. You would be forgiven if you watched it and dismissed it as just another film on the shelf in a long line of underdog stories.

But this one transcended these confines by leaps and bounds above its peers. For starters, theres no Bad News Bears professional baseball team despite both movies being somewhat indistinguishable on paper. There’s not real Average Joes Dodgeball team, no “Rudy” themed NFL team, no successful “The Replacements” franchise or successful prison team based on “The Longest Yard.”

There IS however, a very really hockey team named after this Disney film- the Anaheim Ducks. This is an unprecedented achievement by a film; to create a fictional underdog children’s team and create an actual, competitive professional team after it. That is an undeniable mark on the decades since the films inception, a level global acceptance that almost no sports genre film has achieved.

What sets “The Mighty Ducks” apart isn’t its originality so much as how it managed to capture the magic at the right time. In all fairness, there is nothing necessarily unique about the film. It is completely formulaic and rarely veers off the beaten path of underdog sports storylines. The thing that really separates “The Mighty Ducks” from many of its peers is that it does all of these formulaic things WELL.

It has a collection of well portrayed kids with vastly different personalities (despite all of them being one note), and Emilio Estevez as Gordon Bombay, a love to hate, hate to love narcissistic lawyer turned miracle worker hockey coach. Paired with a tight, funny and heartfelt script, “The Mighty Ducks” is hard not to enjoy even if it’s highly implausible and somewhat ridiculous. If we’re really looking at it, The Ducks don’t really even really do much in their ascension to champions. They basically win one game, the Huskies forfeit due to illness, win another one and bam! They’re peewee state champion competitors that beat the far superior Hawks.

it’s all kind of silly when you really thing about it, but the film is good enough to where those things don’t really matter. “The Mighty Ducks” strikes a chord with viewers for decades because it embraces every aspect of its genre and executes on a fun, exciting level that few films like it really achieve in the same way. The jokes and memorable moments stand out even if the film as a whole doesn’t, with each character given some kind of quotable line or banter that you’ve always remembered. Things like Quack, “I am Goldberg…The goalie!” “Soft Hands” “Ducks fly together” “Flying V” and “Cake eater” are all excerpts from the film that you remember clearly even if you don’t remember the movie as a whole. Most films in this genre simply don’t have these kinds of memorable moments despite their best efforts, and these moments have lasted for almost 30 years. Not only that, but the moments were so iconic that they spawned two sequels, an actual NHL Hockey team, an animated series, and of course “The Game Changers” on Disney+, “The Mighty Ducks” for the new generation that absolutely understands the magic of the original.

So why the hell does such a culturally impactful film have a 21% on Rotten Tomatoes? To be honest, I’m not entirely sure. it’s one thing to simply not care for the genre, but it’s another to tank the rating of a beloved classic down to being on the cusp of bad films. The 20% range has very few films with the cultural impact of “The Mighty Ducks,” and only a few have the nostalgia argument afforded to them. Most critics highlight the films flimsy and formulaic plot, essentially marking it down for lacking originality and feeling too much like every other children’s sports films. While yes, this is true, I would argue that this is actually the film’s strength, not a weakness. See, the challenge isn’t necessarily making a film that sticks to a certain genre or formula; this happens all the time and we wouldn’t have film categories if they didn’t. The challenge is making a film that does all of these things WELL. Anyone can make a romcom. Hell, Hallmark Channel makes the same romcom over and over and over again without any variance whatsoever. But making something like “Sleepless in Seattle” or “When Harry Met Sally?” Ones that standout above rest even if they operate within every single limit of the genre? That’s MUCH harder, and I believe that “The Mighty Ducks” captures the magic of underdogs without needing to venture too far out to do so.

The kids are funny and memorable, the story is simple and predictable but compelling, the victory feels earned, and yes, Gordon Bombay’s wit and character arc is damn delight. “The Mighty Ducks” may do a lot of run of the mill things, but it does all of them well and earns its place among the culturally relevant elites. Under any kind of scrutiny, the whole plot falls apart. But that’s not the point, and both the script and film as a whole understands this. They relish in the silliness of the story, double down on every predictable moment, and is more than content to just let the story unfold exactly as we know it will.

“The Mighty Ducks” is simple: If it ain’t broke, don’t fix it. It is precisely BECAUSE of its adherence to its genre that has made is so successful and still to this day lives on both in real life and in film. It doesn’t try to reinvent the wheel, so we can tap into the silly, childlike wonder of the wheel it spins.

The point is, this movie has a surprisingly low score, one that feels insultingly low when you stack it against how beloved and culturally relevant the franchise has become. Is it a perfect film? No. It is extremely predicable? Sure. But does it deserve to be rated at 21% on Rotten Tomatoes? Absolutely NOT. You will never convince me that “The Mighty Ducks” is in the same category of films as “Serenity” (not the “Firefly” movie “Serenity,” the other one you didn’t watch), “Men in Black: International,” “Dark Phoenix,” or countless, straight to VOD Nicolas Cage films. And that’s JUST films with 20% on Rotten Tomatoes released in 2019. None of these films have even been able to stick around past the year they were released, let alone create a 30 year franchise that continues to endure and instill joy and hope in both children and adults alike. “The Mighty Ducks” deserves better, and Rotten Tomatoes has this one very, very wrong.

So, to the 30+ critics who have incorrectly scored “The Mighty Ducks” at 21% on Rotten Tomatoes I have only this to say to you: