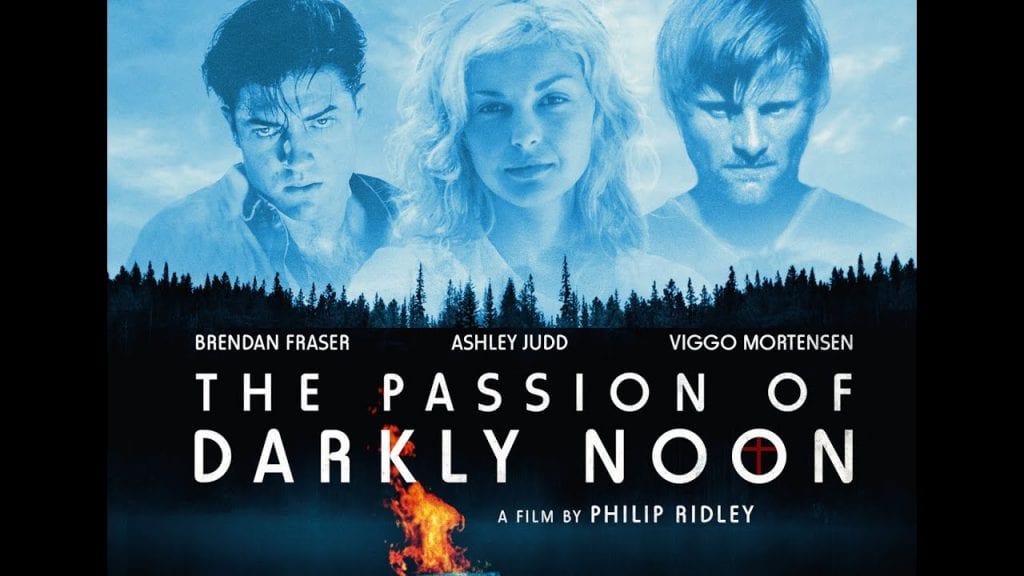 I think we can all agree that we don’t deserve Brendan Fraser. Once poised to be the next big thing in Hollywood then struck with compounded tragedies that almost took his life, his small resurgence the big screen in the form of “Doom Patrol” and other appearances is more than welcomed. It’s legitimately hard not to root for a guy like Fraser, an actor with a calm, reserved demeanor and an incredible, captivating presence on screen. A long time champion of Fraser’s work, I wanted to take a look at the long list of lesser known appearances and films in his very extensive filmography. Look, I’m not really in a position to take on another review series, but I feel like Fraser’s talent and work deserves a closer look. That takes us to “The Passion of Darkly Noon” on Amazon Prime.

Before we get to the meat and potatoes of this, I want to clarify what this series will actually be about. It will not always be a review of the film itself, but rather looking at Brendan Fraser’s performances in otherwise unheralded films. This is important to understand, because the merits of the film itself may not always be worth watching or be recommended. This is Brendan Fraser centric, so whether or not the movie is good or bad is secondary to how good or bad Fraser is in them. This will in turn make some of these write ups shorter than others, and there may very well be times where I don’t even get into what the film is actually about or whether or not it’s worth checking out. I don’t want anyone thinking they’re going to get a full on review of films here; this is about why we love Brendan Fraser.

And that takes us to “The Passion of Darkly Noon.” Don’t fault yourself if you’ve never heard that this film existed or that it stars Brendan Fraser, Ashley Judd and Viggo Mortensen. This was a film I didn’t even know existed until I came upon it scanning the dark corners of Amazon Prime’s extensive filmography. The cast alone piqued my interest, and the film ended up being almost too indie for its own good. It is very, VERY strange, and feels like a lot of ambitious ideas created for a novel of stage play that never quite transfers to the medium of film as the writer and director may have intended. Truthfully, “The Passion of Darkly Noon” borders on parody, and at times has the potential to being viewed as an unintentional comedy. There’s a LOT of overacting going on here, especially from Judd, but that’s not by any fault of her own as the trio of stars do the best with what they have. Hell, Mortensen doesn’t even have lines as he plays a mute here, and proves why he’s one of the most underrated actors out there (spotlight here).

Appropriately serving as the catalyst for this entire idea is Brendan Fraser’s Darkly Noon. Fraser demonstrates all the makings of a star here, beautifully transforming this strange script and story into a believable character that is both sympathetic and haunting all in one. Fraser portrays a man who has recently escaped a religious cult and is discovered by a scantily clad wife deep the backwood forests. Fraser’s Darkly is taken in by this very attractive woman, and now being removed from his parents (who were brutally murdered by the townspeople in a revolt against their cult) begins having uncontrollable urges and visions about her. The film essentially becomes the descent into madness for Darkly, who is incapable of understanding the world outside of his upbringing and is inescapably haunted by the tragic events surrounding his escape.

Fraser is the lynchpin to this bizarre story, portraying Darkly as a stuttering, naive lost puppy with an unmanageable darkness brewing inside of him. Fraser somehow draws out sympathy and disdain for Darkly. You want to feel bad for him, but you also want whatever is boiling beneath the surface to be destroyed. Fraser is calculated in this portrayal, making his transformation from lost puppy in need of home to the harbinger of religious purging through violence more than believable. As a Fraser fan, “The Passion of Darkly Noon” really makes you wish Fraser would go bad more often. While he certainly nails the hero to root for with magnetic perfection, he has the talent to be a believable, disturbed villain, too. If for nothing else, “The Passion of Darkly Noon” is worth checking out for that alone, as it is the perfect example of just how versatile Fraser can be.

I don’t know that I can recommend “The Passion of Darkly Noon” as a film to anyone. Calling it weird is an understatement, and even if the casting makes you curious, the story being told is hard to swallow even for the most ardent of indie film, cult classic fans. But if for nothing else, Brendan Fraser proves a LOT here, and does so very young in his career as the film was released in 1994. Fraser as a mentally tormented, meek mannered, religious cult escapee haunted by his own misunderstanding of the world around him IS worth checking out.

Brendan Fraser is the reason “The Passion of Darkly Noon” functions as a watchable film. And that is exactly why he deserves a series highlighting these ventures.

What are some of your favorite Brendan Fraser films?