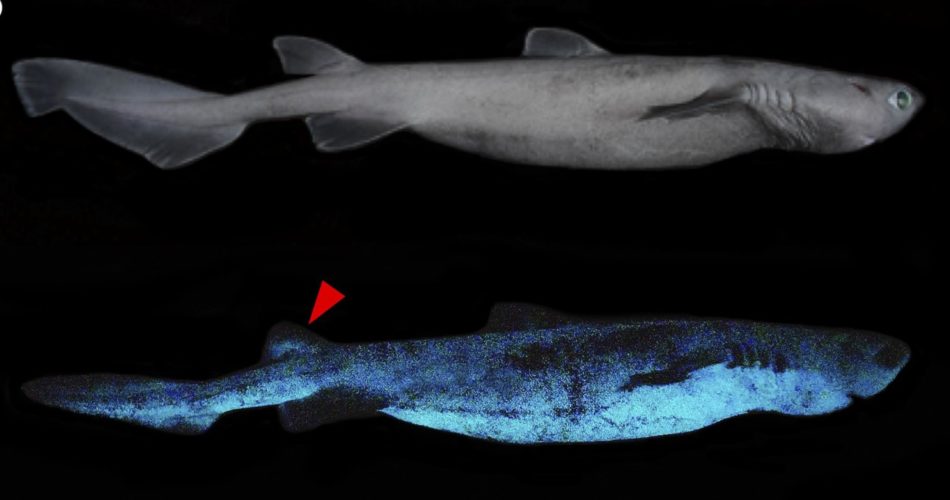 The Kitefin Shark is Now the Largest Bioluminescent Vertebrae on Record

There are certain things that just seem so magical. While we don’t have unicorns or even sharks with freaking laser beams attached to their heads, we do have glow in the dark sharks. Marine biologist Jérôme Mallefet and his team from the Université Catholique de Louvain Life Institute in Belgium have published their research on finding what is now the largest bioluminescent vertebrae on record.

Published in the Frontiers in Marine Science journal along with photographs of the creatures they studied the three deep-sea sharks show off their bioluminescence. Specialized cells in their skin produce a soft blue-green light.

All of these sharks live in the area of the ocean called the “twilight zone,” which extends from a depth of 660 to 3,300 feet below sea level. A space where solar light cannot penetrate.

Currently Jérôme Mallefet is studying these sharks to determine the reason behind them being bioluminescent. They predict that they will find that they use this as a form of camouflage to protect them from other predators. Study still needs to be done on whether or not they are being hunted and if this is a function of survival.

He says that the sharks are using the light to “disappear” and they hide among the light coming through from the surface.