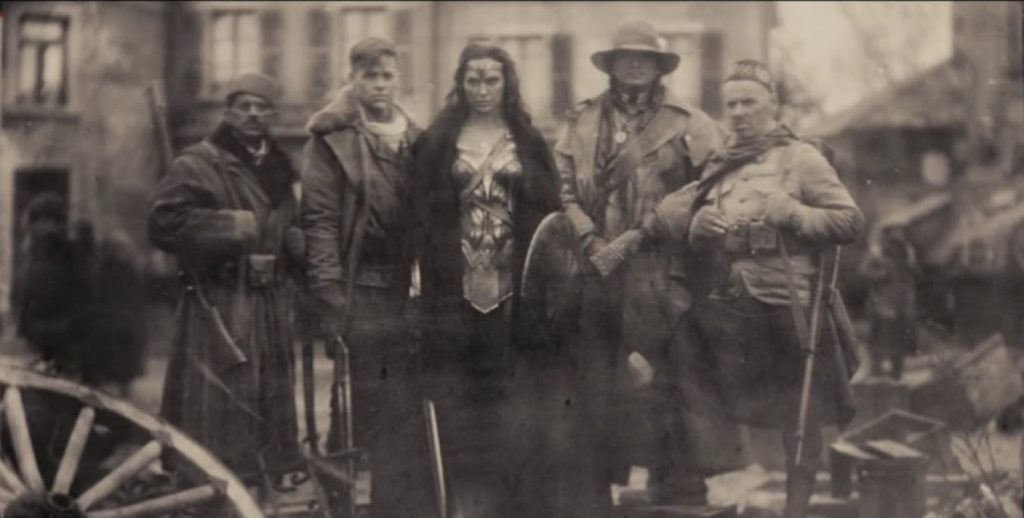 The resulting image Bruce Wayne uncovers of Diana and her warriors.
Movies

While Bruce Wayne (Ben Affleck) was doing his due diligence and looking into the histories of these people with fantastic abilities, he comes across photos of Diana (Gal Gadot) from decades prior, where she looks absolutely no different, right? To sort of illustrate her physically unchanging nature. Apparently the image Bruce discovers was originally going to be this wet plate shot of Diana and her band of warriors from during the Crimean War, rather than the one we see from the liberated town.

Director Zack Snyder confirmed this during a recent stop by ComicBook Debate, showing the image. Snyder later gave TheNerdQueens the full res image, and allowed them to share it with all of is. It’s a pretty great photo, honestly. But….are those severed heads in Wonder Woman’s hand?!

Yes, yes those are indeed heads.

This actually tracks with what “Wonder Woman” Patty Jenkins told Marc Maron during her stop by his WTF Podcast, citing how it felt like certain creatives at Warner Bros. Pictures didn’t know the character.

“Even when I first joined ‘Wonder Woman’ it was like, ‘Uhh, yeah, OK, but let’s do it this other way.’ But I was like, ‘Women don’t want to see that. Her being harsh and tough and cutting people’s heads off… I’m a ‘Wonder Woman’ fan, that’s not what we’re looking for.’ Still, I could feel that shaky nervousness [on their part] of my point of view.“

So the above image definitely backs up that quote of Jenkins’, and maybe, just maybe, that was Snyder’s intention with showing the wet plate so soon after that podcast.

“Wonder Woman 1984” is currently in select theaters, and available to stream on HBO Max. A third film starring Gal Gadot and directed by Jenkins was confirmed as being on the fast track shortly after it released.

“Zack Snyder’s Justice League” will hit HBO Max at some point in March 2021.