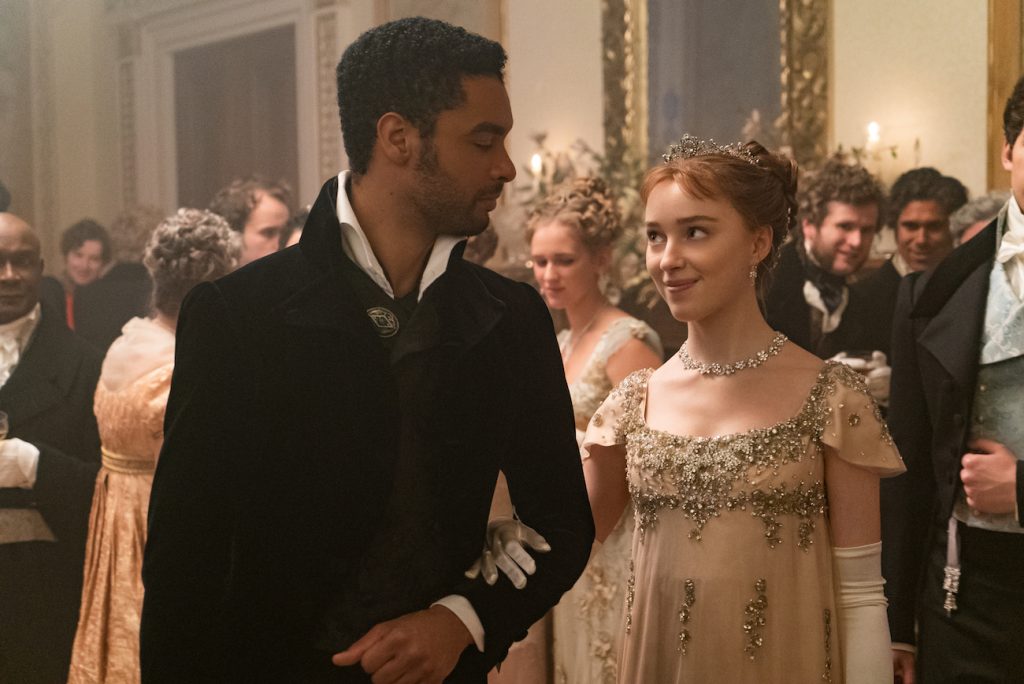 “Bridgerton” is THE Romantic Comedy Series of 2020 [Review]

As it turns out, Netflix has delivered one of the most singularly delightful and charming presents of the holiday season with “Bridgerton.” There’s few networks out there sporting a myriad of holiday romance films, but if you want something that just is both wonderfully crafted, staged, and performed- then once you’re done watching “Wonder Woman 1984,” switch over to Netflix and dive into “Bridgerton.”

It’s a period piece set during the Napoleonic era (1813 to be specific), and is based on a series of novels by Julia Quinn. To be clear, many romances set during the Regency tend to be rather over the top, but this one is just unapologetically charming.

The series’ core is the Bridgerton family, and their eldest daughter who is coming out into the high society of London for the annual engagement season. Where eligible daughters and sons are trotted out and flesh-eating mothers play a Machiavellian game of politics to get the best possible matches. The social fabric has been perturbed by a new broadsheet being published around town by an anonymous Lady Whistledown (and voiced by none other than Dame Julie Andrews) who dishes all the dirt with the utmost candor and literary flare.

There’s a brilliance in the casting of British actress Golda Rosheuvel as Queen Charlotte (wed to a much-afflicted King George III). Many of the ladies of the queen’s court as well as key members of society (as well as the series lead romantic interest, played by Regé-Jean Page) are similarly non-white, and it’s done with such an ease that it’s quite refreshing.

The costuming- which maybe wouldn’t hold up to a re-enactor’s costume college inspection for historical accuracy- has the vibrant color palate of the era, and is close enough for the most part to be enjoyable rather than distracting. It’s nothing like the dumpster fire that was The CW’s “Reign.” It is very much a vibrant feast for the eyes.

“Bridgerton” Showrunner Chris Van Dusen and his costuming team has spoken of how there are more than 700 costumes in the first season, and the series female lead, Daphne Bridgerton (Phoebe Dynevor) has 104 full costumes for the character alone.

There’s drama, comedy, and romance. Justice is generally served out (eventually), and nothing comes too easy. Overall it’s a delightful treat that one can readily binge in a day.