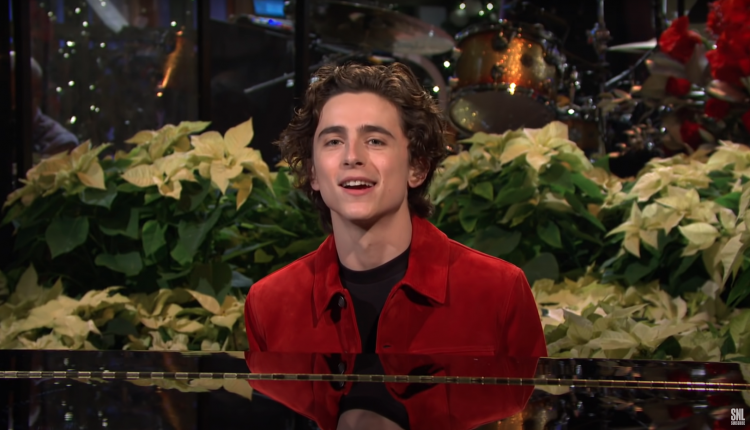 This past weekend, 2-time Oscar nominee Timothée Chalamet hosted “Saturday Night Live,” with musical guest Bruce Springsteen and The E Street Band. While we were really were hoping for a “Dune” sketch, we have to say the resulting episode was one of the better ones from the past two seasons.

Admittedly, the thing that really sold us on Chalamet hosting came during his monolog, where he shared a bit of his personal history with the long-running 46-season sketch comedy show.

Turns out, Chalamet’s mom is an actress too, and during the 1990s, she did background work on “Saturday Night Live.” Back in SNL season 19, episode 13 (which aired on February 12th, 1994 available on Peacock streaming service) with hosts Alec Baldwin and Kim Basinger, Chalamet’s mom was featured in a classic sketch- “Massive Head Wound Harry.”

In the above photo, you see host Baysinger, cast member Dana Carvey as Harry, and that blonde with the bangs and the drink? That’s Chalamet’s mom, Nicole Flender! She’s accompanied her son to various award shows, some highlights which you can see here.

That look of abject horror at Massive Head Wound Harry’s….massive….head wound, while Carvey and the late great Chris Farley ham it up.

You can see all of Chalamet’s monologue on “SNL‘s” official Youtube channel:

We’re hopefully still getting “Dune” on October 1st, 2021 in theaters and HBO Max, which will star Chalamet as Paul Atredies.