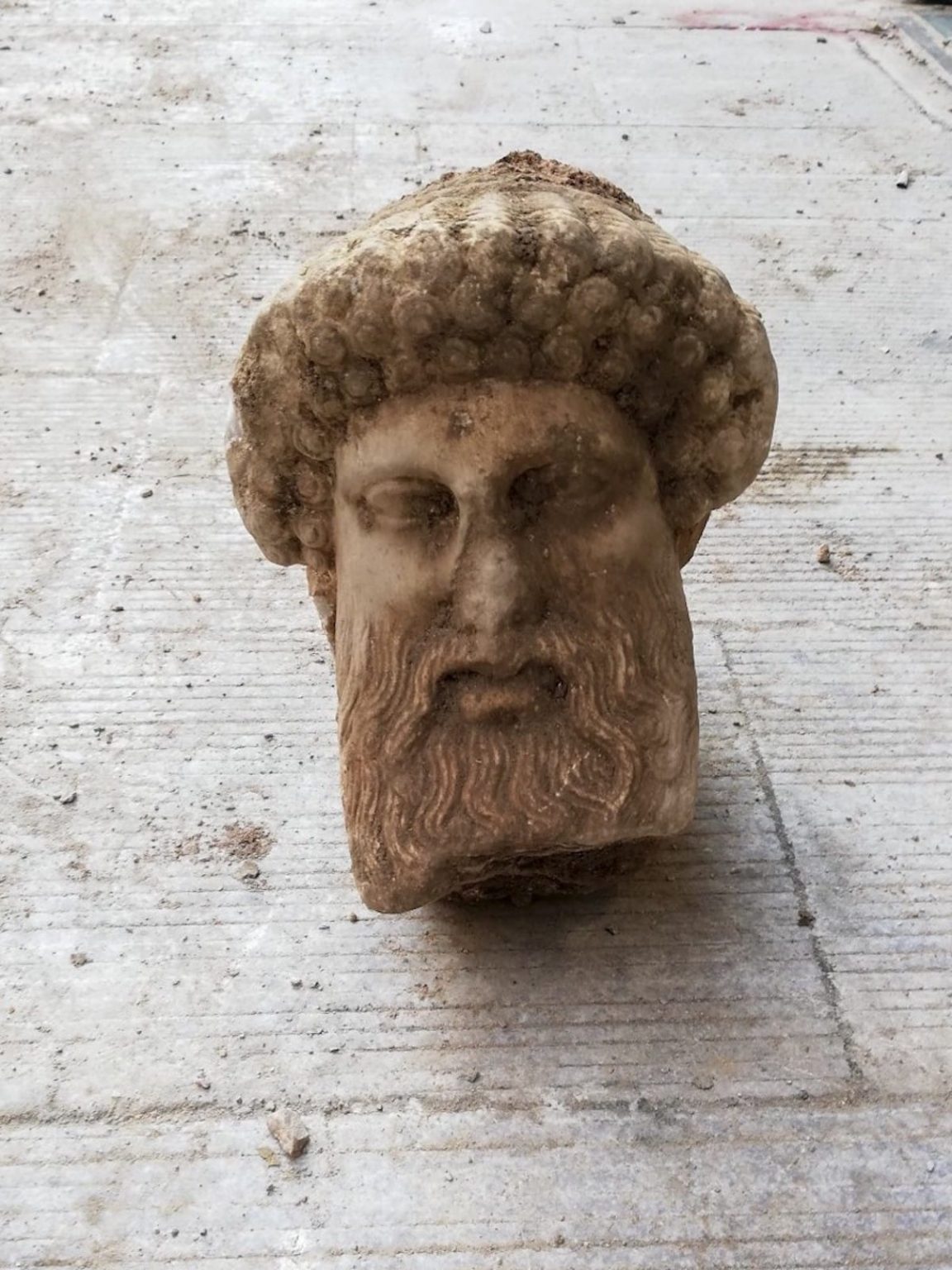 Exemplifying the idea that in 2020 everything ends up in the crapper- the Greek Culture Ministry announced that routine sewage work in Athens had unearthed an ancient bust of the Greek god Hermes in a drainage duct approximately 3 ft. beneath St Irene Square.

The discovery occurred on none other than Friday the 13th, the unluckiest day of the year. The bust appears to date from around 300 B.C.

In ancient Athens, street markers were square pillars topped with a bust of Hermes – and an erect phallus. The new-found bust likely came from one of these street markers or “herms.” Unlike many depictions of Hermes as a youthful god, the bust is of a more mature bearded-god.

Hermes was the Greek god of trade, wealth, luck, fertility, animal husbandry, sleep, language, thieves, and travel. But he is most well-known as the messenger of the gods and is often depicted with winged feet or sandals (yes, that FTD logo is Hermes or “Mercury Man,” as Hermes was known as Mercury in Roman mythology). However, Hermes has no relation to that other famous figure with winged feet, Namor, the Sub-Mariner from Marvel comics. Namor was the ruler of Atlantis and sometimes friend, sometimes foe of superhero teams including the Fantastic Four, Avengers, Defenders, and X-Men.

In mythology, Hermes was the son of Zeus and the nymph Maia. He was the father of Pan and the leader of both the nymphs and the Charities (Graces). Hermes was something of a trickster and thief, having stolen at various times Apollo’s herd of sacred cattle, Poseidon’s trident, Artemis’ arrows, and Aphrodite’s girdle. He was credited with the invention of fire, the alphabet, dice, the lyre, and the pan flute. One of his other roles was to guide the souls of the dead to the river Styx in the Underworld, so that Charon could ferry them to Hades.

In Homer’s “The Odyssey,” Hermes aids main character Odysseus on his quest to return home to Ithaca. He also appears in “The Iliad,” aiding Trojan King Priam when he attempts to recover the body of his son, Hector. Hermes is referred to as “Hermes the guide, slayer of Argos” by Homer as he was said to have been sent by Zeus to slay the monster Argos in order to free Io, a woman Zeus lusted after. However, Hera had set Argos to watch over Io to thwart Zeus’ pursuit of her. Hermes lulled Argos to sleep before killing him. Somewhere in there Io was transformed into a heifer, but was eventually transformed back to human. Io was an ancestor of the heroes Hercules and Perseus.

The newly recovered bust was transferred to the Athens Ephorate of Antiquities, an agency of the Ministry of Culture. The ministry has said that Greek sculptor Alcamenes was the most likely creator of the bust. After serving as a street marker, the bust at some point was later built into the wall of a drainage duct.

Fortunately, it was in “good condition” when rediscovered. Perhaps this newfound representation of the god of luck could bring a little good fortune to the remainder of 2020.