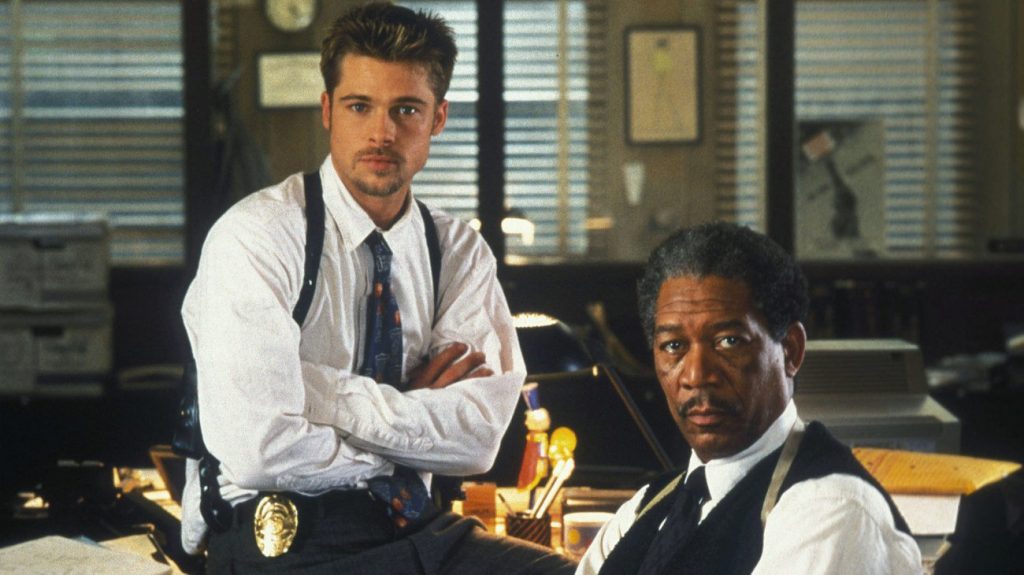 As fate would have it, September of 1995 released three of my favorite films, “SE7EN” making that list. It’s actually rather challenging to write a review of a film I genuinely love, and have for many years. Taking a step back and looking at a beloved film critically is far more difficult than anticipated, but I’ll do my best.

“SE7EN” not only hosts a star studded cast turning in some truly incredible performances, it is also helmed by one of my personal favorite directors, David Fincher. It is a chilling crime-noir thriller packed with brilliant performances, sharp directing, and gritty visuals.

The film follows soon to be retiring Detective William Somerset (Morgan Freeman) partnering with his short tempered replacement David Mills (Brad Pitt) as the investigate a series of brutal murders seemingly inspired by the seven deadly sins. Gwyneth Paltrow plays Tracy Mills, wife of Pitt’s David. As the elusive killer escalates the murders to become more and more brutal, the detectives find themselves entangled in a game of cat and mouse, one that will alter their lives forever.

Fincher proves he has a knack for the dark and gritty. Make no mistake, “SE7EN” is brutal.

As it turns out, that was primarily at the behest of both Fincher and Pitt. The famous “what’s in the box?!” scene was actually rejected by the studio with a rewritten ending that was more in line with traditional detective films. Luckily for us, the original script was sent to Fincher who agreed to direct the film after a long hiatus (coming off a horrendous experience with “Aliens 3“) but only if the original ending stayed. Pitt as well advocated for the original ending, and despite continued pushback from the studio.

The film excels by tackling its dark themes head on. It depicts both brutality and psychology of criminal behavior while being careful not to exploit its victims. Fincher’s depictions of evil acts are truly what make the film unforgettable. There is so much iconic imagery here, showing just enough gore to shock its viewers without assaulting them with it.

Despite its graphic nature, Fincher crafts a balanced thriller that simultaneously shows as much as it tells while also leaving plenty to be imagined (even if you would rather not to). “SE7EN” ranks as one of Fincher’s best, and is a testament to his skill behind the camera and ability to tell dark stories well.

Freeman and Pitt turn in impressive performances, even for their extensive resumes of doing so. Somerset and Mills are two sides of the same coin. One is jaded and tactical, opting to identify the killer through his psyche and research analysis. Mills is hot headed and idealistic, hellbent on kicking down doors and doing whatever it takes to catch his killer.

These opposing dispositions are the driving force of the film, and make the late appearance of the calculating killer of John Doe (Kevin Spacey) all the more intriguing. Spacey is also terrifying as the villain, only on screen for a short period but making the list of top villains of all time. Spacey’s Doe is cold and righteous, completely detached from the murders yet fully invested in their necessity. He is void of empathy yet charged with righteousness, relentless in his purpose demonstrated through his brutal killing spree. He is the epitome of evil, and Spacey is talented enough to display all of this with just 20 minutes of screen time. The famous ending of the film pits all three of these personalities against each other, culminating in an unforgettable climax- one of the best of its genre.

Lastly, the films setting plays a pivotal role that cannot be overlooked. It is unspecified yet universal, mirroring the darker side of any major downtown city. This also sets “SE7EN” apart from other crime thrillers and police procedurals.

By only being inspired by cities like Los Angeles and New York, the film allows itself to take place anywhere. This makes it all the more haunting, psychologically placing these murders and brutal depictions of evil deeds where ever the viewer may live. It also allows the filmmaker to have the freedom to create any world they want, balancing the exaggerated grit and horrors of city life with real world inspirations.

This film earns its acclaim, packed with stellar performances, brutal visuals, and terrific directing. It is a graphic look at evil, murder, and psychology, asking tough questions through its dark depictions without ever feeling as if it’s preaching to its audience.

“SE7EN” is not easy to stomach, and won’t be for everyone. If you’re a fan of crime thrillers and haven’t seen it, I would question your fandom. If you’re not a fan but feel as though you should see what all the talk is about, just know you’re in for some unforgettable imagery. If nothing else, you’ll finally be in on the joke when you hear someone yell, “What’s in the box?!?”