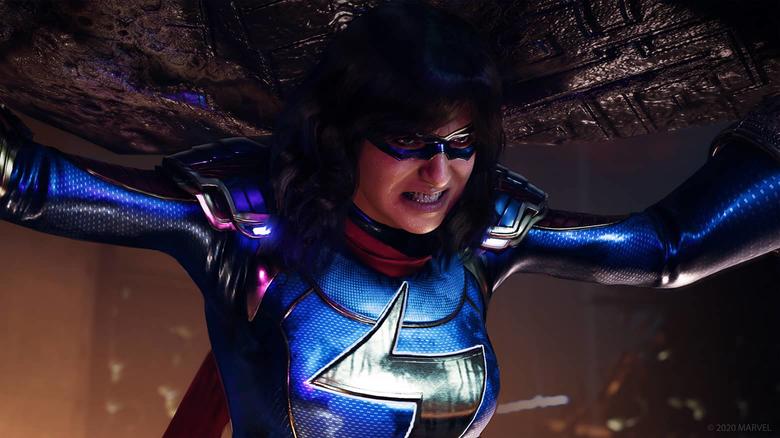 So when the trailers for Marvel’s Avengers first came out at 2019’s E3, I considered it to be a bit of a snooze fest. The gameplay looked cool, but with a narrative which surrounded five characters that have become synonymous with the Avengers- Captain America, Black Widow, Iron Man, Hulk, and Thor- it just kind of looked bland and uninteresting.

During the same year however it was announced at NY Comic Con, that the modern day Spider-man would be a playable character; Kamala Khan as Ms. Marvel would not only be in the game but a part of the story as well. So going into this game I had two queries: will the gamestory be engaging and does it do the character of Kamala Justice ?

Just a PSA – I won’t make any comments about the gameplay because I haven’t actually played it. But since I’ve watched the story mode, I will be commenting on the story and the portrayal of the characters.

With very slight spoilers ahead, let’s get to it.

Now Kamala’s main story role here is to not only be the audience’s vehicle to understanding the world, but the inciting character that brings the band back together.

After a battle goes south, the world loses faith in the Avengers and they lose faith within themselves. After hacking into an A.I.M database, Kamala Khan realizes how bad the situation is and goes to the Avengers for help.

The overall story is a solid, basic story that while may be predictable to those who know storytelling, does a great job of introducing the viewer into the superhero world.

Predictable in the sense that you know that the Avengers will get back together, that Captain America isn’t really dead, as well as certain character reveals; if you know the tropes of the genre. The writing has done a good job of setting up snappy dialogue between friends and enemies, interesting set ups for missions, and reasonable character motivations on both sides of the conflict.

If there’s any relationship between her and the Avengers that needs to be called to attention it’s Hers’ and Bruce Banners. They have this reluctant teacher and wannabe student relationship that becomes really endearing and one of the most memorable friendships throughout the game.

I mean, you can basically substitute the word Inhuman with any other oppressed group. Like the X-Mens mutants, switch out Inhuman for gay, minorities, handicapped ect, and you’ll get a metaphor for oppressed groups being told by those with power that they’re wrong for being who they are. And that’s the big twist here ; A.I.M. telling the world that Inhumans are sick and will eventually die when the truth is, is that they’re actually completely safe and functional in society.

And because of that, Kamala is the heart of this story. She’s the catalyst that brings the Avengers together and she’s the one who proves to herself and others that anyone(particularly Inhuman) can make a difference. Her presence, one of optimism and belief in the dream of heroism, really grounds the story to themes of redemption of perseverance. She’s the right amount of spunk and eagerness that helps keep the character engaging throughout the story.

Although there is an interesting story bit where the villain claims that all Inhumans are violent and unstable, and then Ms. Marvel beats him up and impales his robot with a piece of a bridge. It’s a very cinematic moment but it only proves him right. If they had just added an extra scene where she could’ve had the chance to kill him but didn’t, then that would’ve really nailed home the idea that she’s in control.

And hey, since the media’s portrayal of the Inhumans was such a factor in the story, if they had shown up and showed her heroics for all to see – that would’ve been nice. But still, watching her take down the villain in such a dramatic fight, was really satisfying.

So overall, Kamala is a great audience vehicle into this world and is overall this endearing enjoyable person who was greatly adapted from page to game.