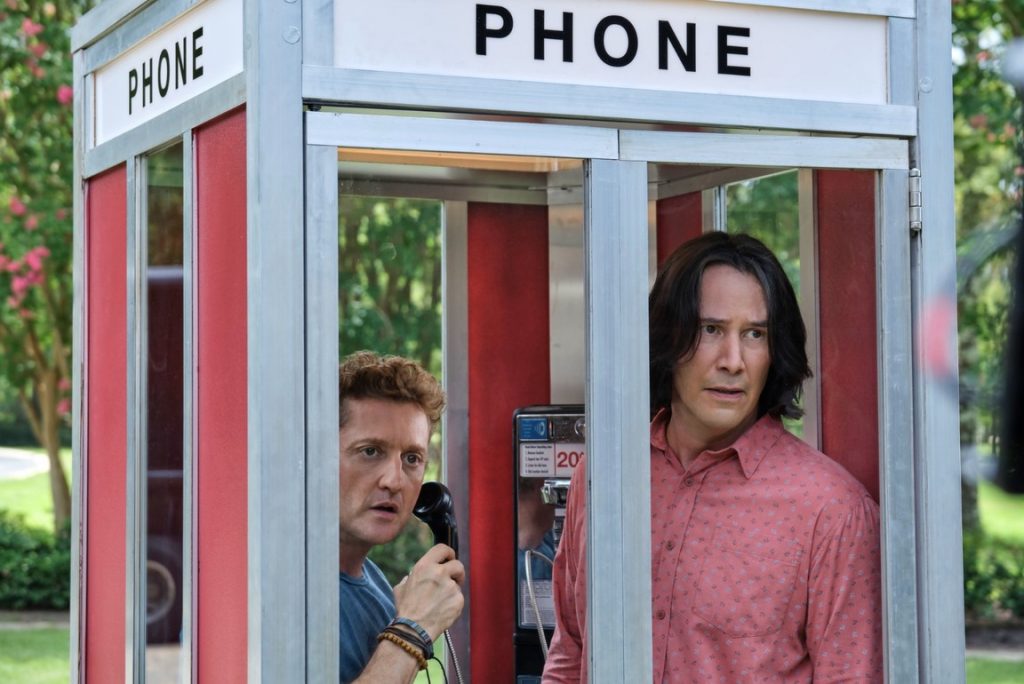 It has been more than three decades since we first climbed into that phone booth with the founding members of the band Wyld Stallyns, Bill & Ted. Seeing them again has that awkwardly familiar feeling of seeing those dorky friends at your high school reunion; they’re definitely older, and perhaps a their quirks are a bit out of fashion by a generation, but there’s something refreshing seeing that at least some things really haven’t changed. In “Bill & Ted Face the Music,” we’re still playing that one chord that we have across three films now (as well as a cartoon series), but with all in 2020 that is unfamiliar, anything that makes us smile is a welcome change.

Bill Preston (played by Alex Winter) & Ted Logan (played by Keanu Reeves) are visited by Kelly (played by Kristen Schaal), a messenger from the future, who turns out to be Rufus’ (the late George Carlin) daughter. It seems that the song which the Wyld Stallyns were supposed to play to bring the world together in harmony hasn’t yet come to pass.

Back in ’91, in “Bill and Ted’s Bogus Journey,” they played to the world, but it seems that the harmony didn’t really take hold. So at the start of “Face the Music,” they are playing to rooms holding nearly dozens of people. Something is going wrong in the future and Kelly has come back to tell Bill & Ted that they’re now on a countdown to the end of the world, unless they can create their uniting song.

This time there are Mini-Me versions of Bill & Ted in the form of their daughters, Wilhelmina “Billie” Logan (Brigette Lundy-Paine) and Theodora “Thea” Preston (Samara Weaving). Both of which are the same sort of ephemeral spirits as their fathers. When Bill & Ted are presenting one of their new compositions at a wedding, it’s only the daughters that appreciate their father’s artistic abilities).

It’s not a new rodeo, we’ve had the duo having to save the world before, and they’re racing to do it once again. There are some missteps, the fact that for the third time out of three films that they chose to recast Bill & Ted’s wives with younger actresses feels wildly inappropriate at this point. Even if any of the past four actresses were unavailable, they could at least have kept the ages relative to the guys. There’s also some awkward moments with how impractical both Bill & Ted are as adults (it’s commented in the film that it’s the wives that have been the only ones able to hold jobs during the entire thirty year span).

Also, with Ted, it’s hard not to see John Wick, or to wonder exactly what kind of a simulation Neo is running. There’s moments where the story gets towards the absurdest, but then if you pause and remember how much the first film is beloved while having it’s own crazy antics – it’s like the titular characters; they haven’t really changed all that much. The film isn’t really going to save the world, however it might just give some light-hearted moments and a few smiles in a world that dearly needs it.

Keep an eye out for our interview with writer Ed Solomon soon!

“Bill & Ted Face The Music” is currently available on VOD, and in select theaters now.