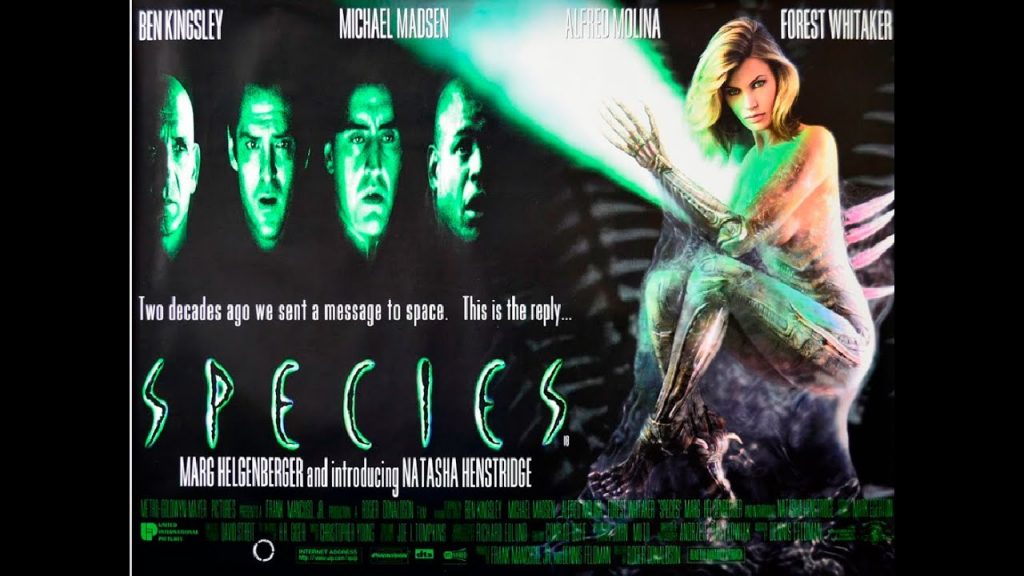 The summer of 1995 was a strange year for film, and none more telling than “Species.” A B-movie that feels more like a Skinamax After Dark than a theatrical release, it’s almost a feat in and of itself that it even got made. This is one of those films that raises more questions than answers the further it goes along. Who thought this was a good idea? How did they get an all 90s star cast? Does Sil own a shirt or is she going to spend this whole movie topless?

And yet despite all of its flaws, “Species” is unapologetic in both the silliness of its premise, and its relevance of its characters. The film never seeks to justify anything or anyone, and that turns out to be a large part of its charm. Its so bad it’s good, and whether or not that was intentional, its the only way to enjoy it.

“Species” follows Sil (a very young Michelle Williams, and later the acting debut for Natasha Henstridge) a genetically enhanced human/alien hybrid that grows at an unprecedented rate. After realizing the experiment may grow beyond their control, Dr. Xavier Finch (Ben Kingsley) is ordered to destroy the young alien girl. Of course, she escapes and Finch is forced to call in a group of scientists and a government assassin to track her down before she can procreate and make more aliens like her. As the bodies continue to stack up, our rag tag group must do all they can to find Sil and destroy her before it’s too late.

On paper, “Species” seems simple enough for some good old fashion sci-fi horror. There is plenty of violence, sex, and explosions, checking off all the boxes for a sci-fi B-movie. None of these things ever really make any sense, and no one is developed beyond their assigned titles.

There’s no reason as to why anyone involved in hunting Sil exist at all, but the film doesn’t care. You can ask all the questions you want about why an empath (Forest Whitaker) bordering on telepathy is part of a search and destroy government task force; “Species” has zero answers for you. He’s there, his “feelings” are vital to the mission, so it’s best to just let it happen. Every character in the film is like this, which is unfortunate for such a stacked cast. It includes Michael Madsen, Forest Whitaker, Alfred Molina, and Marg Helgenberger.

As with most of his roles, Madsen seems to be the only one aware of the film that’s being made. For actors like Whitaker and Kingsley, “Species” is about as close to slumming it as you can get. But Madsen seems recognize that the film is silly and plays his government assassin role as such. He shrugs off any notion that this is a serious sci-fi exploration of genetic experimentation. He even has a line where he sums up the film in its entirety, and does so with such tongue and cheek you shrug with him and strap yourself in for the ride. For Whitaker, Kingsley, and even Molina, they didn’t get the memo that “Species” isn’t suppose to be serious. It’s not entirely their fault, but it’s unfortunate they couldn’t see the film for what it truly is and play their characters as such.

Natasha Henstridge as Sil is good too; playing her naivety and proclivity for violence with keen balance. Yes, her character is highly sexualized and her very existence is driven by her need to have sex and make a baby, but Henstridge also seems to be aware of what’s really going on here, too.

There really isn’t much else that can be said about “Species.” It exists, and perhaps even more surprising, they made 3 more sequels. The film is only as good as it is bad, and I’m not entirely sold on the idea that director Roger Donaldson meant it to be so.

For Donaldson and even writer Dennis Feldman (the only major film of note he’s written by the way) they seem to have made “Species” with a bit of misguided grandeur. There’s some hints of intention to make a legitimate sci-fi horror but constantly fall more into the sci-fi exploitation. This very well could have been intended, and perhaps on some level they were attempting to combine the two to make it unique.

For me, there’s far too much skin for it to be consider legitimate, and far too much seriousness and science mumbo jumbo to be exploitive. Were the film one or the other, it may actually be good on its own merits. However, because it isn’t either, it comes down to how you choose to view it.

If you choose to view “Species” as a purely exploitive sci-fi horror B movie after dark, it’s a lot of fun. You can turn off your mind and just let the ridiculousness happen. You may find yourself laughing where there isn’t humor, but it truly makes the viewing more fun. If you choose to buy this as a legitimate sci-fi horror film, I fear you may have been sold a bill of goods. The film is simply too nonsensical to be taken seriously in both science, plot and characters, and there is just too much emphasis on Henstridge remaining topless to not be trashy.

When it comes to watching and enjoying “Species,” choose wisely.