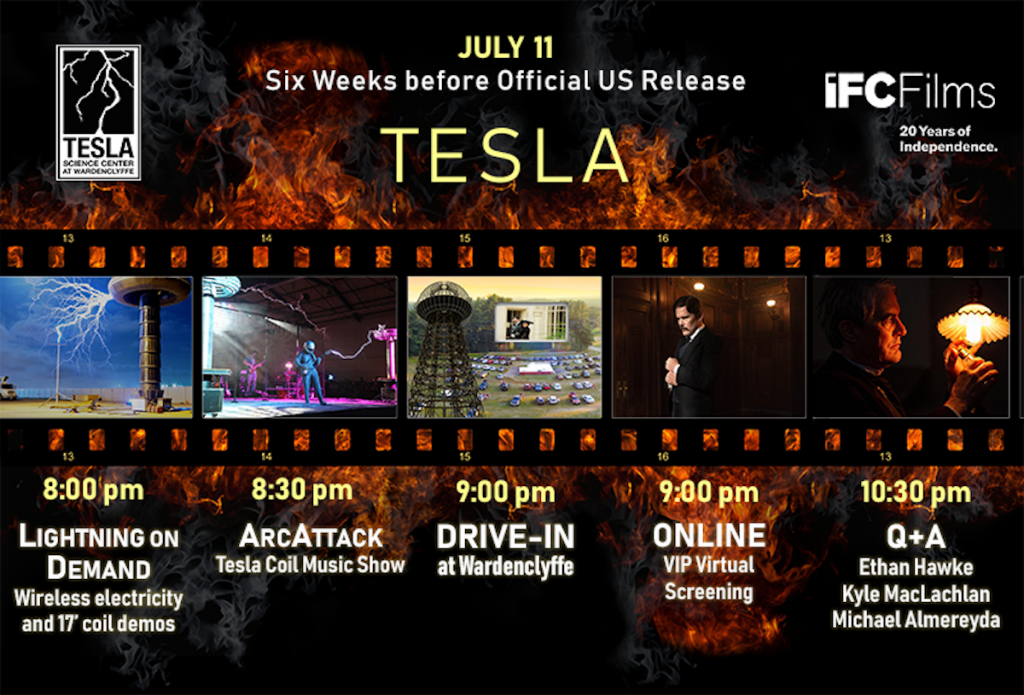 In a perfect world, schoolchildren would learn about the marvelous Wizard of the West, inventor and man out of time, Nikola Tesla, in tandem with names like Thomas Edison, Marconi, and Bell.

Thankfully, the tides have turned enough that when you mention Tesla to people, they don’t automatically ask “you mean the 80s hairband?” Usually yes, they’ll think of the car company, but even that as opened the door for many to learn about the man who really invented radio.

If we could, we’d be on a plane for New York right now to take part in the big giant birthday party extraveganza happening at the site of Wardenclyffe Tower, happening TOMORROW, July 11th!

Tesla Science Center at Wardenclyffe (TSCW) is hosting an advance screening of the IFC Films “Tesla,” that will feature a live Q&A with starring actors Ethan Hawke and Kyle MacLachlan, as well as the movie’s writer and director, Michael Almereyda. TSCW will present TESLA to honor Nikola Tesla’s 164th birthday and raise funds for critically needed virtual education programs and resources.

“Tesla” will be presented by TSCW six weeks before its official US release for both an online screening and a Drive-In Movie Night at Wardenclyffe, the only remaining laboratory of inventor Nikola Tesla.

For tickets and details, please visit the official website for the TSCW event here.


Why is this important, you might ask? Well, >this< author is a bit of a Tesla nut, insofar as I have a pretty large portrait tattoo of the man on my thigh. Unfinished, but, still beautiful and special.