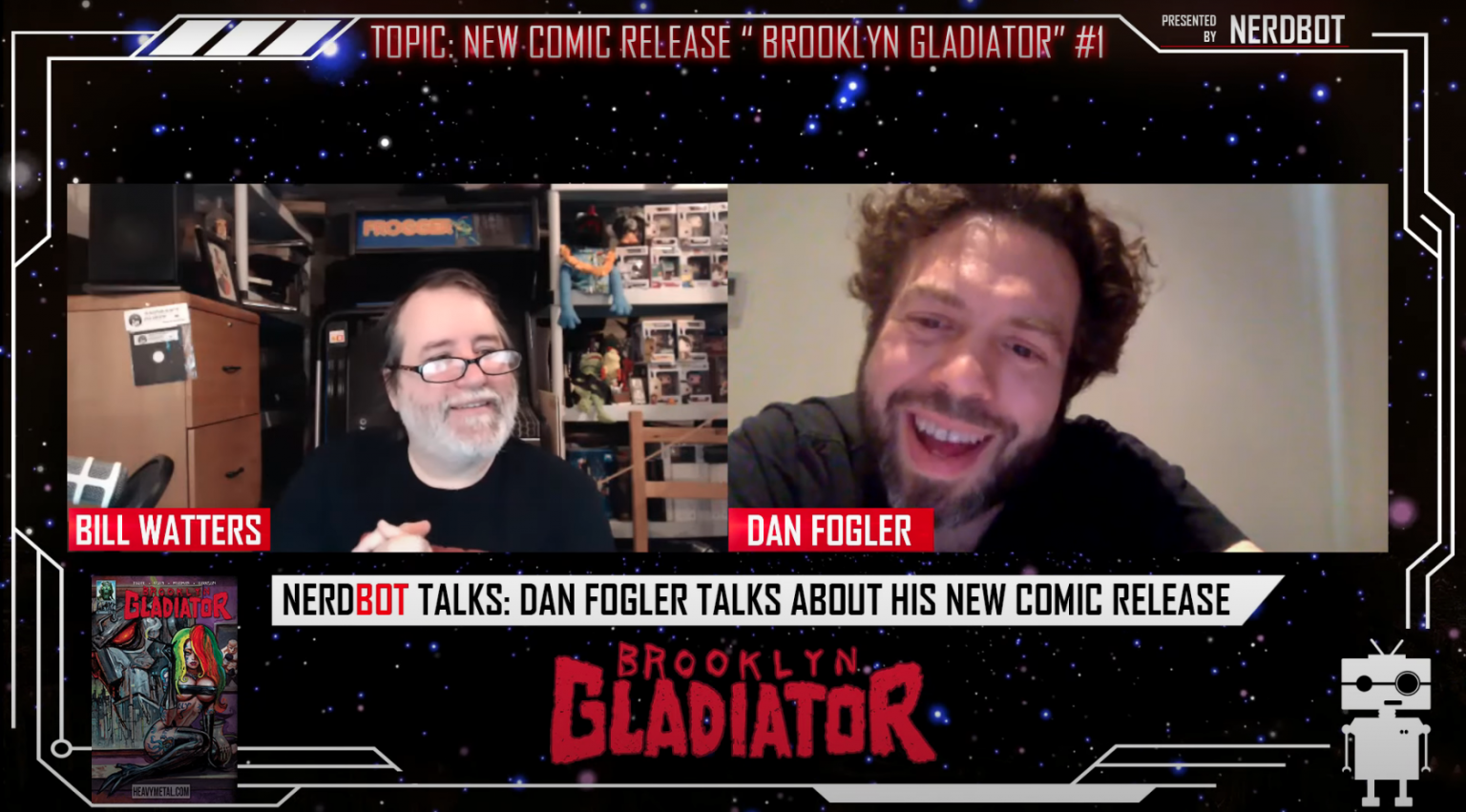 Worldwide leader in science fiction comics Heavy Metal has a new comic series by geeky icon Dan Folger, and we were lucky enough to chat with him about it. The first of three titles coming from “The Last Storm” shared universe, Brooklyn Gladiator is a frightening glimpse into a fictional future that feels all too possible if we’re not careful.

“This is a world of more crust than pizza, More filter than cigarette, more commercials than television. More lies than truth,” Folger says about this tale of a rough and ready badass living in Brooklyn 2033 who could outdrink the likes of Han Solo, Jack Burton, and John McClane- John Miller.

“John Miller is public enemy number one, fighting nanite-enhanced maniacs in the underground gladiator circuit and selling bootleg drugs that undercut the government’s own brand,” Folger says. “Now John is developing uncanny psychic powers that allow him to bypass the state’s tech and tap into ancient knowledge. As he sets out to dismantle the machines that run his world, he’ll come to a completely new understanding of the concept of civilization.”

Sounds pretty freaking great, not gonna lie. And as our own Bill Watters says to Dan Folger on the most recent episode of Nerdbot Talks, “Brooklyn Gladiator #1” is almost darker than Judge Dredd.

Folger says he’s been kicking around the idea of this comic for several years, really sitting down to write it in 2016 following the events of a certain election. He’s using his time wisely right now, using the quarantine to focus on his numerous projects (stories, animated films, and oh yeah- Brooklyn Gladiator).

You can watch our exclusive interview with Dan below.

But really, we’re absolutely thrilled for Dan, and so is Heavy Metal.

“Dan Fogler’s stories are balls of crazy, emotional, wild, intelligent, futuristic and frightening tales all wrapped into one glorious narrative. The ability to weave current events into science fiction flows easily on every page Dan touches. I cannot wait for the world to dive deeper into this creative’s incredible mind and I am honored to have the right to publish his works” says Chief Executive Officer at Heavy Metal, Matthew Medney.

David Erwin, Publisher and Chief Creative Overlord at Heavy Metal says: “When I first saw Dan Fogler and Simon Bisley names on the same title, I knew it was going to be one hell of a ride like nothing before.”

“BROOKLYN GLADIATOR is our future, FISHKILL is our present and eventually we will present THE CHRONICLES of RAH which is our distant past,” Folger says of the three titles in his The Last Storm shared universe.

You can check out the cover and information for the first issue below:

You can pre-order your copy of issue #1 here. The title is expected to ship July 1st 2020.