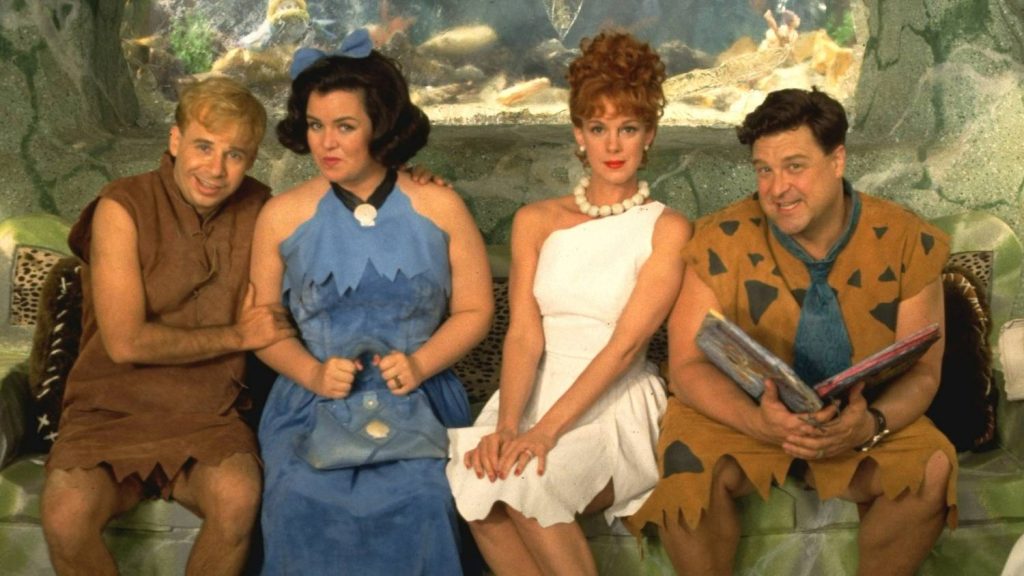 Kicking off the summer 26 years ago was none other than “The Flintstones” movie. Premiering in theaters May 25th, 1994 and Starring my favorite TV dad John Goodman (Fred), Elizabeth Perkins (Wilma), my other favorite dad Rick Moranis (Barney), and Rosie O’Donnel (Betty) as the main cast it was hard not to love the movie. Other characters were played by notable names such as Elizabeth Taylor (Pearl Slaghorn), Haley Barry (Sharon Stone) and Kyle Maclaughlan (Cliff Vandercave).

I wish I could tell you I needed Google to tell me all these names but alas, The Flintstones movie just stuck with me. And my head now contains knowledge about it useful to no one.

Besides the amazing comedy in the film and great performances from Goodman, Moranis, O’Donnel and the rest the movie was one that stayed with me. It was most definitely because it was one of the first movies where I knew almost all of the character actors. “The Flintstones” was very colorful and even if you’ve only seen it once or twice odds are you remember it vividly.

Despite the film being so silly it made 341.6 million on a budget of 45 million. It was a MAJOR hit with families everywhere, and one of those rare times that my entire family would go to the theater.

The toys are probably what I remember the most only because we went to McDonald’s so much that summer that we got tons of doubles of the Flintstones buildings. My mom used to do this thing where she would keep the bags and wrappers and try to fake us out like she had gone to McDonald’s but would really just cook. We always knew she was lying but at least she put the toys in the bag too. So it was all in good fun. 9/10 times though, it was the same exact Flintstone toy with the stickers that we would put on over and over again. I can tell you exactly which one we had a million dupes of. It was the Flintstone house that came with Wilma.

And would you believe that it was also some of the first collectible cups that we got as a family? I wish I could tell you I found this next picture online but I actually just took it now. Because yes.. I still have the cup in my cupboard. They were cute and crystal like Glass cups that said “The Flintstones” and “RocDonalds” which was also advertised in the film.

I’m not sure if it was the timing of it all, or just that it was a sillier time in my life but “The Flintstones” movie had a big impact on us. I think that was the same year that my parents were Fred and Wilma for Halloween. I wish I had that picture to show you and if I ever find it I will update this. But it just goes to show how much of an impact had on families. Or at least mine.