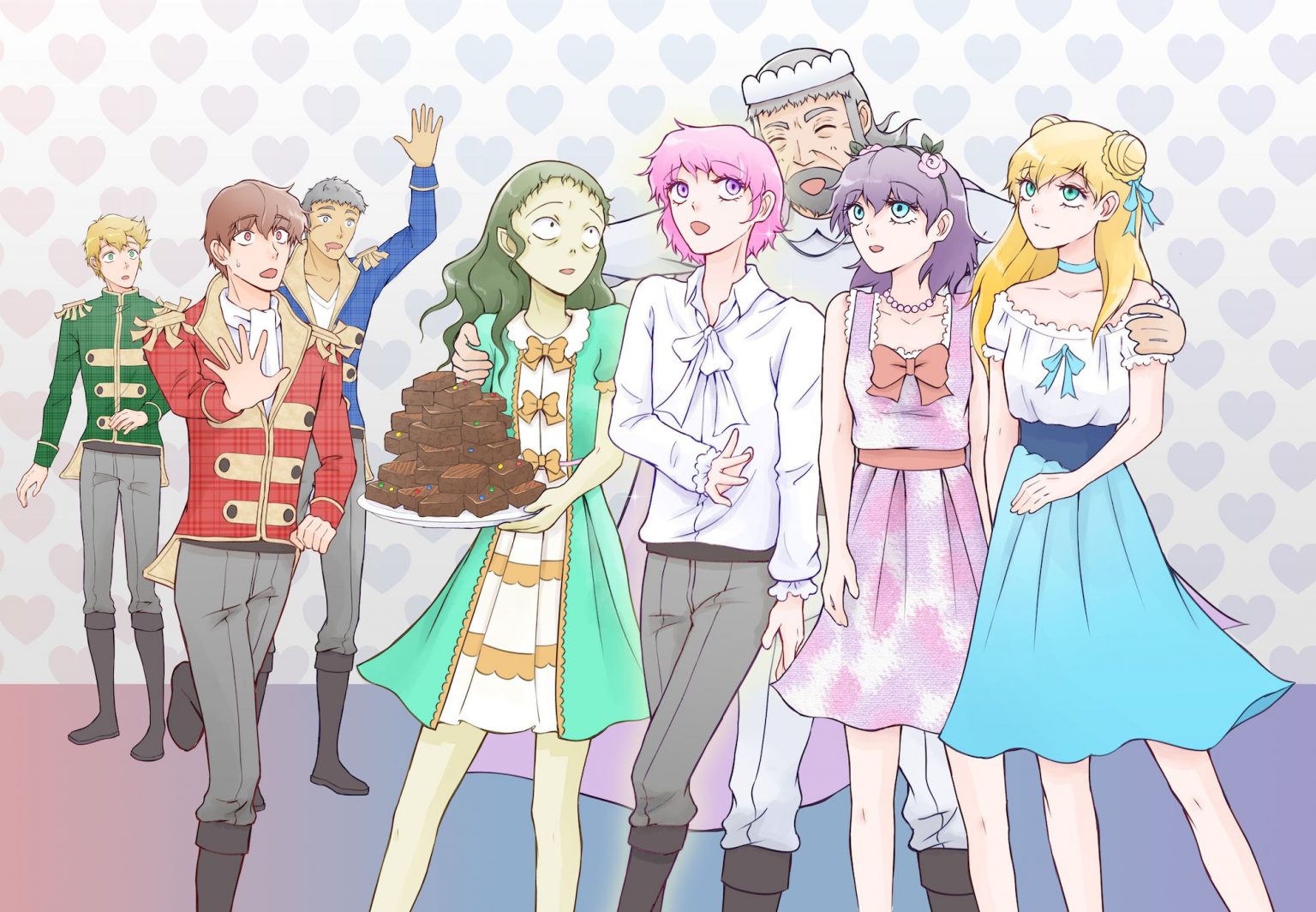 When we started with Cursed Princess Club we followed a story about Gwen. A seemingly cursed princess who was born with two beautiful sisters and a beautiful brother. She meets a group of people called the “Cursed Princess Club” and starts to hang out there often. Struggling to find herself beautiful while others are instantly drawn to her kindness and gentle mannerisms. And though she doesn’t see it herself she is in fact a very beautiful person, even if that’s in a non traditional sense of the word.

Now as we head into season 3 there are many questions to be answered. But most of all we want to know how the character development will continue. In season two there were many things that were touched on such as Prez’s back story. We also got a glimpse into what Frederick’s life is like behind the scenes and why he acted the way he did when he first met Gwen.

The way Lambcat writes her characters it’s really hard to dislike any of them, even when they are acting snobby. Cursed Princess Club is one of Webtoon‘s biggest hits and is sure to win over your heart if you start reading it. If you haven’t please start! And if you are all caught up with the story and would like some hints about season 3, then we’ve got a great interview for you down below! If you’re not and need a little more convincing to start reading, check out our first interview with LambCat and get to know a little more about the main cast.

So much development happened in Season Two and I’m so curious to know what you have planned for Season Three! I’m really excited for when it comes out. Can you give me the date we should expect the first new episode?

Thank you, I’m very excited for it to come out too!! 😀  June 1st is the day season three is scheduled to start on WEBTOON!

I don’t want to be too spoilery for those that haven’t read season two but can you tell us a little more about Prez? I’m hopeful that someday she will reunite with her long lost love. Is there more to that story coming in the future?

I was slightly worried that not many people were going to care to make it through Prez’s backstory, but thankfully that didn’t seem to be the case! It was important to me to properly establish her past and the people from it because there will be some reunions that play an integral part to not just Prez’s story, but the overall story as well.

Additionally, towards the end of season 2, we saw some vulnerable sides to Prez, but also a side to her leadership of the Cursed Princess Club that is questionably harsh and unsparing. That will get explored a little more in this season as well.

I didn’t expect Frederick to be so deep! It was refreshing to know that he had some issues in his past and wasn’t just a snob. What more do you have planned for him? Can you let us in on it?

I was also really glad (and intrigued!) to see the split of people that have compassion for Frederick vs. those who are not so forgiving of him and what he did to Gwen. Either way, it’s clear he still has some internal things to work through. One of the main plotlines of this season will be a transformative journey that Frederick will undertake, but… it’s not a smooth journey, so I hope readers will be up for the trip…!

Gwen is such a sweet character and it’s nice that others are finally coming around to it. By others I mean Frederick of course. Do you think he feels anxious over the new rival he found at the party? Who is that guy? I have a feeling we should be weary of him.

Haha yes, Frederick doesn’t yet know that Lord Leopold has arrived at the Pastel Palace. though he will soon find out. I think that Frederick does feel anxious, but at this point, it’s less about a romantic rival, and more about how and why he struggles to realize what he wants at all. As for what Leopold’s doing there, that will be one of the first things addressed when CPC returns! 🙂

Are there any Easter Eggs we should be looking out for?

Hmm, I do continue to sink too much time into thinking of dumb, sometimes fairytale-related puns for writings on books, cards, etc. (such as in season 2 when Lorena was “reading” her math book titled “Fee-Fi-Fo-Functional Algebra”).

How has your work been coming along now that COVID-19 is impacting so many people. Has it changed up any part of your routine?

At first, I definitely felt pressure as a creator to make sure I come back from hiatus as quickly as possible, as I feel so incredibly lucky and grateful that the entire WEBTOON team has been  working hard to keep the platform running smoothly for all its creators and readers.

But I also did actually get a little sick for a while over hiatus (though I’m not sure if it was… you know, THE virus), so it made me realize that I also need to expand the CPC team and maybe put a cap on how hard we all push ourselves each week. I still don’t think I have a good balance figured out yet, but getting to work with amazing art assistants each week is a huge mental and physical relief…!

What do you think people will enjoy most about this new season?

In the last episode of season 2, a few members of the Cursed Princess Club pondered whether Gwen was cursed or not. I think readers may enjoy it as the CPC slowly figures out how to learn more and more about Gwen and some secrets about her family. By the end of this season, there will be some big answers to some questions that people may have been pondering since the first episode.

Do you have an ending in mind? Or will this be an ongoing series? Have you planned out any other seasons at this point?

I do have the ending planned! I have always envisioned for Cursed Princess Club to be a fairy tale in 4 acts / seasons, so we’re officially about to begin the second half of it with season 3 (though the way it tends to be going, each season seems to get slightly longer…). Thanks to everyone who’s willing to jump back into the story with us — we’ll see you very soon!

How can we follow you on social media? (Link everything you want followed)

You can follow me on Instagram and Twitter at @iamlambcat. I’m not very present there though because social media really overwhelms me! If you’d like to support me or download the music I make for my comic, you can find me on Patreon at @iamlambcat. And of course, please read Cursed Princess Club along with many other brilliant and gorgeous comics on WEBTOON!

Cursed Princess Club comes out with a new episode every Monday and Season 3 starts June 1st. Click here to start reading and let your adventure begin!