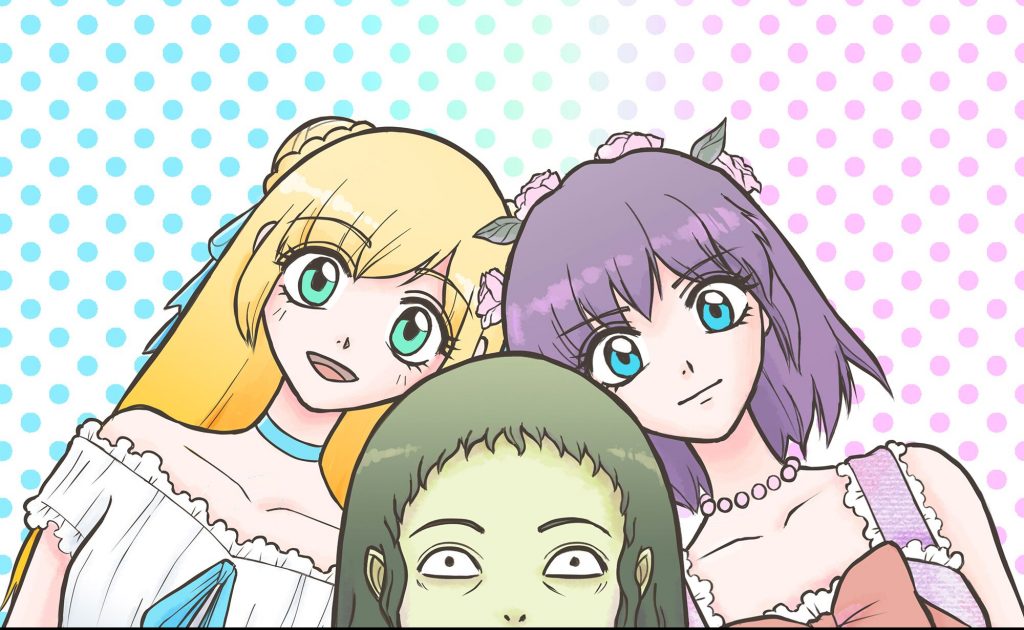 Interview with LambCat the Creator of the “Cursed Princess Club”

Liking it so much I wanted to share it with Nerdbot readers because I really think that this is a story that everyone will appreciate. I caught up with IamLambCat, the creator for the series and got to ask them a few questions about the creation and story for The Cursed Princess Club.

When did you first get the idea for Cursed Princess Club?

I came up with Cursed Princess Club a little over a year ago for a contest that WEBTOON was holding for new creators (I had been a huge fan of WEBTOON but had never tried making one).

I liked the idea of creating a comedy centered around fairy tales because while the very word “fairy tale” connotes this image of true love and happiness, I think we’re all also simultaneously aware of how twisted and frightening many of these tales are. …And I think the intersection of those two concepts makes a great breeding ground for comedy!

So when I was thinking up variations on these themes, I started imagining a world where fairytales were simply just the success stories of people with these curses, and there were actually many princesses-in-distress who didn’t get saved by Prince Charming or weren’t able to lift their curse successfully. What happens to them? And can they still create their own happily-ever-after? That was when the concept of the Cursed Princess Club was born!

Can you tell us more about Gwendolyn?

Gwendolyn is a play on the trope where the female protagonist is ridiculed or ignored for the way she looks, but then suddenly becomes loved by everyone when she does become conventionally attractive. Gwendolyn, on the other hand, does not look conventionally attractive (she is later often mistaken by outsiders to be a witch or other supernatural creature), but has so far been loved and adored for exactly who she is her whole life. Well, that is until she meets her arranged fiance from a different kingdom who does not see her in the same light. Without saying too much more, I hope that Gwendolyn and her journey can help remind people that outward looks are just a small fraction of what makes someone lovely.

The father is so funny! I love his character, is he modeled after anyone?

I’m so glad you like him and that he seems to be a loved character among readers! I can’t think of anyone specifically that he’s modeled after, but he’s definitely similar to the overprotective fathers you see in many stories! But on top of that, I also kind of just wanted to design the most loving father possible. Like, even though he’s the ruler of a kingdom, his favorite things to do are to personally walk to each of his children’s rooms every day to say good morning, or to have board game nights with them. I feel like the most loving acts are often the small ones that don’t cost anything.

Were Gwendolyn’s siblings modeled after anyone?

Yes! In the first episode, Gwendolyn’s siblings are introduced one by one as the father visits their rooms, leading up to the reveal of Gwendolyn. And to best contrast Gwendolyn’s features, her siblings were designed to look like very stereotypical 90’s shoujo anime girls.

The siblings are each so beautiful to some hyperbolic, comical degree that is sometimes found in fairy tales. For example, the eldest daughter Maria is modeled after Cinderella, being so beautiful that animals do her hair every morning.

Do you think that Frederick will ever find Gwendolyn attractive? What’s his deal anyway?

I’m afraid I cannot say anything to this point! 🙂  But I will say that in the second season, we will be learning more about Frederick and why he does what he does. Whether that merits readers’ compassion towards him is another thing though!

Was it always an idea to compliment each episode with a music track? (I have to say it really does set the mood)

Yes!! I adore anime, movies, and games with a soundtrack that brings extra life to the story, and I love attempting to do that each week! I have a lot more experience making music than comics, so it’s the part of the creative process that I feel the most comfortable with. I don’t have much time to make more than a 1-2 minute groove that loops, but I’m very happy when I hear that it adds something for readers!

When will Season Two start? Can you give us a clue on what we can expect?

Season two will actually begin right after season one with no break! …It may be a decision that I personally regret later, but there are just too many questions that season one has set up, and I feel like I should probably get right to answering some of them!

In season 2, things get more melancholy as opposed to this first season. But if they can power through, readers will learn about things such as: what’s happening to Gwen, some backstories of characters such as Frederick and Prez (the leader of the Cursed Princess Club), and what’s in the barn!

Are you working on anything else right now?

Ah, no. I am quite literally working on nothing else but Cursed Princess Club in my life, haha. It’s an intense schedule to keep up with every week, even though I make a significantly shorter comic than most of the other, far more amazing creators on WEBTOON! But I sometimes briefly allow myself to fantasize about the next story I’ll make after Cursed Princess Club. There’s always some bizarre ideas floating up there, with a soundtrack to match.

How can we follow you on social media? (Link everything you want followed)

You can follow me on Instagram and Twitter at @iamlambcat. I’m not very present there though because social media really overwhelms me! If you’d like to support me or download the music I make for my comic, you can find me on Patreon at @iamlambcat. And of course, please read Cursed Princess Club along with many other brilliant and gorgeous comics on WEBTOON!

Cursed Princess Club comes out with a new episode every Monday, so check it out if you haven’t already and let the adventure begin!