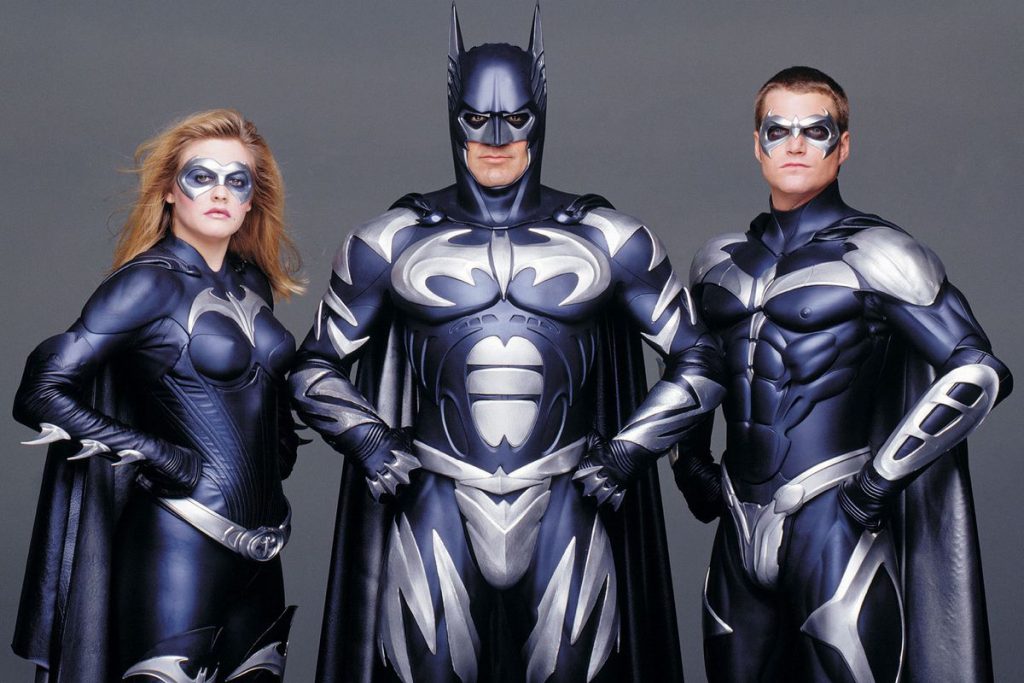 About Time SOMEBODY Apologizes for “Batman & Robin”

Maybe nipples on the Batsuit are your thing, we’re not here to judge- but we can all agree that 1995’s “Batman Forever” and 1997’s “Batman & Robin” are not a good films, right? But clearly, one of these is worse than the other. The 90s brought us a….special take on Batman, and we really think it’s high time someone apologizes to us for it.

Enter one Joel Schumacher, director of both films. About two years ago, Schumacher did a phone interview with VICE, and started the process with a long-due apology:

“Look, I apologize,” Schumacher said. “I want to apologize to every fan that was disappointed because I think I owe them that. After Batman & Robin, I was scum. It was like I had murdered a baby.”

VICE, bless them, had the brilliant idea to continue, asking Schumacher if the true failure of the film (as we’ve all long suspected), could be chalked up to ego.

VICE: So all the decisions that went into the sequel, and the mere fact that you had a sequel at all, was somewhat due to ego on your part?

Schumacher: “Of course! Now I don’t think so completely, the box office was in search of its next hit movie financially so there was pressure. Look, I’m a very big boy. I take full responsibility. I walked into it with my eyes open and what I really feel bad about is the crew. We all know how great movie crews are. The special effects, stunt people, and everybody that breaks their asses along with the cast. Everybody worked really hard under very long hours. So I feel like their work wasn’t acknowledged like it could have been.“

Yeah, we’ll agree with that sentiment about the crew.

Not to be outdone, just this week writer Akiva Goldsman also apologized for his part in penning the script for “Batman & Robin.” While speaking with Collider, Goldsman admits to a certain level of denial from seeing the early reels of the film:

“As for Batman & Robin, that one just confused me. I mean, we didn’t mean for it to be bad. I swear, nobody was like, ‘This will be bad.’ We were really thinking… I mean, here’s the irony: There was a reel that was put together halfway through [filming] where it actually looked dark in an interesting way. It just is what it is and I’m sorry. I think we’re all sorry.”

He went on to further describe the process of movie-making a a kind of magic and science, alchemy:

“It is alchemy. I always used to say it’s like painting by lightning. It’s like a mural that you’re painting and every time the lightning flashes, you paint, and then the sun rises and you’re like, ‘Ooh!’ or ‘Oh, god.’ It’s magic. Obviously, if it were predictable, if it were manageable in any real way, then we’d only make good movies. […] That is the terror and the joy of it because you don’t work any less hard on the ones that don’t land.”

But Goldsman does say that his work on DC Universe series “Titans” is in part an apology, citing his deep love of comics and the source material:

“You know, it’s complicated because I think, in a funny way, this show that Geoff Johns and I created, Titans, is kind of my apology tour for Batman & Robin because it was heady and extraordinary. I’m a deep, deep, deep, deep old comic book fan and so, the opportunity to get to them and to play in them was amazing. And, as you said, it was a different time; things that did last, you really wish had [lasted].”

Not to be outdone, one other key part of the “Batman & Robin” puzzle has also offered words of regret for his part in the resulting cinematic embarrassment: George Clooney himself.

In an interview with The Hollywood Reporter, Clooney (who apparently “warned Ben Affleck not to play Batman”) said:

“[Arnold] Schwarzenegger was paid, I think, $25 million for that, which was like 20 times more than I was paid for it, and, you know, we never even worked together! We worked together one day. But I took all the heat. Now, fair deal; I was playing Batman and I wasn’t good in it, and it wasn’t a good film, but what I learned from that failure was, I had to rethink how I was working. Because now I wasn’t just an actor getting a role, I was being held responsible for the film itself.”

Needless to say, we’re extremely curious to see how Matt Reeves upcoming “The Batman” will tackle the newest take on the Dark Knight, with Robert Pattinson wearing the cowl.