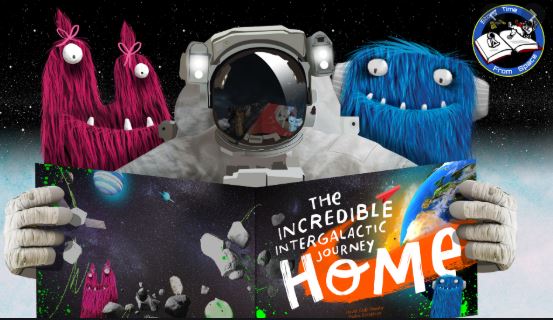 These Books Are Out of This World! Stories Read to You from Space

With schools closed and a lot of us social distancing by staying at home, reading has become one popular way to pass the time. Reading bedtime stories is a good way to both entertain and connect, as well as take our minds off our troubles in these trying times.

As we have increasingly turned to technology to keep us connected when we can’t physically interact, a number of celebrities have pitched in by reading books online. Dolly Parton and Josh Gad are reading bedtime stories, and various celebrities are reading stories to raise money to feed children who are missing out on school meals. Some classics such as LeVar Burton reading “Goodnight Moon” to Neil Degrasse Tyson and Christopher Walken reading “Where the Wild Things Are” are also getting a second look. Samuel L. Jackson read a book reminding us to Stay the F*ck At Home (NOT a kid’s story).

But maybe the most far-out program that should get a look-see is NASA’s Story Time from Space – in which an astronaut reads a children’s book from the International Space Station. The astronaut’s film themselves reading the books while they float around on the space station (how cool is that!) and the video is uploaded on the Story Time from Space webpage and YouTube.

“What better role models to engage kids in science and to engage them in reading? You’re not only looking and listening to the books, you’re looking around the International Space Station,”  said program co-creator Patricia Tribe, an educator and the former director of education at Space Center Houston. The program’s other creator was astronaut Benjamin Alvin Drew Jr., who read the first book “Max Goes to the Moon”, about the final flight of the space shuttle Discovery. Max the dog really gets around, as he also appears in “Max Goes to Mars”, “Max Goes to Jupiter”, and “Max Goes to the International Space Station” (this last book has a version read in English and a version in Japanese). “Khalifa and Amal Go To Space” is read in Arabic, and “Max Goes To Mars” may be available in Spanish (the site isn’t clear). Other books read include “The Mission to Cataria” and “Mousetronaut (“Mousetronaut Goes to Mars” is an upcoming book). There is also “The Wizard Who Saved The World”, “The Incredible Intergalactic Journey Home”, “Endeavour’s Long Journey”, “Rosie Revere, Engineer”, “Astronaut Annie”, “Ada Twist, Scientist”, “I, Humanity”, “The Next Time You See A Sunset”, and “Notable Notebooks: Scientists and Their Writings”.

Another upcoming book is “The Rhino Who Swallowed A Storm”, which was written by LeVar Burton and Susan Bernardo. The book is a story-within-a-story in which Papa Mouse tells little Mica Mouse, who is scared by a thunderstorm, the story of the Rhino who swallowed a storm, the message of which is that even though bad things happen, the world is full of people who care. Which might be a very timely message. The book is available here.

Only books with accurate STEM information are read, and the astronauts also perform science experiments in the companion series “Science Time in Space”. Topics covered in “Science Time in Space” include Free-fall (including discussion of Newton’s Laws of Motion), Why So Fast (why do astronauts have to go so fast to stay in orbit), and Astronaut Height (free-fall effects on humans). So if you are looking for something educational for the kids (or if you just think science is cool) you can check out some of the videos.

Story Time from Space can be accessed here