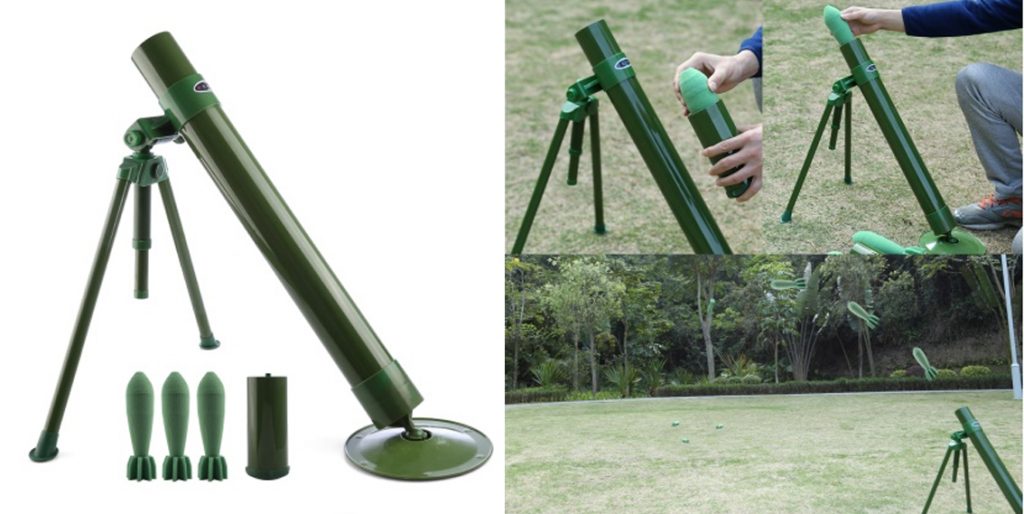 NERF doesn’t hold back when making super awesome foam weaponry for kids and adults alike.  They’ve adapted many realistic and iconic weapon ideas into their toys ranging from all kinds of guns, and have even made bow and arrow sets as well as swords. But now you can up your game by adding one of these foam mortar launchers.

There’s a new aerial weapon in the form of a mortar launcher.  The Army green weapon features three large foam mortars that are spring loaded and dropped into a tube that launches them over the battlefield and into enemy territory.  So not only do the opponents have to worry about the normal battle they would face, they now have to worry about foam missiles raining down upon them from the skies.

The launcher looks just like the ones the green Army Men toys were equipped with back in the day, but looks like it could potentially blend in with the grass in a park or field.  A canister is used to activate the spring in each mortar, and once that’s done, the missile can be loaded into the launcher.  The missiles replicate 60mm caliber bullets, but are of course harmless.  The launcher looks like it can be tilted for different arch ranges with a nice tripod base, and is just the right size.  The toy specifications suggest kids 14 and up can play with the launcher.

Remember that while the name of the product is 60mm Caliber Giant Foam Soft Elastic Transmitter for Nerf CS Battle Tactics – Dark Green its not made by Nerf. Nerf probably couldn’t get this hardcore.

Different sites are selling at different prices, but you can add this weapon to your foam arsenal for around $35 to $38.

Nerdbot does not make anything off the sale of this item, we just thought you would like to know.