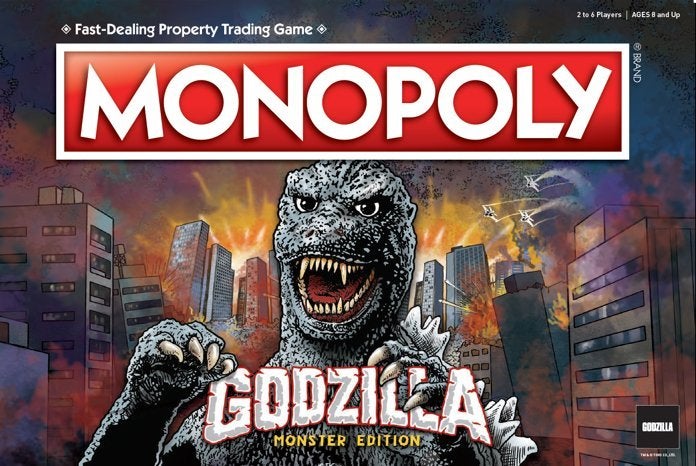 Good news Kaiju fans! There is going to be a version of Jenga and Monopoly that you can get with none other than Godzilla!

USAopoly and Toho International have teamed up to bring us some very cool Godzilla games. The first is Jenga which has a cardbard cut out of godzilla and a building you can dismantle. The trick is you have to try your best to keep the building standing otherwise Godzilla wins!

Secondly we have Monopoly which there aren’t too many details on yet. The official description states:

“Begin the invasion by buying, selling and trading locations like Monster Island, Goro’s Workshop, and Kitakami Lake and take over the board with Facilities and Bases. Custom sculpted tokens of giants such as Mothra, GODZILLA, King Ghidorah, and Mechagodzilla easily impose on anything in their path!”

The player pieces include Godzilla, Mothra, King Ghidorah, Minilla, Mechagodzilla, and Rodan. They haven’t revealed what the board will look like but we do know the other parts of the game are: 28 Title deed cards, 32 Facilities Cards, 16 Bases Cards, 16 UNGCC Cards(chance and community chest), 16 Godzilla tower cards, Kaiju currency and 2 dice. I’m going to go out on a limb and say gameplay has something to do with godzilla not destroying your property.

They haven’t released these for presale yet but your probably looking at around $30 for Jenga and $50 for Monopoly. Keep an eye on the USAopoly Amazon page so you know when it comes out.