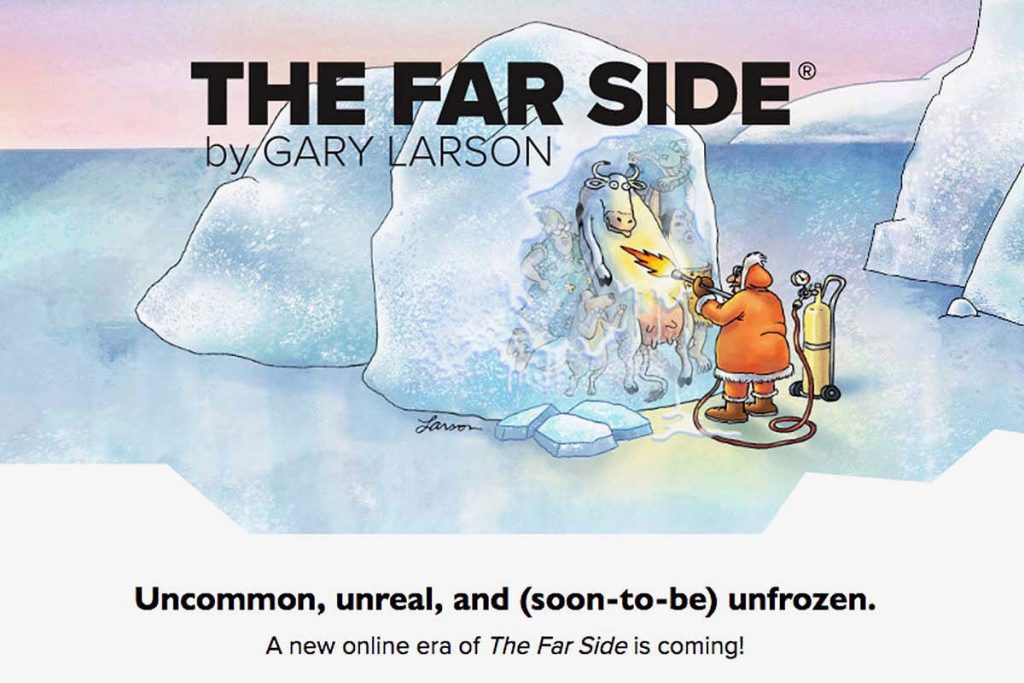 The Far Side Is Officially Back!

1995 was a dark time to be a fan of comic strips. Back in the pre-internet stone age, strips like Peanuts, Garfield and For Better or Worse provided daily light chuckles in the newspaper. However, nothing touched the humor and creativity of both Calvin and Hobbes and The Far Side. They both were the pinnacle of daily comics by being clever and creative on a daily basis. However, the cost of putting out such high quality work took a toll on both of their respective creators. Over the course of 95, both Bill Watterson and Gary Larson retired from the business entirely. Having found tons of success and not willing to run their creations in to the ground, they left with their legacies secure. Their retirements were the end of an era, especially as the internet changed how people read, well, anything.

Both creators were also notorious for not being willing to talk for interviews or be in the public eye. Larson was content with enjoying his privacy and reaping the royalties from Far Side calendars. However, with the internet came relentless reposting where people would share his comics without credit or paying for them. However, Larson hopes to help control his creation once again by launching TheFarSide.com which will also offer brand new cartoons by the creator.

In a letter published on the site, Larson makes it clear that he won’t be going back to the daily grind of making new strips. Instead, he will make intermittent comics on his own schedule that will also take advantage of the advances in computer illustration. However, the biggest reason for returning is that by being an active presence online, he can be the main source for his own work instead of being endlessly shared on your parent’s facebook page.

Right now, the site is mostly just a selection of classic strips though new stuff will be coming starting next year. Another fun element are some of Larson’s sketchbooks which are full of doodles, concepts and jokes that were either rejected or refined. It provides a glimpse into his creative process and is extremely interesting for those curious for how he came up with so many of his bizarre and unique cartoons.

A large part of what comedy looks like these days owes itself to The Far Side. You owe it to yourself to revisit this classic series or dive in for the first time.