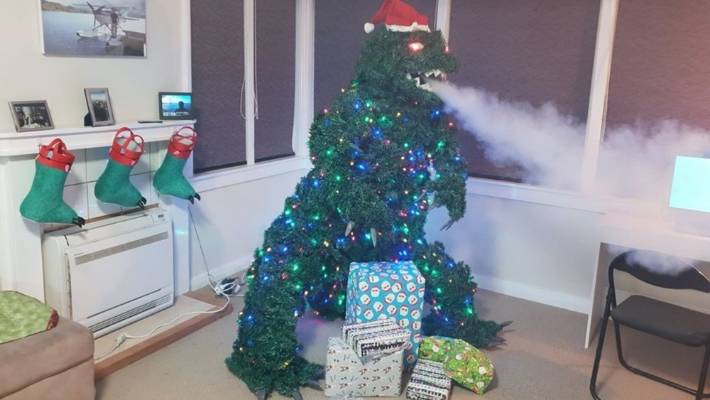 This Godzilla Christmas Tree is Enviable!

Rotorua-based pilot Steven Newland has been making odd Christmas trees for a while now. It started out as a friendly competition between him and his neighbors but after last years Portal Christmas tree where one half was coming out of the ground and the other out of the ceiling most declined to play. This year he has created the ultimate tree for any kaiju lover and had put it up on a service called Trade Me. It has unfortunately been sold but that doesn’t mean we can’t gaze upon it’s magnificence.

Just look at that friendly smile! He is made of plastic tree, paper talons, plastic teeth and eyes that glow red. He also breathes smoke!! Now set that all to an amazing Godzilla soundtrack and you have the tree of the year! If you click on the source link you can watch the video where it shows off how it looks in action.

And of course there is always this version that was featured in a Japanese mall.