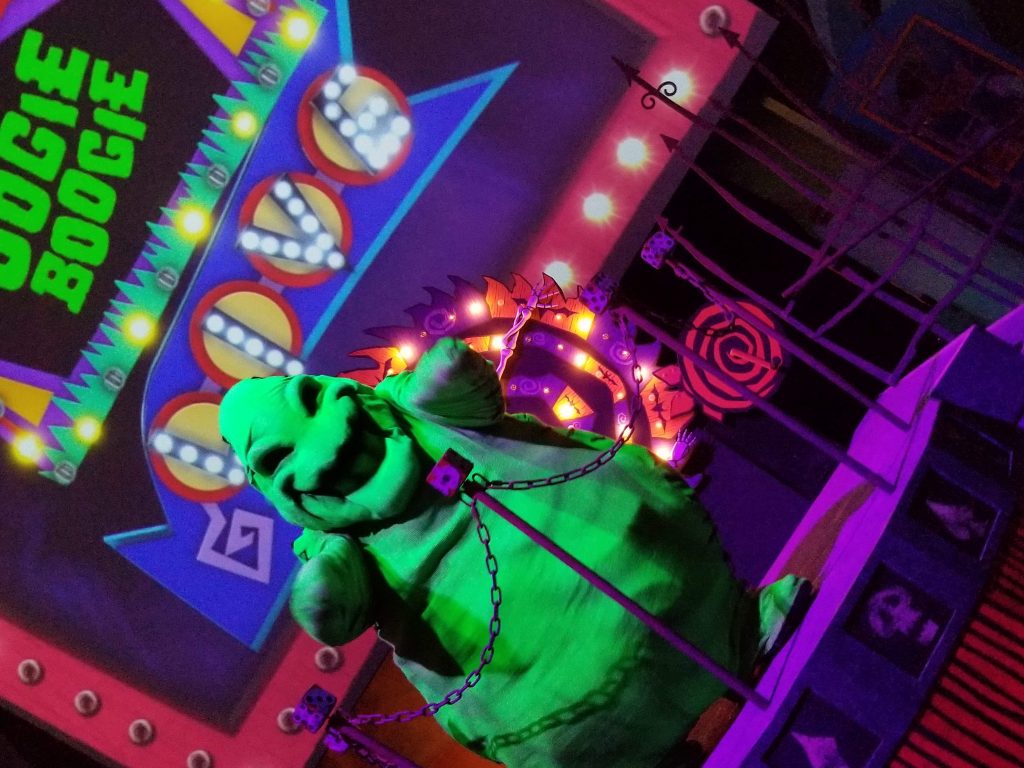 It’s Party Time! A Review of the Oogie Boogie Bash

This year was the first year that Disney decided to shake things up with their West Coast park Halloween party by sending it from Disneyland, over to Disney California Adventure and I gotta say, it was a smart move.

In April, Disney announced the brand new Oogie Boogie Bash hosted by The Nightmare Before Christmas villainous bag of bugs, Oogie Boogie. Tickets sold out almost immediately. Fortunately I somehow managed to get my hands on two tickets for the October 20th party, and this is how it went down:

Every year, Disneyland and Disney California Adventure Parks both get major Halloween makeovers, but this year DCA got a little extra for the Oogie Boogie Bash, in the form of a new projection on Carthay Circle. Everything really so well together to give off a spooky good vibe.

This year had such a great assortment of characters to meet! Whether you’re into video games, Saturday morning cartoons, villains, or classic Disney movies, there is a beloved character that you can meet and get a fun photo with.

Not only did Oogie Boogie Bash have treat trails with several candy stops, but they had immersive treat trails, filled with fog, ambient lighting, and a major Disney villain to interact with. One of my issues with this was that they let me wait in line for the Evil Queen trail, when there was no Evil Queen to be seen. She was gone. Another issue was a lot of the Cast Members were clueless when it came to allergy friendly options. I have a peanut and tree nut allergy, so I do expect Disney to be a little more on top of the allergy friendly options.

The Parade and Shows

Because they moved the party to DCA, they were able to theme an entirely new World of Color around Disney villains. Villainous! is a water show about a little girl named Shelley Marie who can’t decide if she should be a villain, like she truly wants, for Halloween, or a princess, like most other girls will be. I loved the message about being true to yourself, but the story just felt really unnecessary. But, it’s World of Color, so of course, it’s still good.

They also added this really fun dance party, themed around the wildly popular series of Disney villain’s kids movies, Descendants, called the DescenDANCE Party. This dance party was honestly really fun. They teach everyone how to dance, and in between the show with the VKs, they have a DJ that plays fun remixes of 90s and 00s pop hits.

There’s even something fun for the little bitties! This year they added a show called Mickey’s Trick and Treat, which is basically about a Halloween party, and it is super fun for the kiddo crowd.

And, of course, they had the Frightfully Fun Parade, which was pretty much the exact same parade as the one they had at Disneyland, they just moved it over to DCA.

I’m not gonna lie, I did’t get a lot of treats. There was so much to do that I just didn’t have a lot of time to eat. But don’t worry, I did get to try some, and what I did try, I LOVED!

Yep, I saved the best for last! Villains Grove was a dreamlike walkthrough attraction that goes through different villain themed areas. My jaw was hanging open through the whole thing. There are light effects, fog, music, chanting, animated projections… They just really went all out on this place.

I honestly think that the Oogie Boogie Bash is worth the hefty $145 price tag just for Villains Grove, alone, but everything else it has to offer is great as well, so I highly recommend trying to make it to this party. You won’t regret it!