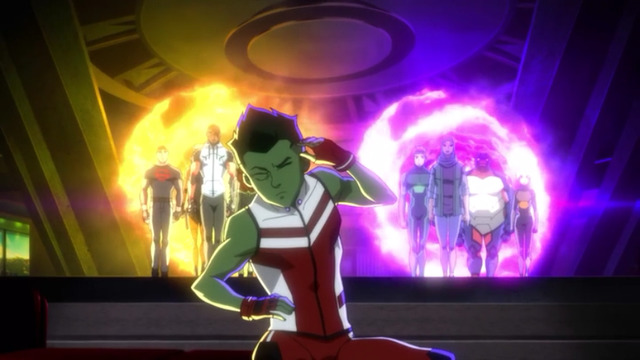 Legion Of SuperHeroes Teased In Finale of Young Justice: Outsiders

Season Three Of Young Justice Ended With Many Possibilities, One of Them Hugmonus

Young Justice : Outsiders released their last three episodes of the season on the 27th, brining the shows first run on the streaming platform to an end.

One of the last scenes of the 26th episode was a private party. Where members of the Justice League / Team have a private party at restaurant in Metropolis.

Friends and family enjoy their time together, cutting between members, where we eventually discover that the waitress at the establishment is wearing a Legion Ring.

While the shot deliberately avoids the waitress face, many fans have begun to speculate on who this might be. With the Legion Getting a New Comic Book later this year and with their recent feature in DCAU’s Justice League v.s. The Fatal Five – the relevance of said characters bodes well for them being feature in the next Season of YG.

While season two ended on a more global event, Outsiders ended its season with a more intimate mindset. Stopping the possibility of a grandiose space battle, to place focus on the fates of the Markov’s , romantic relationships as well as inter-hero relations.

While there are several plot threads left behind, as well as many that are just starting, the Justice League/Team/Outsiders are left in a relatively positive position against the enemies of justice.

It has not been confirmed on whether or not there will be another season of Young Justice, but based on fan response we should be hearing news any day now. The following below is creator Greg Weisman’s Tweet on the subject.

What’s your opinion on this ending ? Are you excited for Young Justice : Legion ? Or is the idea a flop ? Let us know in the comments down below

All New Arrivals on Netflix – September 2019