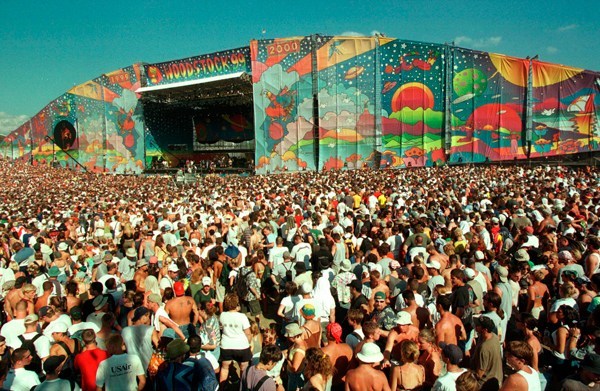 Admit it, you’ve watched at least one video of Jimi Hendrix playing “The Star Spangled Banner” on social media this weekend.

It’s okay… I’ve done it a couple of times too.

Which I’m sure you’ve been able to mentally piece together the fact that this weekend was the 50th Anniversary of a beautiful three days of peace and music disaster known as Woodstock. You know, the thing your grandparents or maybe your parents say they went to but oddly can’t remember any of it.

There have been a few attempts to recreate the magic of the 1969 Woodstock. Even as recently as this year and I wanted to start off by saying when I heard Woodstock 2019 was going to be canceled, a devilishly satisfying smile came across my face. Why? Because I absolutely hate the fact this staple event of music history has been warped into some ceremonial brand, resurfacing every twenty five years like a corporatized Pennywise the Clown to feed on the paychecks of live music enthusiasts. And I’m here to trumpet my opinion that the time has come for Woodstock to Rest In Peace… dude.

Seriously, please stop even trying to have another Woodstock.

I can offer you two reasons;

The first argument for the festival’s dirt nap is simple, out of the four Woodstocks that have happened, or were supposed to happen, only two of them I’d sort of consider an actual successes, Woodstock 1969 and 1994. Those two actually happened and didn’t have riots. Score! Keep in mind history casts a big shadow over the shear madness which occurred in Bethel, New York fifty years ago. We’re talking mass overcrowding, rain, food shortages, overflowing toilets, more rain, a worse than LA traffic jam getting into the place, lack of supplies, and rain. Sure, when you cherry pick positives from the original you’ll probably think of things like the aforementioned Hendrix performance, free granola, 1960’s weed prices. But realistically the first Woodstock was a logistical nightmare. The days surrounding the event seemed to resemble more of a post-apocalyptic zombie survival series than a gathering to celebrate music and culture.

However, underneath all that hysteria, lies some of the most truly iconic moments in all of music’s existence. Almost too iconic for me to completely disregard the original because I cannot deny its impact on our culture and significance to the 1960’s. Out of all the Woodstocks, the first one seems to be the most authentic, the most real, the festival of the franchise which truly captured what I’ve always felt live music should be about.

Then corporate America comes along with a fresh set of sponsors and MTV doing a live broadcast from the site of Woodstock 1994. By this point the heart and soul of our grandparents or parents three day acid trip was sucked out and replaced by a mega concert money making machine. It rained… again… and I’m sure tragedy struck in certain regards but for the most part Woodstock 1994 was well received by the general populous. Aside from weather, the festival was a little more organized than before which gave some, some relief to the problems the first one faced. Everything went okay enough that someone thought it would be a good idea to try another Woodstock five years later. Spoiler Alert: it wasn’t.

Before I get into the falling action of this piece, I’ll confess… Woodstock 1994 holds a special nostalgic place in my heart. A few of my all time favorite live performances I’ve never been to took place on those stages. Green Day in the mud, Nine Inch Nails in the mud, Primus playing “My Name Is Mud”, dude there was a ton of mud. But for us elder millennial music lovers, what took place twenty five years ago bears a similar significance for a different generation to what took place twenty five years before.

I actually still listen to many of the bands that played Woodstock 1994, except Aerosmith.

Unfortunately any credibility or success garnered by the 1994 Woodstock, it was immediately destroyed by the 1999 installment. You remember this shit right?Fires, which on the nosely started after the Red Hot Chili Peppers covered Hendrix’s “Fire” became the time signature of a weekend gone horribly wrong. The festivities drained the crowd through expensive AF drinks and food. Awful conditions added extra stress to the mix and eventually everyone just… snapped. You know the story.

This nightmare ultimately, and appropriately devastated the Woodstock brand. Remember, it’s a brand by this point in time. Things are so tarnished other every five year attempts to resurrect Woodstock failed. Again, appropriately. Even like six months ago, people thought society’s love of every five year anniversaries, especially the fiftieth one, would be an easy way to score a quick buck. They were wrong, waaaay wrong, and everything beautifully blew up in their faces.

The second argument for Woodstock’s Viking Funeral is also quite simple; there are so many damn music festivals now, we don’t need another one trying to be a major player in this game. What is Woodstock going to do that Coachella or Austin City Limits isn’t going to do? It’s like all these events are in a veritable size war with one another and unfortunately there’s no space left in the measuring room for another weekend music experience.

Why should anyone go to another Woodstock? If you’re reading this, there’s a solid chance a music festival happed or is happening within a two hour drive of your house. Los Angeles has like two music festivals every weekend in the summer, I’ve been trying not to go broke.

Woodstock was for our grandparents. Our generation has their own version of Woodstock to cling on to. Lollapalooza. Outside Lands. Riot Fest (most underrated festival in the country). Woodstock is like the Starter Jacket of the festival industry. Popular at one point, major piece of fashion history, but people simply wear other stuff now. So let’s quit it with the Woodstocks. In 2019, or in the future, having another Woodstock would be a cheap nostalgia play to an age group with absolutely no nostalgic connection to the original.

While I’m okay with smaller shows commemorating the festival’s legacy happening until the end of humanity. Hell, make all the documentaries and YouTube videos you want about it. Deep fake Bill Hader as Joe Cocker singing the song from The Wonder Years. I’ll check that shit out. But when we’re talking the large scale, three day musical and drug induced experience, it’s time to let Woodstock Rest In Peace… dude.

Is it time to let Woodstock die? Let Nerdbot know in the comments!!