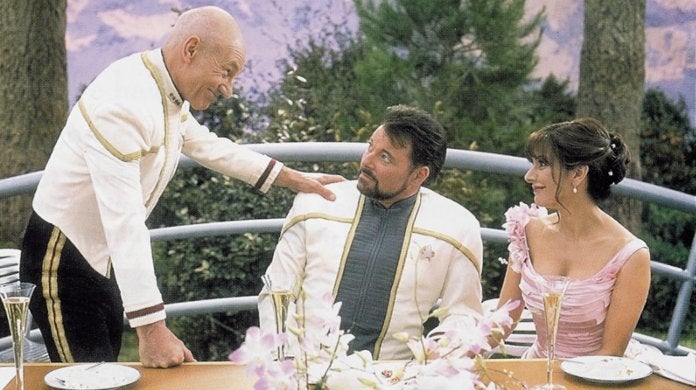 Riker and Troi are still “Together” in Picard Series

One of the things from the Next Generation that I enjoyed watching most was the on screen chemistry between Riker and Deanna Troi. In Star Trek: Nemesis the two married and left the Enterprise to captain The Titan. Now they are both reuniting and making an appearance on Picard’s new show.

Jonathan Frakes told IGN he was nervous about returning.

“I was nervous! I hadn’t done it for…Nemesis was what? 17 years, 18 years ago? Luckily it was with my old pal, and I had just directed two episodes of the show. So I did it with Patrick who is just.. He’s crushing it on this series. He’s just on fire. The trailer’s awesome.

Frakes also confirmed that the couple, Troi and Riker are still together since they married in the show. Only this time it’s not in a Starfleet capacity. Or at least that is what he hints at, much like Jean-Luc Picard it appears that the couple has left Starfleet behind and have maybe retired from that life.

“Yeah, the stuff is great. I can’t obviously tell you, but Marina and I.. Well, you’ll see where we are. We’re together, and it’s quite.. it’s non-military. I’ll say that.”

From the sound of it I would guess that the two started a family and left the military life. Relocating to Earth for a devoted family life.

Along with Frakes and Sirtis we know that Brent Spiner is returning as Data as well as Jeri Ryan as Seven of Nine. The other cast that we are predicting make an appearance are Lavar Burton as Geordi LaForge and Whoopi Goldberg as Guinan.

What do you think about the show so far? Are you excited to see Picard again? Tell us in the comments!