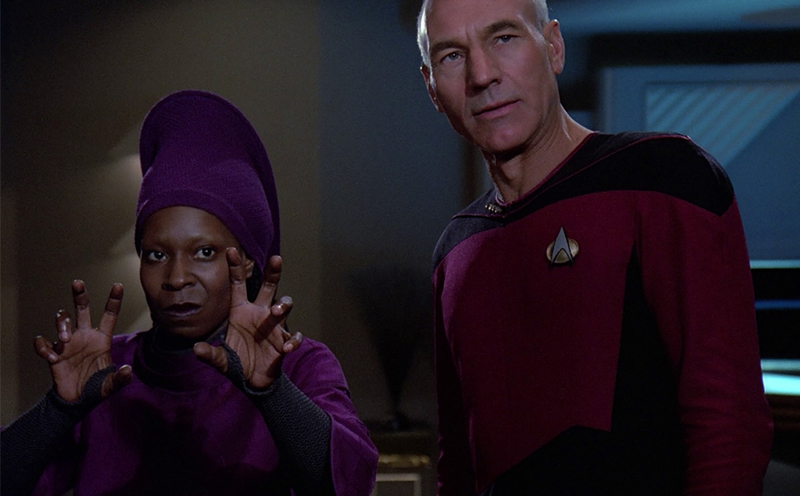 As we continue to edge closer to the return of captain Picard on CBS All Access, one long time actor has expressed an interest to come back as well. Whoopi Goldberg talked about wanting to come back to the franchise on a podcast with David Tennant. While she says that she has not been approached for the new series, she is more than willing to make time to be apart of the show.

Tennant: You could presumably go back to Star Trek. Patrick Stewart is back at it.

Goldberg: I know, but, you know, they have not asked me.

Tennant: You need to ask them again. They would probably think you are kidding.

Goldberg: Well, I don’t know. Maybe. I will. I’ll put it out there.

Tennant: Well, this could be it. We are putting it out there.

Goldberg: All right. We are putting it out there right now.

It is not surprising that Goldberg wants to come back to Star Trek since she has been one of the show’s biggest fans. The reason she ended up as Guinan on the Next Generation was because of that love of the show and wanting to be part of something that had a major impact on her as a child. When she was young, seeing the character Uhura was inspiring since it portrayed an African American woman as a respected and equal part of the crew. Even as Goldberg was becoming a major movie star in the 1980’s, she jumped at the chance at getting a role on television.

On TNG, Guinan and Jean-Luc have a long and deeply personal history together. Guinan was the ships bartender at the personal request of Picard in order to give her a reason to be on board. Their friendship was left a mystery on TNG and that hanging plot thread could have a lot of dramatic potential on a show focused on an older Jean-Luc.

Even though she claims the producers of the new series have not approached her yet, her character would make the best fit in joining Picard. She’s an El-Aurian, which are describing as a being a mysterious race with long lives and concealed abilities. While the rest of the Enterprise crew would have moved on in their professional or personal lives, Guinan’s bond with Picard would make her the person most likely to have stayed close to him. Guinan herself says in one episode that their bond went “beyond friendship and beyond family.”Not to mention her connection to other iconic parts of TNG lore like The Q and The Borg which also hinted at much larger conflicts.

As much as I am looking forward to the new show, it would be a bit disappointing to have Picard return only for the show to ignore the unanswered parts of the show’s history. Hopefully the producers of the show take notice in Goldberg’s interest and find a way to bring her back, if only for a few scenes.

Would you like to see Guinan come back? Tell us in the comments!