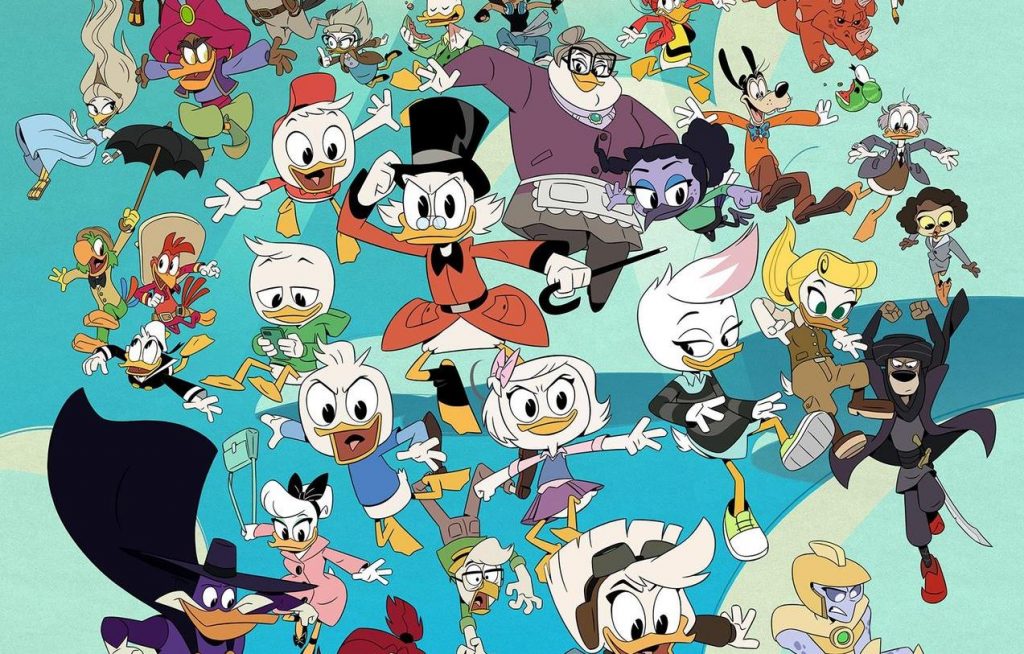 DuckTales Season 3 Brings Back Almost All of The Disney Afternoon

Any fears of a lackluster San Diego Comic-Con for announcements this year has been allayed thanks to some big animation reveals. One of the biggest so far is with the upcoming seasons of the popular DuckTales reboot. To celebrate the show, cast members Bobby Moynihan, Kate Micucci, Ben Schwartz and Paget Brewster took the stage in San Diego. The panel also featured showrunner Matt Youngberg and Producer Frank Angones. A surprise guest that also showed up was Lin-Manuel Miranda who has been playing Gizmoduck on the show.

Over the course of the show’s first season, there have been little references to shows beyond the original DuckTales. The biggest ones have been more recent, such as Dewey and Della singing the classic “Stand Out” from A Goofy Movie. Another big one was the return of Darkwing Duck along with several of his villains on one episode. It seems that the show has done well enough to open the door to bring back a whole slew of characters from the golden age of Disney Animated Television. Basically, DuckTales will be the, ahem, launchpad for all kinds of other characters from the era updated for today.

This poster is, as a 90’s kid, simply glorious. It is a whole cavalcade of characters from almost the entire run of the original Disney Afternoon and beyond. We got new versions of Chip & Dale’s Rescue Rangers, Goof Troop, and TaleSpin. The TaleSpin update is interested since it features grown up versions of Kit Cloudkicker and Molly Cunningham instead of Baloo and Becky. There’s also the return of other DuckTales characters like Bubba Duck and his triceratops, Tootsie. The real obscure ones include a bear with butterfly wings, which looks to be a callback to The Wuzzles, a kind of proto-Disney Afternoon show from 1985. Even Jose and Panchito from The Three Caballeros is in there.

The panel also showcased some more detailed looks of the revived characters updated for the DuckTales style. Chip and Dale look exactly like they should with only minor tweaks to their features to fit the more angular animation of the new series. Goofy also looks pitch perfect to his Goof Troop incarnation, though Max has yet to be featured or announced. The art comes courtesy of Entertainment Weekly who got the first scoop on the official pictures.

While I have enjoyed what I have seen of the series since its debut in 2017, I will admit that I haven’t kept up with it the whole time. With this reveal I have to say that I realize that I am missing out on a show that seems to have grown even more to appeal to nostalgia nerds like me. The panel and poster is a statement of purpose to fans of all ages that they are not going to be messing around in the upcoming seasons. Characters and shows I have missed for a long time are finally getting their due and I am super excited to see how they will be featured. My only hope is that they bring back my beloved Gummi Bears in one form or another. Either way, I can’t wait to sit in front of a TV with a balogna sandwich and some Hawaiian Punch like I am five years old again.

In the meantime, take a look at Breana’s virtual Disney Afternoon that she set up on the site last year. It will provide the necessary refreshers to get hyped for what DuckTales has in store.