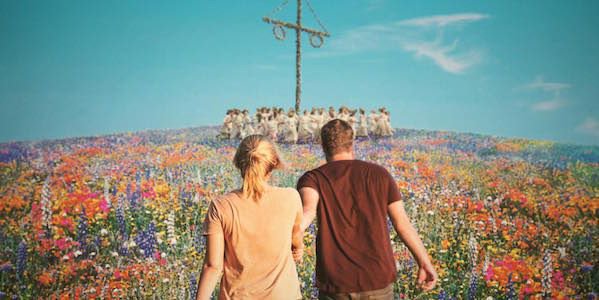 The Psychological Horrors of Midsommar

I just got back from seeing Ari Aster’s new, drug addled psychological horror film, Midsommar, and let me just say, I’ve seen some things. Honestly, I wouldn’t even call Midsommar a horror film. Sure, there’s blood and guts, but there is so much more to this film. But it is definitely psychological.

Major Spoilers from here so if you want to see it first please stop reading.

The film starts off with Dani, played by Florence Pugh, who has just gotten an alarming email from her sister, but is talked out of worrying by her boyfriend, Christian, played by Jack Reynor. Well, this is a mistake, because Dani’s sister winds up killing their parents and herself, which launches Dani into an overwhelming, depressive state. Fast forward several months and Dani has become extremely codependent on Christian and it’s clear that both of them are miserable. So, of course, rather than breaking up, Christian invites Dani on a trip to Sweden with him and his friends, one of which is from the small community they are going to visit and partake in a festival with.

When they arrive, they all decide to kick off their trip (hahaha) by partaking in some shrooms, and Dani, inevitably, has a bad trip. Once she wakes up, they continue on to the small village and things begin to get a little crazy. Things start off innocently enough. We see one of the girls from the village begin to take a liking to Christian, which Dani tries to ignore, but then things take a truly intense turn when the two village elders commit suicide by jumping off a cliff in front of the whole community as part of the festival.

Not surprisingly, everyone in the group is pretty shaken up by this, particularly Dani, but she tries to soldier on through the trip. As she gets more and more involved with the customs of the village and the festival, her friends begin to go missing, one by one, and Christian becomes more and more interested in Maja, the girl who had taking a liking to him.

Dani still continues to try to ignore Christian’s interest in Maja and strange behavior, and is given a hallucinogenic tea before participating in the maypole dancing competition. The more she dances, the more she seems to flourish and brighten up, until she eventually wins and is crowned May Queen. After being crowned, Dani and the community sit down to a feast, and we, the audience, are shown what kind of effects the drugs are having, as the ivy around Dani’s chair moves at her touch and the flowers on her crown appear to breathe. She is then taken to a clearing in a carriage to perform her May Queen duties of watching some of the other women of the community bury some seeds, a steak, and an egg in the ground, while Christian is led by some of the other community members to what appears to be a barn, where he is made to change into some ceremonial garb.

Christian then enters a large room where Maja is naked and waiting for him, surrounded by several other women of the community who are also naked, and of course, they have sex. Once Dani returns, she hears cries of pleasure coming from the barn, and decides to investigate. One of the other women tries to stop her by saying it’s not meant for them, but she goes to look anyway and sees Christian with Maja. This throws Dani into a panic attack, and some of the women come to her aid, helping her to bed and even screaming with her, sympathetically.

Once Christian and Maja are finished, Christian runs out of the barn and finds the remnants of his friends that have gone missing. He’s then incapacitated and put in a wheel chair and wheeled to a gathering for the festival. It is then revealed that Christian’s friend and his brother had brought the outsiders there as sacrifices, and there is one more sacrifice yet to be made. The May Queen has to pick who is to be the last sacrifice, between a member of the community who is picked from a lottery, or Christian. Of course she chooses Christian, who is then stuffed into a disemboweled bear and burnt alive in a temple with the bodies of his friends and two volunteer community members. As the sacrifices are burning, the villagers (cult) go into a frenzy and Dani begins to sob. The movie ends on Dani beginning to smile.

Now, I’m not going to lie, this movie was weird. But not in a bad way. It was weird and beautiful, with lots of floral imagery and a beautiful score. The acting was fine. Florence Pugh was amazing at making you really feel Dani’s grief and heartache. Jack Reynor honestly felt a little stiff as Christian, but he did a good job of making you glad he was burning in that temple. I think my least favorite performance came from Will Poulter as Christian’s friend Mark. He was mostly used as comic relief, which made him seem really out of place in the film.

I really loved the idea of Dani claiming her independence at the end, by burning her emotional crutch that was Christian. The image of her roaming across the screen in her flowered cloak and crown was breathtaking.

All in all, Midsommar was definitely a decent watch and certainly worth checking out.