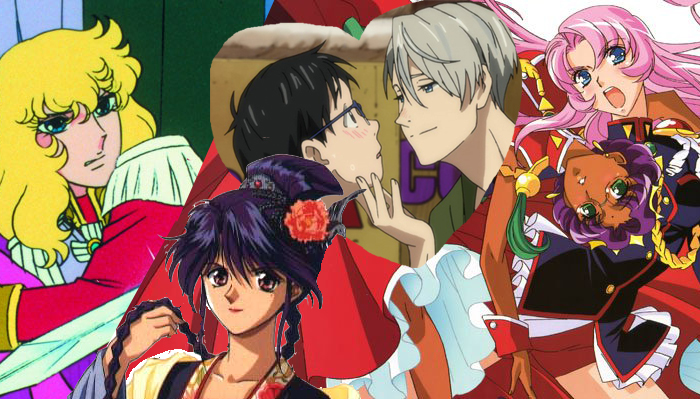 A History of LGBT Representation in Anime

Hi, I’m your friendly neighborhood queer, and I’m here to fill you in on the history of LGBTQIA+ representation in anime!

From the Sixties to the Eighties

It all started way back in 1967 with the series Princess Knight, which was created by the legendary Osamu Tezuka, best known for creating Astro Boy. Princess Knight is about a character named Sapphire who possesses both the heart of a girl and the heart of a boy, who must present as a boy so that she (they use she/her pronouns for Sapphire) may one day inherit the throne of Silverland, as women are not able to rule.

This series went on to inspire the highly influential The Rose of Versailles manga which ran from 1972-1973 and has recently begun an ongoing continuation, and an anime which ran from 1979-1980 and spawned two films. The series takes place in France during the French Revolution and revolves around Marie Antoinette and later, Lady Oscar. This series, in turn, went on to influence one of the most critically acclaimed queer baiting series of all time, Revolutionary Girl Utena.

From the Nineties to the 00’s

Basically, a lot of the older queer anime was about girls with swords who wanted to be prince, and that’s pretty cool. Utena was created by Chiho Saito in 1996, was directed by Kunihiko Ikuhara and featured a pink haired main character (because duh, anime), who is searching for the prince she met after her parents died. That prince inspired her to be a prince, and so she fights duels after winning the hand of Anthy, the Rose Bride. The series is very artistic and stylized and some might say, a little weird. But honestly, it wasn’t ever gay enough. Utena and Anthy only really kiss when Utena draws the Sword of Dios from Anthy’s chest. They do, however, share a passionate kiss at the end of the movie, The Adolescence of Utena.

Now that we’ve brought up Utena, we might as well delve into the 90s, and you can’t talk about 90s anime without mentioning Sailor Moon! Sailor Moon was one of the first anime to give audiences a truly fleshed out gay romance. The Sailor Moon anime, not manga, actually featured two gay pairings, but people only ever like to talk about one, and don’t worry, I’ll get to them, but first I want to talk about Zoisite and Kunzite, because they are criminally underrated.

Zoisite and Kunzite were originally straight men in the manga, and they were two of the four generals under the command of Prince Endymion. They were also each supposed to be suitors to the four inner Sailor Soldiers, Mercury, Mars, Jupiter, and Venus. In the anime, however, they only ever served Queen Beryl, and the two are gay lovers, in addition to being kind of adorable. Of course, when they brought Sailor Moon to the states, they HAD to make Zoisite into a woman, because kids can’t be exposed to *GASP* the gay!!

Which brings us to our next, fan favorite couple of Sailor Moon, Haruka and Michiru, or Sailor Uranus and Sailor Neptune. Yay, the space lesbians are here! (heart eyes emoji) Sailor Uranus and Neptune make up half of the outer Sailor Soldiers and were meant to protect Earth from their place in the outer Solar System. They’re also lovers and had to be censored and portrayed as cousins for American audiences, because again, the gay.

There was a lot that was actually untouched in the 90’s because in America we weren’t quite as accepting of LGBT concepts as we should have been. For instance the original dub of Sailor Moon never touched stars due to not knowing how to handle the concept of the trans characters. You see the Sailor Stars were people or “aliens” that presented as male when they were in their civilian form and when they transformed they turned into females. Part of the reason that they didn’t dub the last season was simply because they didn’t know how to approach it. It’s an amazing season with a lot of deep insights into what it means to be trans. For instance during the last battle when Seiya is trying so hard to keep it together but then Galaxia steps on him with her heel and he let’s out a feminine scream. That moment was one of the most heartbreaking in the series. And we won’t go into what that means for Sailor Moon herself but fan theories have her as pansexual or polyamorous with Tux and Star Fighter and I know people who are definitely for that.

Throughout the 90’s we continued to get heartfelt homosexual characters and relationships, with Fushigi Yugi’s Nuriko, who was initially introduced as a female character, who turned out to be a man. I’m honestly not sure if Nuriko counts as a trans character, because he began to express as male later in the series and actually preferred it. I think that Nuriko presented as female because he thought that would make his attraction to men more acceptable. But then, of course, he was reborn as a girl in the OVA, so who knows?

In 1998 we got a truly touching bit of representation of yaoi, or boys love, in Cardcaptor Sakura with the characters of Touya Kinomoto and Yukito Tsukishiro. It’s clear from the beginning that Touya and Yukito care for each other very deeply, and they are even romantically involved in each of their other incarnations in the giant CLAMP crossover series Tsubasa Reservoir Chronicles.

In the 2000’s LGBT characters were mostly used as comic relief and fan service, but there were a few exceptions.

Ouran High School Host Club featured Haruhi’s dad as a cross dresser and while that isn’t inherently gay because he was with Haruhi’s mom, he shows a gender fluidity that wasn’t really seen in anime at that time. Also while they played it off as silly it was a serious nod to what it means to not identify with gender norms.

Which brings us to Haruhi whose whole existence in the host club was her pretending to be a male host. The best part about Haruhi was that she was so comfortable not complying to gender norms that when Tamaki and the others started to crush on her it was a great step for those who not only question their sexuality but also showed that it is ok to not prefer one gender identity over the other.

In 2004 we saw the beginning of yuri madness with the release of the anime adaptation of Maria-sama ga Miteru. Maria-sama ga Miteru is about two girls who find each other in a catholic school. The story focuses on them and their relationship as one of the most popular girls in school takes Yumi under her wing. While others hail this as one of the best Yuri anime out there I did feel like there was much left to be desired. But for the completionist in me I had to add it to this article. I do truly believe there would not have been a LGBT Renaissance so to say without this series.

In 2006 a series of illustrated short stories written by Sakuraku Kimino were adapted into the anime, Strawberry Panic!. Strawberry Panic has been said to be a parody, simply because literally every single character in the series is a lesbian, but honestly, if that’s the case, I’m fine with it, because the anime is damn beautiful. Strawberry Panic is the love story of Nagisa and Shizuma, and their many challenges at the all girls school they attend. It is somewhat similar to Maria-sama ga Miteru, but it delves more into the sexual relationships between the girls.

The Past Ten Years

In Sakura Trick, Haruka and Yuu are best friends that have just started high school. They’ve always been very close and suddenly find themselves growing apart. They decide on a kissing arrangement, where they are allowed to kiss each other and remain just friends, but they must keep it a secret from their friends. As the series progresses, they slowly realize they are falling for each other, and in the last episode they decide to begin a romantic relationship.

Love Stage!! Now this one is one of our Editor’s favorites. Coming out in 2014, This one is about two boys that were in a commercial at a very young age. When the boys shoot the commercial Izumi is dressed as a cute little girl. So Ryoma Ichigo thinks all this time that he is in love with a girl. Always looking back on that day fondly. It’s not until they do a second commercial with the boys grown up that he finds out that it was Izumi dressed as a girl. He has kind of a panic attack and then accepts that he still loves him. It is about their relationship and the popular star coming out with Izumi. It is one of the best yaoi anime and I highly recommend it.

Yuri On Ice was a breakout hit in 2016. Everything from the theme song to the subject matter was hailed as a great accomplishment. All he wanted to be on that ice was a pork cutlet bowl. And all he wanted in his love life was Viktor. It was a heartwarming story about picking up yourself after you thought you couldn’t go any further. And a beautiful story about when you not only have a relationship but are there working with each other and truly understand one another’s value.

Citrus came out in 2018 and while it is a more current anime with lesbians it is also one of the more controversial. This anime wasn’t afraid to be in your face about these girls.. Discovering themselves, and each other. For some it is considered trashy and pandering but for others who can get past that stuff it is a story about two girls whose parents get married and share a bed and just happen to like to do stuff with one another. Actually typing that out I can totally understand it. Yeah it is trashy, but it’s the type of trash I like to watch.

In what may be the first anime to seriously portray what its like to be transgender, Wandering Son, one of my favorite anime is about Shuichi, a girl who was assigned male at birth. She wears dresses and a wig in private but doesn’t feel comfortable going out with it until she meets Yoshino who is in the opposite situation as her. He is a boy who was assigned female at birth. Wandering Son is amazing in the way that it doesn’t portray trans characters in a comedic way, and it accurately covers the various issues that trans youth go through like puberty and love. Shuichi eventually transitions and writes a memoir, while Yoshino decides not to transition.

Do you have any favorite LGBTQIA+ anime that we missed? Tell us your favorites in the comments! 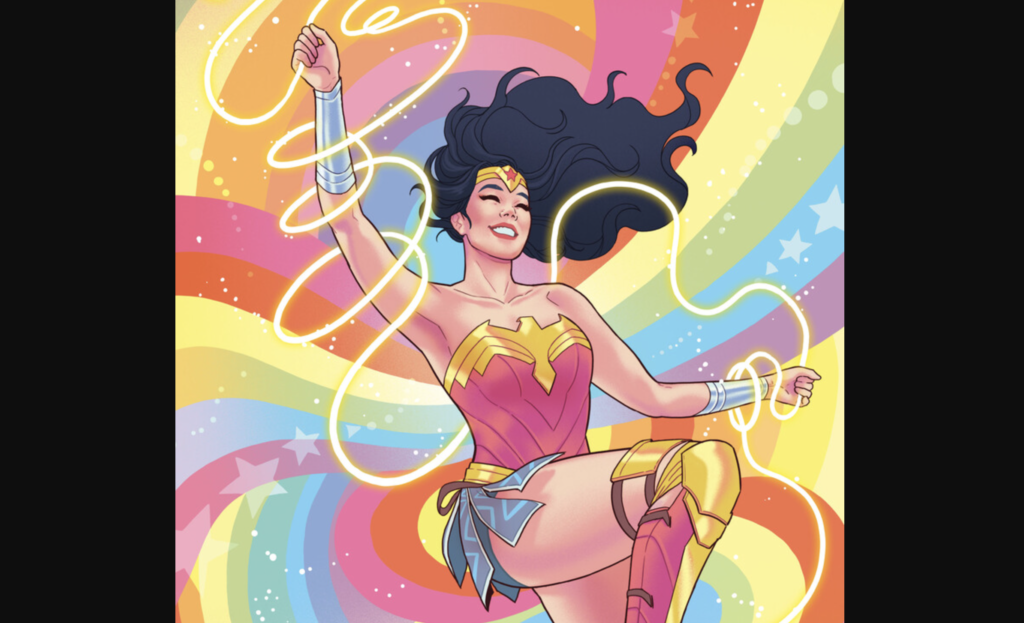