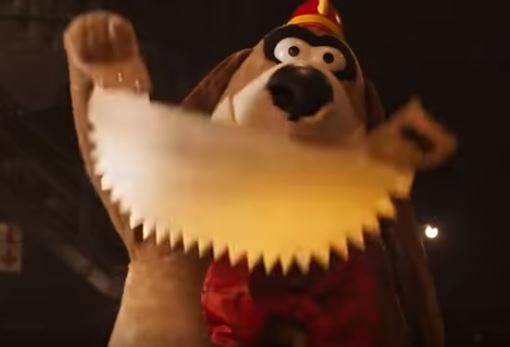 Back in February, we mentioned that the Banana Splits, the crazy band of animals from a popular kids’ show back in the ’60s and ’70s, were going to return in a horror movie. Now we have a trailer for the movie that puts a dark and deadly twist on the characters, who seem to be robots instead of actors in furry suits.

Initially, what we had heard about the plot was that it involved a family that attends a taping of the show to celebrate a young boy’s birthday. But things don’t go as planned.

Now we get a little more info on the story. Apparently, the Banana Split’s show is being canceled, and the band members (Fleagle the Beagle, Drooper the Lion, Snorky the Elephant, and Bingo the Gorilla) aren’t taking the news too well. So poor Harley isn’t going to get the perfect birthday his mother wanted for him, but he will definitely get a birthday to remember (if he survives).

The Banana Splits Movie is rated R for horror violence and gore.

The Banana Splits Movie will appear on SyFy channel (after debuting via Warner Bros. Home Entertainment) later this year.