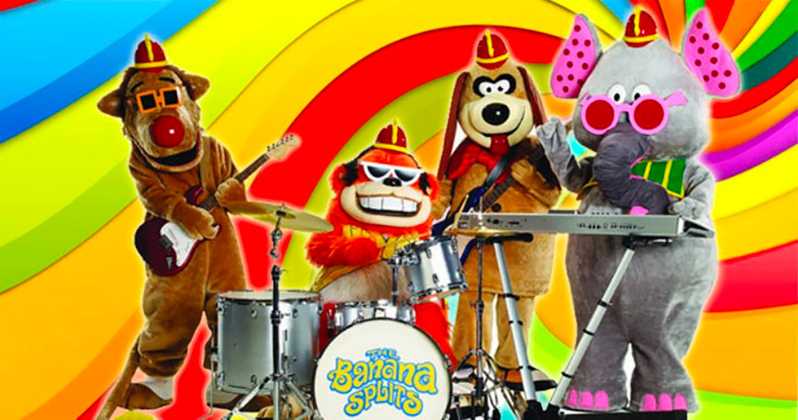 Some of us are old enough to remember watching the Banana Splits Adventure Hour variety show when we were kids. The Banana Splits were actors in furry animal costumes who played in a band reminiscent of the Monkees. The animals were: Fleegle (a dog), Bingo (a gorilla), Drooper (a lion), and Snorky (an elephant). Each episode would have them singing their theme song Tra La La (One Banana, Two Banana) and having a meeting of the Banana Split Club; in addition there were a mixture of animated segments and the serialized live action segment Danger Island. The show ran from 1968-1970 and then in syndication from 1971-1982.

Now it’s making a comeback – but not how you’d think. The Banana Splits will appear in a horror movie on the SyFy channel (after debuting via Warner Bros. Home Entertainment). Yes, that’s right, a horror movie. The plot of the movie involves a boy named Harley who attends a taping of the Banana Splits show with his family to celebrate his birthday. But things take an unexpected turn – and the body count starts rising!

The Banana Split characters should be appearing in the new movie. They were originally created by Sid and Marty Krofft for producer Hanna-Barbera. The Krofft brothers went on to produce their own wacky shows such as H. R. Pufnstuf.