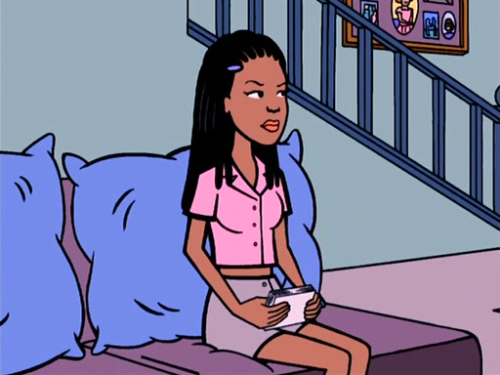 Jodie Landon, one of Daria’s friends in the show is to be getting her own spinoff starring Tracee Ellis Ross. Originally they had intended to call this new show “Daria and Jodie” but instead went with “Jodie”. They are going to show us what it is like for Gen Z(1995-2010) to function as an adult. “Jodie” will center around her as she goes into a post-college world and gets a job at a tech company.

Jodie had many great moments in the original series and was one of the best characters besides Daria and Jane. She is sarcastic and funny and is not afraid to speak her mind. Often saying that Lawndale high lacked diversity she felt pressured to be the perfect example of an African American girl. Jodie was much more well adjusted than most others at Lawndale high, or at least it seemed that way. Her parents put a lot of pressure on her to set an example. This show will feature many of the other characters from Lawndale in cameos throughout the story.

One of the things I wished that we saw more of was Jodie’s story in the original show. We only ever really scratched the surface of this character. Now with the new show coming we will get to see how she goes on in her adult life. Her relationship with Daria was there it was kind of off to the side when it came to character interactions. Jodie would sometimes seek out Daria and ask her opinion on something, and would be met with a sarcastic comment.

Tracee Ellis Ross will be voicing her and they couldn’t have chosen a better person for the job. She told Variety, “I am thrilled to bring this project to life with MTV, both as executive producer and by voicing Jodie’s character. Being able to give voice to fresh, feminist and unexplored stories of young women excites me. We will feature a diverse cast, comprised mainly of unapologetically smart and ambitious young female characters who are vulnerable and flawed and interesting and funny….‘Jodie’ will be the first adult animated show in almost 20 years that will star a black woman. It will be a smart, funny workplace comedy full of commentary about everything from gentrification to sex to tech to call-out culture.”

Ross will also be an executive producer on the project. The show is to be written by creator Grace Nkenge Edwards. Edward’s is known for her work on Unbreakable Kimmy Schmidt and HBO’s Insecure. Also executive producing will be MTV’s Trevor Rose, Morgana Rosenberg and Amy Doyle.

MTV is bombarding us with major nostalgia this year as we can expect Celebrity Deathmatch to happen any time now. What other MTV shows would you like to see come back?

Are you excited to see more sarcastic and fresh comedy from MTV? Did you watch Daria when it first aired? Tell us in the comments!